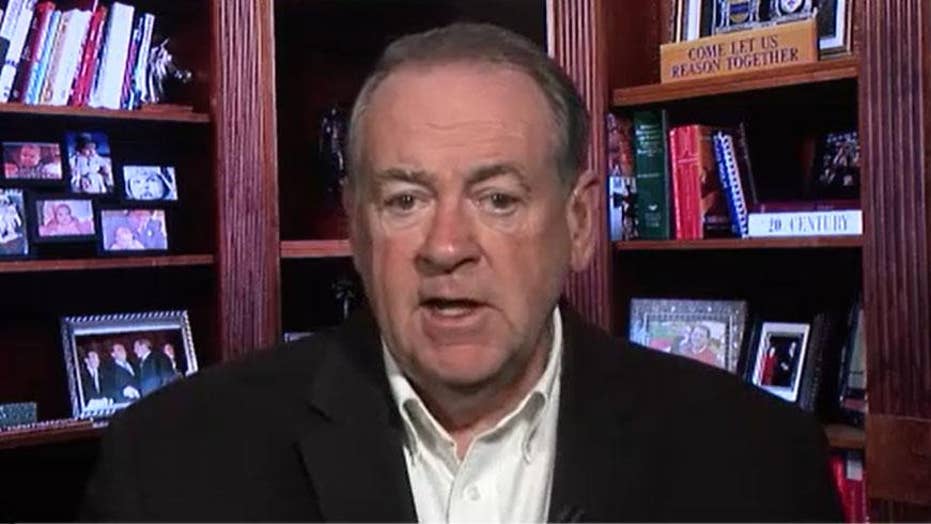 Is impeachment fracturing America? Former Arkansas Governor Mike Huckabee explains how Democrats will be responsible for the re-election of President Trump

House Democrats aren’t running an impeachment inquiry, they’re producing political theater. But it’s not theater that would ever play Broadway. In fact, it wouldn’t be good enough for a third-grade school play. After a week of open hearings, the political motivations behind their crusade against President Trump are plain for all to see.

After the first day of failed hearings on Wednesday, Democrats went into panic mode. They called focus groups, tried to change their accusations against President Trump from a “quid pro quo” with the Ukrainian government to “bribery,” and then launched a brand new charge against the president.

They have no evidence and are willing to say anything to impeach President Trump. They have their verdict, but the Democrats have changed their reason for the phony impeachment more than a baby’s diaper — and for the same reason.

During Ambassador Maria Yovanovitch’s testimony on Friday, Democrats treated the American public to their most ridiculous accusation yet: witness intimidation. What will be next? That President Trump orders his steak well-done and puts ketchup on it? Frankly, that’s more offensive to me than ANYTHING they have falsely accused him of yet!

The notion that President Trump’s public observations regarding the impeachment inquiry can constitute a “high crime” or “misdemeanor” is itself laughable but also illustrates the Democrats’ manipulative approach to the impeachment process.

Midway through Friday’s hearing, Representative Adam Schiff interrupted his questioning of Yovanovitch in order to read her a contemporaneous tweet the president had posted explaining his reason for removing Yovanovitch from the Ukrainian embassy post, which involved her poor track record in politically sensitive regions.

Adam Schiff read the tweet into the record as a pretense for launching a new accusation against the president. He knows that the Democrats’ existing charges are bogus, and he wanted to hedge his bets.

As Schiff — a lawyer — should know perfectly well, President Trump’s tweet was not even close to the legal definition of witness tampering. “Witness tampering” or “witness intimidation” is defined as an act of attempting to improperly influence, alter, or prevent the testimony of witnesses. But Yovanovich was not even aware of the tweet until Adam Schiff read it to her. How could she be “intimidated” by something she could not possibly have been aware of? If anyone was trying to use the tweet to influence her testimony, it was Schiff.

The notion that President Trump’s public observations regarding the impeachment inquiry can constitute a “high crime” or “misdemeanor” is itself laughable, but also illustrates the Democrats’ manipulative approach to the impeachment process.

When it’s beneficial to them, Democrats insist that the impeachment inquiry is a “political process” — a description they interpret to mean that they can ignore due process and impeach the president for actions that don’t violate the criminal code. But at the same time, they treat the House Intelligence Committee like a court of law when they find it appealing, even comparing it to a grand jury.

If the impeachment inquiry is a political process, then President Trump is fully within his First Amendment rights to offer commentary on the proceedings. His comments are political speech addressing a political development.

That’s not to mention the fact that a president can fire any ambassador any time he wants, just as President Barack Obama fired all of George W. Bush’s top diplomats.

But if Democrats want to insist that President Trump is “intimidating witnesses,” then they have to give him his right to due process. They haven’t even allowed Republicans to call a single witness to the stand, much less allowed the president’s counsel to cross-examine their cherry-picked “witnesses.” Americans understand the fundamental constitutional right of the accused to confront his accuser, but the Democrats don’t care.

They’ve changed their allegations against the president repeatedly, called witnesses with no direct experience relevant to the facts the Democrats initially sought to investigate, and have trumped up ridiculous obstruction of justice charges as a backup in case all else fails.

It’s political theater, but it doesn’t even follow a coherent plot. Rep. Devin Nunes adroitly described the inquiry as the “low-rent sequel” to the Russia hoax, accurately depicting this charade. In fact, the Democrats’ impeachment drama is rapidly becoming a parody of itself.