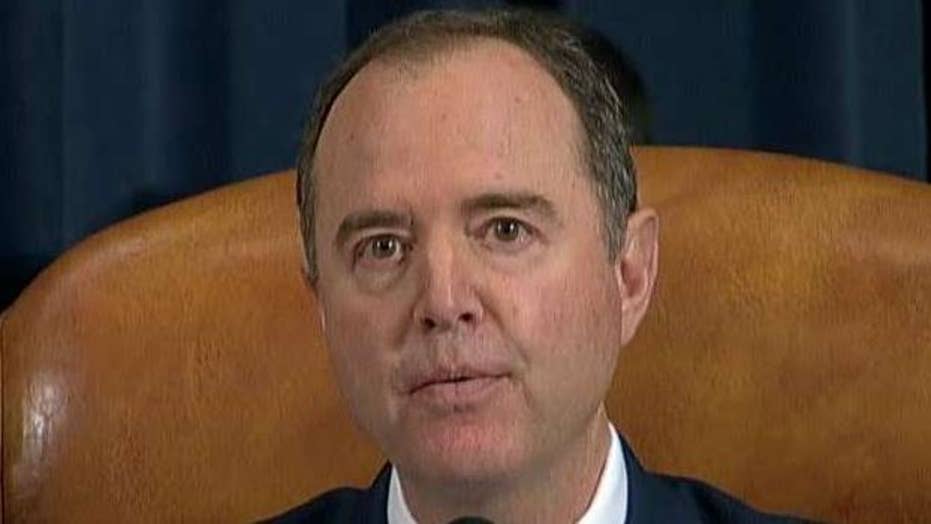 Schiff: Yovanovitch was smeared, cast aside for being an obstacle to Trump's agenda

Adam Schiff has made a complete hash of the Democrats’ impeachment inquiry. The decision by the California Democrat and House Intelligence Committee chairman to conduct the first series of interviews behind closed doors allowed Republicans to appropriately brand the enterprise as unfair and clandestine.

His next step, orchestrating a steady stream of leaks and disclosures timed and edited for maximum impact, all but guaranteed that last week’s subsequent live hearings would be anti-climactic.

Schiff stole his own thunder.

In addition, he has not been straightforward about his dealings with the whistleblower, who initially was pivotal to charges against the president but who is now deemed inconsequential by Schiff.

It is common knowledge that the initial complaint was launched by a Democrat with ties to President Trump’s adversaries. That revelation has sucked even more legitimacy from the investigation.

As a result of these several missteps, the public is wary of what has emerged as an obviously partisan attack on a duly elected president. Worse, they are also, already, bored and, we’re not even in the home stretch.

If Americans turn against the impeachment effort, they will punish Democrats for not attending to other, more important, priorities. Let’s face it, impeaching the president will not make our roads better or lower drug costs.

Adding to the public’s ennui is that the resolution of the impeachment is a foregone conclusion. It’s like Agatha Christie revealing whodunit in Chapter One; it steals the story’s punch.

We know Democrats will press forward with their tiresome questioning and posturing, hoping to convince the nation that the hearings are something bigger and nobler than a political stunt. They will vote to impeach; that has always been a foregone conclusion.

The carnival will then move to the Senate, which will ultimately hold a trial and find the president not guilty of high crimes and misdemeanors. Democrats know this; they know there is no real purpose to their impeachment thrust but to undermine Mr. Trump before the 2020 campaign.

It's a risky way to win an election. If Americans turn against the impeachment effort, they will punish Democrats for not attending to other, more important, priorities. Let’s face it, impeaching the president will not make our roads better or lower drug costs.

Also, a partisan investigation will energize Trump supporters and drive turnout among Republicans.

Even the Trump-hating New York Times struggled to find much meaning in the impeachment proceedings. In their coverage of the first day of hearings, reporter Peter Baker was reduced to  glorifying star witness and diplomat William Taylor’s appearance: “the image, at least, of a wise, fatherly figure” with a “chiseled face and reassuring gray hair”  whose “deep baritone voice [was] reminiscent of Walter Cronkite.” Channeling Gregory Peck apparently enhances Taylor’s credibility.

The liberal media did hyperventilate over Taylor’s “new” revelation that someone on his staff “asked Ambassador Sondland what President Trump thought about Ukraine.” Sondland, according to the aide, according to Taylor, said the president “cares more about the investigations of Bidens.” In other words, third-hand hearsay.

Disappointing to Democrats, Taylor refused to climb aboard the impeachment train. Moreover, that Taylor had never once met with or talked to President Trump undermined the impact of his testimony, notwithstanding his admirable elocution.

To be sure, it is clear that Taylor disapproved of President Trump’s reportedly tying $391 million in aid to Kiev to an investigation into possible misdeeds by Joe Biden and his son Hunter. He said that holding up that assistance for political purposes is wrong. It is unclear what Taylor thought of President Obama’s steadfast refusal to authorize that much-needed help during his administration.

Ambassador Marie Yovanovitch, who was sent back to the United States because the White House heard she was openly critical of the president, was not even in the Ukraine when the events under review took place.  The president is entitled to have representatives in foreign countries who are on his team. End of story.

Taylor, Yovanovitch and other witnesses, including the still missing-in-action whistleblower, have no first-hand evidence that Trump threatened to withhold aid in exchange for an investigation into the Bidens. That is still a critical missing link.

As the inquiry drags on, more Americans will tune out. The TV audience on the first day of the Schiff show was far less than the number who watched the confirmation hearings for now-Supreme Court Justice Brett Kavanaugh or even Michael Cohen’s testimony.

Schiff himself was tweeting his followers to watch in an embarrassing effort to gin up enthusiasm. The audience will shrink further.

Democratic candidates slugging it out in Iowa and New Hampshire are rarely asked about impeachment. Instead, voters ask about health care and other issues; campaigners are struggling to explain how they are rewarding voters for giving their party the majority in the House.

Some of those candidates will soon view the impeachment drive as an even bigger threat. Senators Elizabeth Warren, Bernie Sanders, Amy Klobuchar, Kamala Harris, Michael Bennet and Cory Booker – all 2020 candidates – will have to participate in the eventual Senate trial. That means they will have to sit in the Senate day after day, while rivals like Joe Biden and Mayor Pete Buttigieg run circles around them on the campaign trail.

It is almost inconceivable that Democrats have allowed Adam Schiff to play ringmaster for this circus. As a major author of the Russia collusion narrative, Schiff was already reviled on the right.

As he leads his own party down the impeachment rabbit hole, Schiff may come under fire from Democrats as well, and especially from those senators trying to win the primaries.

And let’s not forget the damage Schiff has done to front-runner Joe Biden. After all, the one critical part of the Ukraine story that is regurgitated with each telling is that Biden’s son Hunter monetized his father’s unique status not only in Kiev but also in China. That has soiled the former vice president’s candidacy.

The hearings are not over but it is hard to see today how impeachment will prove a winner for Democrats. Nancy Pelosi should have stuck to her guns, and never let this process move forward, and especially with Adam Schiff at the helm.