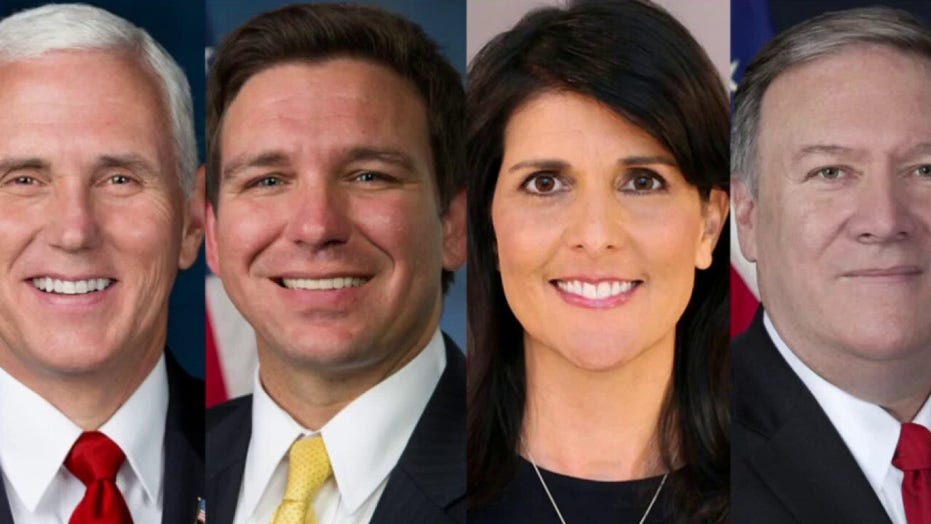 'Gutfeld!' panel analyzes the candidates Democrats are most concerned about in 2024

Republicans in Virginia will choose their nominees for governor, lieutenant governor and attorney general at their party’s convention this Saturday.

All three positions are currently held by Democrats. Likewise, the state’s entire House of Delegates is up for re-election and the Democrats hold just a 10-seat majority there.

I’ve lived in Virginia for more than two decades and watched this state go from red to purple to bright shiny blue. If ever there was a year when Republicans had a shot at returning the Old Dominion to its red roots it’s this year.

It’s understood that Virginia's off-year election results are often used to take the pulse for the mid-term congressional elections. That’s why national figures such as former Trump White House Press Secretary Sarah Sanders and Senator Ted Cruz, R-Texas, have been in Virginia stumping for Republican candidates in the primary, rather than holding out until the general election to put their name behind a nominee.

This pandemic shone a bright light on the utter incompetence and opportunism of the worst of Virginia’s leaders, exposing them as pawns for teachers unions and poster people for extreme government overreach. The Democrat campaign slogan this election cycle could easily read "Never let a good crisis go to waste."

And they certainly didn’t. You’ve heard the phrase "carpe diem" — seize the day. They seized the whole darn year.

They simultaneously managed to encroach on our freedoms, shut down our businesses, play politics with science and torch our education system all at the same time. The year can be summed up as one big dumpster fire.

They overplayed their big government hand in a big way. And the right Republican nominee, with the right messaging and the right reach can put out the fire.

The Democrats ’ likely nominee for governor is Terry McAuliffe, the former Virginia governor and Bill Clinton BFF whose campaign pockets are lined with cash from the teachers union.

Been there, done that. If there’s one thing this government-issued lockdown has taught us, whether it’s the White House or the State House, we don’t need anyone calling the shots when they’re beholden to the teachers union.

Most of the Republican gubernatorial candidates get this joke. Whoever is the nominee will undoubtedly make education, specifically in-person learning and school choice, top issues this fall in arguing for a change in Virginia’s leadership.

Virginia’s state capital has more baggage than a 747. In 2019, Lt. Gov. Justin Fairfax was accused by two women of sexual assault, Attorney General Mark Herring admitted to wearing blackface in 1980, and also in 2019 Governor Ralph Northam admitted he was in a racist photo that surfaced in his medical school yearbook.

The photo showed someone wearing a KKK robe and hood standing next to someone wearing blackface. However, the next day he did a 180 and said he was mistaken and it wasn’t him after all.

Shockingly, even with blatant racism and credible allegations of sexual assault at the forefront, all three of their political lives were resuscitated. All’s well that ends well.

Unless you live in Virginia and have to live under their anti-business, pro-lockdown reign.

When COVID numbers were going down and other states were successfully opening up and it looked like there was finally a light at the end of this long, dark tunnel the heavy hand of big government would come down and move the goalposts.

It was fuzzy science at its finest dictating how many people we were "allowed" to interact with outdoors, telling restaurants what time they had to close, and bars they couldn’t even open. And my personal favorite, giving grownups a curfew. I haven’t had one of those since I was a teenager. But apparently, COVID is more dangerous outside after midnight.

If Virginia elects McAuliffe we’ll get the same scene, different movie — minus the racist photo scandal — but with all the big government grabs.

At the time of Northam’s blackface scandal, McAuliffe joined a chorus of people, including then-Vice President Biden and Sen. Kamala Harris, who called for his resignation. However, in this election cycle, everything seems to be forgiven, to the point that he’s deferring to Northam’s judgment when asked about things like guidance in opening up our schools.

Our next governor should be one who questions the judgment of our current governor, definitely not one who relies on it.

Virginia’s government is deeply broken. The country is watching our state, ready to read the tea leaves for 2022. If Virginia does its job, those tea leaves will say we’re done with big government politicians, we want leaders who shake out the baggage and disrupt the status quo.