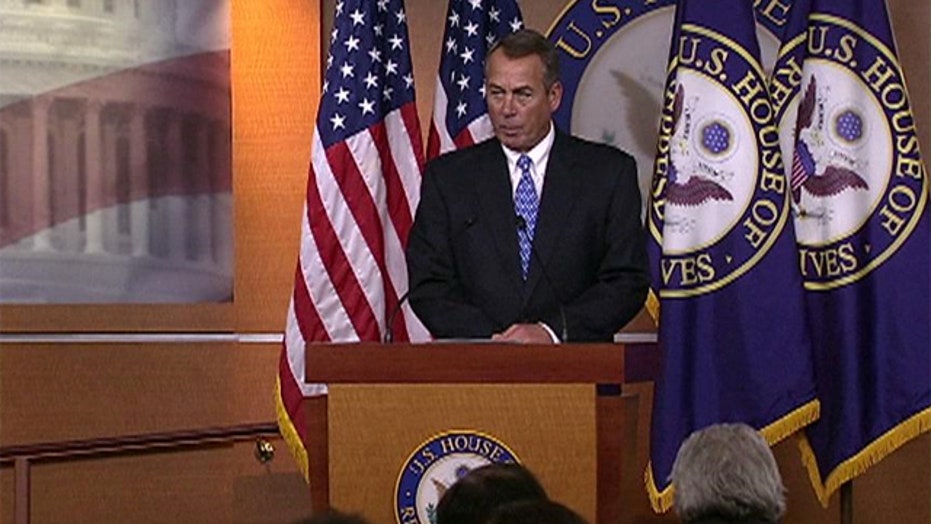 What could House passing immigration reform mean for GOP?

So. The Democrats are in freefall. Their "landmark" legislation -- ObamaCare, rammed through without a single Republican vote -- is in collapse. The president has been exposed as a liar (see: "If you like your health plan, you can keep it. Period.").

His poll numbers are tanking, from job approval to competency to trustworthiness to personal likability. The poll numbers for the Democrat Party are in the gutter as well, with the Republican Party now pulling ahead on the generic ballot.

Democrats are fleeing the scene of their own accident, refusing to be seen with the president and distancing themselves from the wreck that is ObamaCare.

In other words, the Democrats are on the run, vulnerable, weak, and poised for a major defeat.

So what are the Republicans doing? Are they going for the jugular, attacking nonstop until November and showing no mercy? (In other words, acting like Democrats...) Of course not. They're Republicans. They are stepping in to help the Dems out.

Instead of pounding ObamaCare and the president and the Democrats with the facts of an atrocious stab at socialized medicine and the lies they've used to push it, the GOP appears ready to snatch defeat from the jaws of victory by switching gears to the highly polarizing issue of immigration.

Never mind that immigration doesn't even score more than 2 percent in polls asking what the most important issue is to the country. Rather than let this sleeping dog lie (at least through November), the Republican leadership is jumping to the assistance of the Democrats by supporting amnesty.

Remember this CRITICAL POINT: For Obama and the left, no issue is about the stated issue. It's ALWAYS about something bigger and more profound – namely, as Obama put it in 2008, "the fundamental transformation of the nation."

ObamaCare was never about your health care. It was about government power and control.

And so it is with immigration "reform." For Obama and the Left, it's not about actually dealing forcefully and effectively with the immigration issue.

If that were the case, the administration would be faithfully enforcing the laws we have on the books. It is not.

They seek this "reform" for one simple reason: because immigration is the final missing piece of the "fundamental transformation of the nation."

If they can get amnesty for 12 million (who knows what the real number is? 12 million? 18 million? 30 million?) illegals, they know they’ve got the country in a headlock. Most Hispanics are natural Democrat voters.

Not all, obviously. Many believe in hard work, individual liberty, economic liberty, and obeying the law.

But the majority vote Democrat, and the party has been working hard to lock them into government dependency.

If amnesty goes through, the Democrats will flood the zone with millions of more Democrat voters, possibly flip Texas blue, and get their long-sought-after permanent Democrat voting majority.

If that happens, you will never again see a Ronald Reagan or a George W. Bush. You may never again see a GOP majority in Congress. The Republicans will be relegated to permanent minority status. And a shrinking one at that.

This is the goal of the Democrats. Why on earth would Republicans want to help them achieve it?

Because they think they'll be "rewarded" by Hispanic voters?

That didn't happen after the 1986 amnesty. In fact, the percentage of Hispanics voting GOP actually went DOWN after that amnesty.

To take the issue off the table? Forget it. As soon as the path to amnesty is in place, Democrats will accelerate the process to get them voting as fast as possible, so the "issue" will never be off the table for Republicans.

Obama and Nancy Pelosi and Harry Reid and Chuck Schumer and Organizing for Action and George Soros and Eva Longoria and everyone else on the extreme left must be laughing out loud at the pure, destructive stupidity of the Republicans. They've got the Democrats on the ropes, and they're throwing them a lifeline.

While strangling themselves right out of existence.