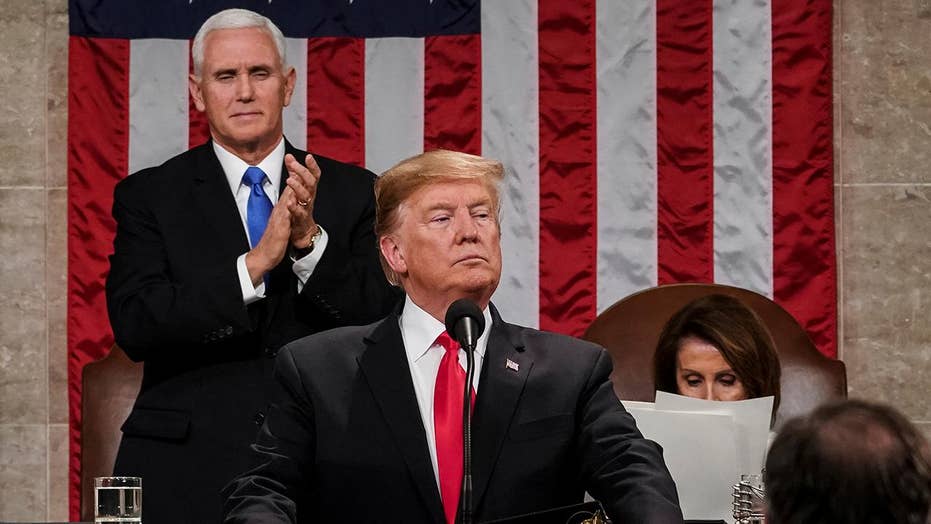 Nancy Pelosi's 'iconic' clap celebrated by Democrats; Raymond Arroyo has this week's edition of Seen and Unseen on 'The Ingraham Angle.'

President Trump’s State of the Union address was deliberately structured to emphasize unity and bipartisanship, yet the obstructionist Democrats refused to acknowledge his best overtures.

Instead, they sat in silence, contorting their faces into expressions of disdain or boredom even when the president delivered unambiguously good news or proposed policies that Democrats have historically supported.

Here are the 10 best quotes in President Trump’s State of the Union address that anyone with a souund head and heart would support  -- but that failed to draw applause from Democrats.

#1 Jobs: Apparently, Democrats don’t care much for jobs, because they did nothing but scowl when President Trump reported that more Americans now have jobs than ever before – 157 million. Their silence was even more palpable when he reported that “nearly 5 million Americans have been lifted off food stamps” thanks to all that job creation.

#2 Record-low minority unemployment: Even when President Trump boasted that “African-American, Hispanic-American and Asian-American unemployment have all reached their lowest levels ever recorded” Democratic lawmakers looked pained instead of proud.

#3 Health care: Only one Democrat stood to applaud when the president highlighted the Right to Try bill, which gives critically ill patients access to lifesaving cures. Democrats were similarly unenthused by his commitment to bring down exorbitant prescription drug prices. “It is unacceptable that Americans pay vastly more than people in other countries for the exact same drugs, often made in the exact same place” the president said, closely echoing a point Democrats have been making for years.

By sitting stone-faced through even the most bipartisan elements of the president’s unifying State of the Union address, the Democrats once again demonstrated that they care more about obstructing Trump than they do about looking out for the interests of the American people.

#4 Cutting stifling regulations: “We’ve cut more regulations than any other administration in its entire tenure,” President Trump said, receiving applause only from the Republican side of the House chamber.

#5 Energy independence: Democrats couldn’t even bring themselves to cheer for energy independence, a longtime bipartisan goal. “We have unleashed a revolution in American energy. The United States is now the Number One producer of oil and natural gas anywhere in the world. And now, for the first time in 65 years, we are a net exporter of energy,” President Trump said. Sen. Joe Manchin of West Virginia was the only Democrat to applaud the line.

#6 Veterans: President Trump praised bipartisan efforts to deliver “historic VA reforms” in the last Congress, noting that “after four decades of rejection, we passed VA Accountability so we can finally terminate those who mistreat our wonderful veterans.” Most Democrats remained glued to their seats, refusing to applaud these new protections for the men and women who risked their lives to protect America and now rely on the Department of Veterans Affairs for health care and other services.

#7 Combating anti-Semitism: While Democrats never pass up an opportunity to accuse the president of bigotry, they were thoroughly disinterested in his call to resist hatred “anywhere and everywhere it occurs.” While President Trump decried anti-Semitism, House Speaker Nancy Pelosi thumbed through her copy of the speech with an air of supreme boredom.

#8 Fair trade deals: “Tonight I am also asking you to pass the United States Reciprocal Trade Act, so that if another country places an unfair tariff on an American product, we can charge them the exact same tariff on the exact same product that they sell to us,” President Trump said. While Democrats would have salivated over that proposal only a few years ago, they now oppose it as vehemently as every other policy they associate with President Trump.

#9 Stopping Infanticide: When President Trump asked Congress “to pass legislation to prohibit the late-term abortion of children who can feel pain,” Democrats silently seethed, knowing his request was a direct response to legislation in New York and Virginia allowing abortions all the way up to the point of birth.

#10 Anti-socialism: The dismayed expression on the face of Sen. Bernie Sanders. I-Vt., spoke volumes when President Trump boldly declared: “Tonight we renew our resolve that America will never be a socialist country.” That sentiment used to be taken for granted by both parties, but today’s Democrats are openly advocating the sort of policies that have contributed to the ruination of countries like Venezuela.

By sitting stone-faced through even the most bipartisan elements of the president’s unifying State of the Union address, the Democrats once again demonstrated that they care more about obstructing Trump than they do about looking out for the interests of the American people.