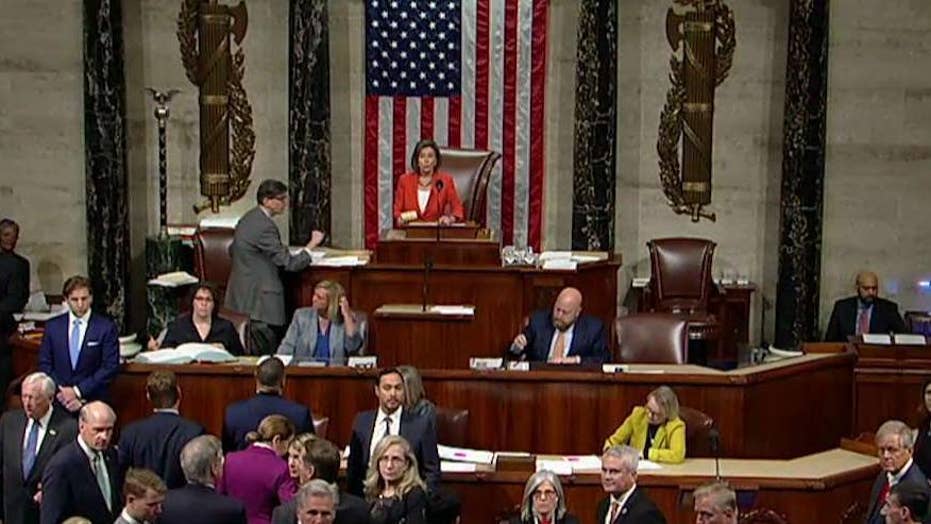 Will vulnerable House Democrats toe the party line on impeachment?

After two weeks of hearings by the House Intelligence Committee that failed to show President Trump has done anything to justify his impeachment, the House Judiciary Committee announced Tuesday that it will hold yet another impeachment hearing Dec. 4.

Democrats are determined to keep looking for something – anything – to strengthen their absurd impeachment case against the president.

Judiciary Committee Chairman Jerrold Nadler of New York – a highly partisan Democrat who’s been suffering from a severe case of Trump Derangement Syndrome for years – has made it clear that he is determined to impeach Trump despite the lack of evidence.

Nadler even invited the president and his counsel to participate in what promises to be a kangaroo court proceeding, focused on proving why Trump should be impeached. Trump can expect as much fairness out of this proceeding as a political prisoner in the old Soviet Union would get in a show-trial.

It was Nadler’s committee that was thoroughly embarrassed by former Trump campaign manager Corey Lewandowski in a failed attempt by committee Democrats at an impeachment hearing in September.

Democrats know the Senate will not convict Trump and remove him from office after a trial, because the Democrats would need the support of at least 20 Republican senators for such an unprecedented action. So the goal of House Democrats is to throw every accusation they can think of at the president – no matter how absurd – with the hope that this will make him easier to defeat him in the election one year from now

But the American people are smarter than Democrats give them credit for. So the impeachment-obsessed Democrats are making no progress in convincing voters that the president should be kicked out of office.

Many polls are indicating that House Speaker Nancy Pelosi and Intelligence Committee Chairman Adam Schiff, both California Democrats, have failed to convince the American people that the allegations surrounding a routine phone call between President Trump and Ukrainian President Volodymyr Zelensky rise to the level of an impeachable offense.

In fact, as people across the country hear the scant evidence and observe how the Democrats are conducting the investigation to suit their misleading narrative and political needs, public support is moving in the opposite direction from what Democrats want.

While each party’s base of support is unlikely to change its position on impeachment, critically important independent voters – as well as voters in two top presidential battleground states – are showing signs of souring on the impeachment-hungry Democrats.

According to FiveThirtyEight averages of polls, independent support for impeachment has trailed off by more than six points over the past month.

Emerson has found an even more dramatic swing, according to recent polling. The well-respected poll reported:  “The biggest swing is among Independents, who oppose impeachment now 49 percent to 34 percent, which is a reversal from October where they supported impeachment 48 percent to 39 percent.”

Meanwhile, in the Rust Belt states of Wisconsin and Michigan – which provided the electoral votes that helped elect Donald Trump president – support for impeachment is upside down and the similarity in the numbers is noteworthy.

According to a recent Marquette University survey, impeachment is only supported by 40 percent of Wisconsinites, with 53 percent opposed.

And in neighboring Michigan, I commissioned a poll late last week that found only 40 percent supporting impeachment as well, with 45 percent in opposition. These bad numbers for Democrats are no coincidence; the public is dubious of this politicized impeachment effort – and with good reason.

Recent history has taught us that high-stakes impeachment investigations that are seen as partisan and heavy-handed can backfire on the accusers. In 1998, Republicans failed to win over the public in favor of removing President Bill Clinton from office but decided to move forward with impeachment at their own peril. Voters went on to reward Democrats during the midterm elections that year with a five-seat pickup in the House.

The stigma of partisanship is destroying the Democrats’ drive to impeach in 2019 as well. Rep. Schiff’s inability to tell the truth, his secret deposition dungeon in the basement of the U.S. Capitol, and his refusal to allow Republican witnesses is taking its toll.

The American people understand fairness, due process, and the presumption of innocence – and they know this investigation lacks those honorable attributes. They are instead witnessing an illegitimate political witch hunt to take down the duly elected president of the United States – something commonsense American taxpayers won’t stand for.

If Pelosi and Schiff decide to ignore data and public sentiment and plow forward with a vote on articles of impeachment and get the support of 218 House members, the process would then move to the Senate for a trial

But in order to get to 218 votes in the House, many of the Democrats representing districts carried by Trump in 2016 would be putting their seats on the line by voting yes. I’m currently running “Stop Impeachment” ads in five of those districts to put pressure on these vulnerable Democrats.

If an article of impeachment gets to the Senate, the Republican majority will endeavor to operate under a much different process than the Trump-hating radicals in the House. First and foremost, President Trump would be allowed legal representation and would be able to defend himself against the false charges being lobbed by Schiff and company.

President Trump would also be able to call his own witnesses. It’s logical to believe that many of the same individuals that House Democrats declined to allow would then have to testify before the Senate.

Here’s a hypothetical witness list that would provide for a much more balanced experience than Schiff’s one-sided kangaroo court:

Hunter Biden should be called to testify so the American people can learn about the alleged quid pro quo involving his father – former Vice President Joe Biden – and the firing of a Ukrainian prosecutor in exchange for foreign aid.

The anonymous whistleblower should testify about his political allegiances and motivations, his anti-Trump bias, and his relationship with Schiff and members of Schiff’s staff. He should also answer questions about the Obama administration’s anti-Trump activities involving Russia and Ukraine.

Intelligence Community Inspector General Michael Atkinson should be called in to discuss why he viewed the whistleblower’s story as an “urgent concern” if Schiff doesn’t think it’s important enough to have the whistleblower testify. The public also has a right to know if Atkinson had any role with the Carter Page Foreign Intelligence Surveillance Act applications when he served in the National Security Division at the Department of Justice.

Former Democratic National Committee Contractor Alexandra Chalupa should come in to answer questions under oath about her dealings with Ukrainians to dig up dirt on then-candidate Donald Trump and his campaign during the 2016 presidential election.

Schiff himself should be called as a witness. Schiff must answer questions about his false statements made to the public and everything he knew about the whistleblower’s complaint and when he knew it.

Testimony from these individuals in a potential impeachment trial in the Senate next year would blow a gaping hole in the Democrats’ already weak case for impeachment.

For Nancy Pelosi, a word of caution: polls supporting President Trump’s impeachment won’t get any better; in fact, they’ll only get worse. Your attack dog Schiff failed to make the case – but there’s still time to change direction and focus on policy issues that the American people care about.