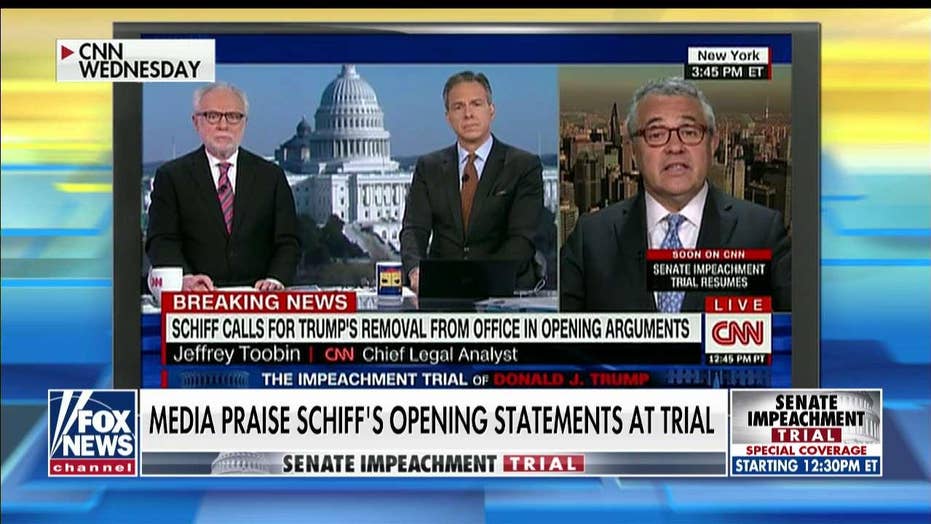 The anti-Trump media are sparing no effort to proclaim their love for their hero in the Trump impeachment drama – House Intelligence Committee Chairman Adam Schiff, D-Calif.

As the lead House manager in Trump’s Senate impeachment trial now underway, Schiff’s lengthy assault on the president has drawn so many positive comments that Trump haters in the media are straining to find synonyms for “brilliant” as they heap praise on him. It’s a wonder they aren’t calling for his likeness to be added to Mount Rushmore.

No news organization has praised Schiff more than CNN. It’s probably not even possible. The combined network team dropped the word “very” 11 different times during one impeachment trial break to underscore how very, very much they loved his presentation.

“The Lead” anchor Jake Tapper described what Schiff was “very forcefully saying.” Tapper also noted Schiff’s speech was “a very factually based argument” and “very long, two and a half hours.”

CNN analyst Joe Lockhart, who was White House press secretary when President Bill Clinton was impeached and has worked for many Democratic politicians, tried a different strategy. He made news the old-fashioned, fake way.

Lockhart tweeted about a supposed discussion between Republican senators where one said of the Democratic accusations against Trump: “I haven't heard any of this before. I thought it was all about a server. If half the stuff Schiff is saying is true, we're up s----- creek.”

That post received more than 10,000 retweets and 42,000 likes. But Lockhart followed it up a few minutes later, admitting: “OK maybe I made up the convo, but you know that's exactly what they're thinking.”

Lockhart was slammed for what he later termed a “joke.” The Babylon Bee response struck home: “Leave the satire to us; we'll leave the fake news to you.”

ABC tried a similar hype strategy. Senior National Correspondent Terry Moran could barely contain himself as he oohed and aahed about Schiff’s “senatorial eloquence” or his “meticulous” nature and the argument he made in “classic legal fashion.”

Former Newsweek editor Jonathan Alter made it sound like Schiff was ready to hold a concert on PBS. He declared: “I think it'll go down as one of the great performances.”

Perhaps future Schiff speeches will get their own soundtrack or win a Grammy.

Schiff was even compared to Daniel Webster, who went down in history as one of the great Senate orators. Esquire writer Charles P. Pierce said Schiff “was playing in the same league as Webster was 190 years ago.”

And Slate’s Tom Socca said that Schiff and his team have “all the facts and principles on their side.” To address that, Team Trump “had nothing to counter them with but nonsense and lies. Nonsense, lies, and 53 votes.” That number is key and Slate’s “Impeach-O-Meter” only gave Trump a “0.5% Chance of Removal.”

Congress and the National Press Club better stock up on Teddy Bears and Scotch for when this fiasco is over. Because the media and the left are going to need them both.