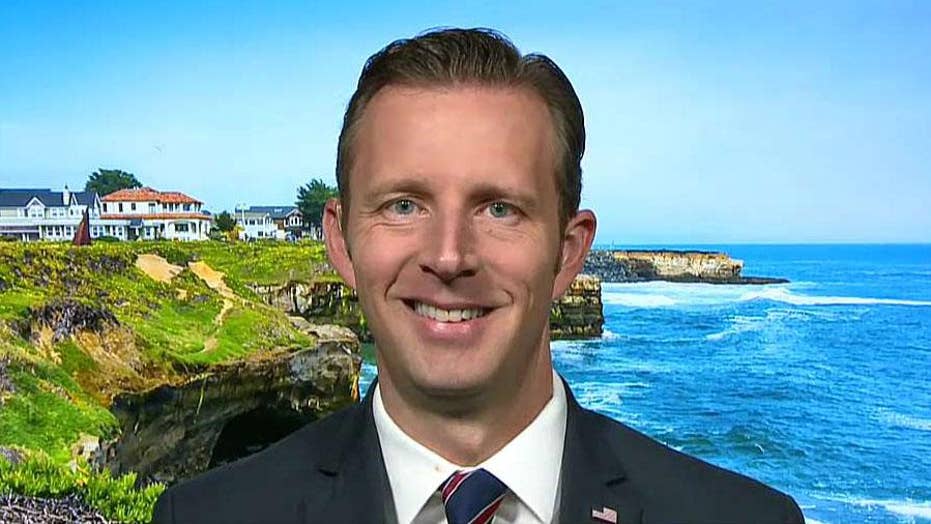 Former Obama campaign spokesperson Zach Friend says he’s not sure how second-tier Democratic candidates will be able to break through to the media amid the impeachment inquiry.

“A National Nightmare Is Upon Us!” Those are the words straight out of the mouth of NBC Political Director Chuck Todd.

In the eyes of journalists like Todd, “the basic rules of our democracy are under attack from the president.” Were that true (and it’s not), the only reason the press might be angry would be jealousy. They don’t like it when people play on their turf.

The news media have been undermining the basic rules of our democracy since before President Trump won the election. They started the war against Trump, not the reverse. The press promoted Trump to split the GOP and get Hillary Clinton elected. They turned on him only when they realized he might win.

It’s been war ever since. The so-called neutral press are the ones driving impeachment. They have begged the left to remove Trump since the election. Now they have amped up their comments to dangerously unhinged.

I’m talking about you, MSNBC.

In two separate incidents, the network said Trump was calling for violence. Washington Post reporter Eugene Scott told viewers the president was “encouraging those who feel victimized and disrespected to rise up and act out and push back, even if violently.” Lefty historian Jeffrey Engel followed up with talk of the Tiananmen Square massacre and warned Trump’s words “might start drawing heavily armed people to the National Mall to protect their president.”

He even concocted “a scenario where President Trump simply refuses to accept the will of the Senate or of the electorate in 2020.” In fact, the only people not accepting election results are liberals — from Hillary Clinton on down.

“Morning Joe” was almost as bad. Host Joe Scarborough pretended Trump was making “calls for civil war.” He declared the president’s actions were “getting dangerous and out of control.”

They are loving the impeachment inquiry so much that they are laughing about it.

Ethics Public Policy Center Senior Fellow Peter Wehner slammed Trump as a “sociopath” whose “pathologies” and “illegal conduct” have gotten worse. MSNBC Anchor Stephanie Ruhle doubled down on the assessment and grouped Trump in with “sociopaths.”

And not just at MSNBC. New York Times columnist Paul Krugman tweeted, “Starting to look like two possible outcomes: Trump and a number of others end up in jail, or thousands of journalists end up in prison camps.”

Times journalists are particularly upset at Trump using the term “treason.” This after most of the press pretended Trump was a Russian agent for close to three years.

Trump has a bigger reason to hate the press than any president in history, so where are these prison camps? I mean, if Trump were 1/1,000th the monster the press pretend, he’d have at least locked up some CNN staffers. But the biggest thing haters can point to is him kicking a few loud mouths out of the press room. Oh, and he doesn’t go to the lame White House Correspondents’ Dinner.

Times journalists are particularly upset at Trump using the term “treason.” This after most of the press pretended Trump was a Russian agent for close to three years. Heck, they outright accuse him of treason, but it’s OK when they do it.

But the phony Russia investigation was nothing in comparison to the impeachment inquiry. The Russian probe only targeted Trump. Now Democrats and their media allies are going for the whole megillah. They want to overturn the entire election. That means Vice President Mike Pence, Attorney General William Barr and, of course, Supreme Court Justice Brett Kavanaugh.

And some of them are betting they can, too.

Rep. Adam B. Schiff, D-Calif., is a key figure in the impeachment fiasco. As part of that, he denied speaking to the Ukraine whistleblower.

That claim was so false that even the Washington Post called him out. The Post’s Glenn Kessler gave the claim four Pinocchios and termed Schiff’s claim as “flat-out false.”

It likely won’t get a lot of media attention, but it’s still fun to watch the Post occasionally act like a real newspaper.

Journalists love to report on hate crimes — even when they are entirely bogus. They get extra credit if they can tie them in some bizarre way to the Trump administration.

This latest incident threw mud at Second Lady Karen Pence, who teaches at a Virginia Christian school. A 12-year-old African-American girl claimed that three white male students held her down and cut her hair.

It never happened. But before that dose of reality came out, ABC, CBS, NBC, CNN and MSNBC spent nearly 10 minutes targeting the school as racist. This follows media coverage attacking the same school as homophobic a while back.

Like so many media hyped hate crimes, this one turned out to be false, but still did horrific damage. How many million people heard the school was in the wrong and missed the tiny bit of time outlets spent correcting the record, if they did it at all. Because it’s never about news or accuracy any more. It’s just about scoring a hit on Team Trump.

And speaking of that...

Sometimes a news story is so poorly done that it warrants a follow-up. Bloomberg Law Senior Reporter Ben Penn tried to destroy the career of a Trump Labor Department nominee, falsely claiming the nominee was anti-Semitic.

It took a whole month but the outlet retracted the story and apologized to readers and appointee Leif Olson. It was long overdue and a prime example why most people never pursue corrections from news outlets.

The original story was horribly headlined: “Trump Labor Aide Quits After Anti-Semitic Facebook Posts Surface.” It was a blatant hit job trying to get Olson for his “history of advancing controversial conservative and faith-based causes in court.”

Not only was Olson innocent of the charges. He was actually making fun of anti-Semites. The story was such blatant garbage that it was bashed across the political spectrum.

Washington Post Media Critic Eric Wemple reported Friday night about the retraction. He cited how the results of a FOIA request from the Hamilton Lincoln Law Institute made the reporter look even worse. The documents show that Penn asked specifically “about whether [Olson] is fit for government service.”

Wemple had a nicer take on it than I do. He credited “haste and shoddy journalism” for the story. That’s being generous. Reporters know that it’s open season on anyone tied to the Trump administration. This time one got caught.

Since so many lawyers were involved in Olson’s defense, this might not be the last time we hear about this story. Here’s hoping.