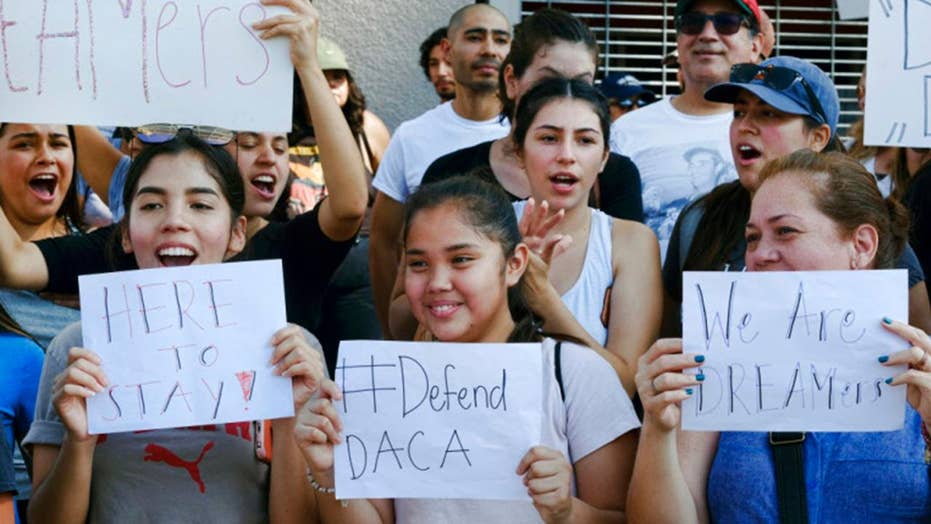 Push narrative that the president, Republicans are heartless reaction and analysis on 'The Five'

Journalism isn’t dead, but the liberal news media are trying hard to murder it in its sleep like Freddy Krueger would. That was evident in the news coverage of President Trump’s decision this week to phase out a program known as DACA (Deferred Action for Childhood Arrivals).

President Obama forced DACA on us in 2012 to allow illegal immigrant children known as Dreamers to gain temporary legal status to stay in the U.S. President Trump said the executive order issued by President Obama was unconstitutional and that it’s the job of Congress to change immigration laws.

This was a dream scenario for the Trump haters who dominate the media. There was no difference in tone from the far-left talking heads and the so-called journalists. Trump’s decision was called “cold-hearted,” “advancing a white supremacy agenda,” “cruelty” or even racist.

The night of the decision, the broadcast evening news shows devoted 99 percent of their coverage to defending DACA. Just 11 seconds were used to mention conservative talking points against the bogus immigration process designed to aid Dreamers. Satan could run for office and the networks would give him more positive coverage than this.

Imagine a sitting senator is prosecuted for bribery for the first time in 36 years. Sounds like a good story. Too bad the major media have either ignored it or hid the fact that the senator is New Jersey Democrat Sen. Bob Menendez.

That wasn’t all. Journalists hyped Obama’s defense of DACA like they were surprised he defended the garbage he forced on the American public. Because even if you support the Dreamers staying, doing it by executive fiat was wrong and illegal.

The Constitution gives Congress – not the president – the power to pass legislation. Once Congress acts, the president can sign bills into law – but he can’t just cut Congress out of the process and pass laws all by himself.

Nearly forgotten former NBC anchor Tom Brokaw tottered over to a microphone to claim, “the Republican Party has been declaring war on Hispanics in this country.” Only on the left do you equate people who are here illegally with millions who are citizens.

The Associated Press deployed my favorite bit of propaganda from the whole debate. In an article about DACA’s impact in Chicago, the wire service referred to illegal aliens as “undocumented citizens.” Sure, they are bound to be citizens of some country, but not of the United States. Here’s the actual BS quote: “[Chicago] school officials say about a third of the school’s students are undocumented citizens.” This is stunning, even in a climate where journalists essentially work for the Democratic Party.

2. Three Strikes And You’re Out: Imagine a sitting senator is prosecuted for bribery for the first time in 36 years. Sounds like a good story. Too bad the major media have either ignored it or hid the fact that the senator is New Jersey Democrat Sen. Bob Menendez.

First we had The New York Times story strangely leaving out Menendez’s party affiliation. Then the Times added the senator’s party affiliation on its third revision, according to News Diffs. And the important information was apparently added only after commenters on the Times website skewered the newspaper for hiding it. Even then, the Times buried the party ID in the fourth paragraph instead of featuring it prominently in the headline. Times Associate Managing Editor for Standards Phil Corbett called it simply a “dumb mistake.”

Then the broadcast outlets pretty much ignored the Menendez story. Only CBS News managed a brief mention of this pivotal trial. To top it off, NBCNews.com ran an Associated Press story that listed Menendez’s party as … Republican. Any one of those items would make the story look fishy. Combine them and you have to wonder if journalists think we’re all that stupid and easily fooled.

The United States went more than 12 years without a major hurricane hitting land. (Hurricane Sandy was only a Category 1 storm when it hit.) Journalists have been telling us since Hurricane Katrina that we’d have more powerful storms. Sooner or later they were bound to be correct.

So now we have two tragic and large storms and the media want desperately to tie them to climate change. The New York Times, Politico, and lefty journalism operations like ProPublica and the Columbia Journalism Review all pushed the climate change narrative.

Time Magazine hyped: “The One Number That Shows Why Climate Change Is Making Hurricane Season Worse.” Wacky BillMoyers.com wrote a ridiculous apocalyptic scenario. Under a header titled “The Permanent Emergency,” it included this quote: “As coastal cities slide into ruin and those who can migrate inland do so, inequality and relative depravation will increase.”

The truth is that the climate has always changed. There have always been big storms and horrific weather events – droughts, floods, blizzards and more.

Look now for news outlets to pretend that 97 percent of climate scientists support the belief that man is the cause of climate change. This article in the National Review rips that apart.

4. Hats Off To CNN: The news media wasn’t making fun of Melania Trump’s heels this week. It moved on to hats. CNN featured a complaint about the hat that President Trump wore during his trip to Texas.

The hat was merely a white hat with blue lettering saying “USA.” CNN decided to feature the frivolous complaints of a far-left organization that exists merely to attack the right. That group is CREW – Citizens for Responsibility and Ethics in Washington. CNN called it an “ethics group.”

CREW is part of the group of organizations run by lefty Hillary Clinton fan boy David Brock. He only resigned from chairman of the board in January and is trying hard to raise $40 million for his host of organizations that all target the right.

If you expected to learn any of that from CNN, you’d be mistaken. CNN reporter Julia Horowitz didn’t point out any of those salient facts. She just helped hype another ridiculous charge against the president. Perhaps her next ethics story ought to be about her employer and not Trump.

Hurray for Hollywood: Nothing embodies the true spirit of Tinseltown like a teen, incestuous lesbian sex scene. Nope, not joking. That was the plotline of this week’s “The Sinner” on USA Network. A coming-of-age story for an older sister went far below the gutter when the sister decided to teach her younger sister about what her boyfriend did with her. Must be easy to find writing work in Hollywood – as long as you have no morality, ethics or class.

There is some hope left in Hollywood. The trailer for an upcoming movie is thrilling fans. The true story is based on a popular Christian song, “I Can Only Imagine” and the trailer has already gotten 31 million views. Maybe some feel-good fare will cure what ails Hollywood this summer. Call it Chicken Soup for Their Souls.