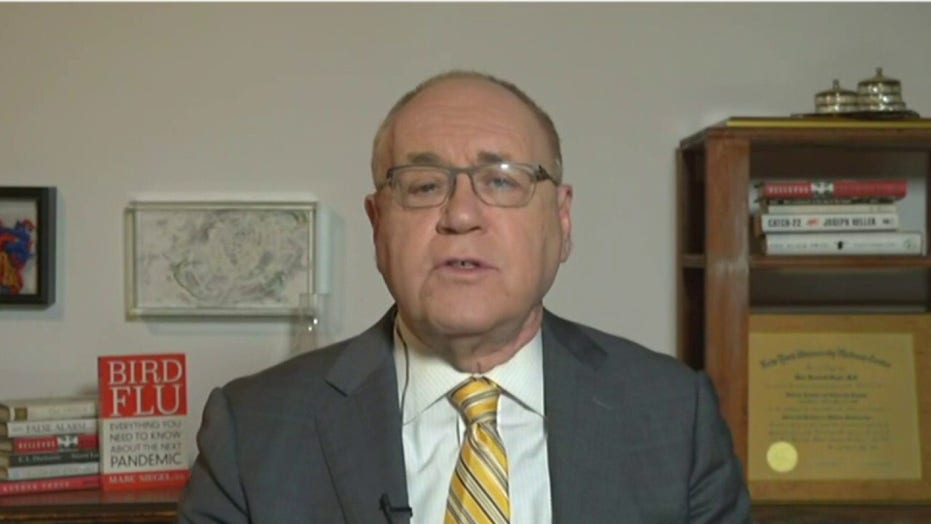 Dr. Siegel: WHO was absent on COVID-19, suppressed information

'WHO was a disgrace in how they handled this,' says Dr. Marc Siegel criticizing the World Health Organization for letting coronavirus spin out of control

The World Health Organization (WHO), which failed spectacularly to stop the COVID-19 outbreak, will meet virtually in just a few weeks. President Trump is expected to address the gathering in what will be his first public forum to reckon with the Chinese government over the delays, denials and duplicity that made the world sick — and to shame the leaders of the WHO for taking China’s obvious lies at face value.

The evidence of both is clear. The Tawainese government alleges it shared evidence of COVID-19’s contagious properties with the WHO in December. One of WHO’s own doctors said she suspected the virus was highly infectious “right from the start.”

Yet the WHO, led by Dr. Tedros Adhanom Ghebreyesus, continued to defer to the notoriously deceptive Chinese government, telling the world there was “no clear evidence of human-to-human transmission of the novel coronavirus” on Jan. 14.

Tedros went on to condemn the travel bans put in place around the world to prevent viral spread, and on Jan. 30, was praising China for efforts that were “very impressive, and beyond words.” The government of China, according to an opinion piece in the Washington Post, still “won’t share actual virus samples from the earliest cases. The Shanghai lab that first released the coronavirus genome was shut down for ‘rectification.’ Critics have been disappeared.”

Trump’s speech will also be a time to contemplate the future of the WHO — and America’s role in it. COVID-19 may be the WHO’s most large scale failure, but it is hardly the only one.

In 2014, the organization was widely condemned for its abject mishandling of Ebola. An expert review panel deemed the WHO’s response as “late, feeble and uncoordinated,” calling the WHO’s handling of the outbreak “an egregious failure.” A review by the Inspector General of the Department of Health and Human Services found the WHO slowed the entire global response by failing to “declare the epidemic an emergency until the epidemic had significantly expanded in West Africa.”

The corruption of the WHO and its affiliates, including the Pan American Health Organization (PAHO), have also been notable.

The U.S. should leave the WHO behind, and instead focus our existing capabilities on the global health partnerships we already have in place.

As recently as 2017, leaked documents revealed that the WHO spent more on luxury travel than they did on prevention and treatment measures for tuberculosis, AIDS and malaria combined. Tedros, for his part, is accused of covering up cholera epidemics in two countries, so as not to embarrass their leadership. A group of American doctors blasted him as “fully complicit in the terrible suffering and dying that continues to spread.”

The PAHO, an affiliate of the WHO that is financed by it, has also been accused of being complicit in human trafficking. A lawsuit filed by four Cuban doctors in 2018 alleges that PAHO “has collected over $75 million since 2013 by enabling, managing and enforcing illegal human trafficking of Cuban medical professionals in Brazil.” PAHO said they were merely helping the doctors “improv[e] their skills.”

Both PAHO and its parent organization also regularly promote abortion services. One of the “vital” services that the WHO has provided during the global COVID-19 outbreak was making sure that abortion services — including ensuring women could abort their children at home — were deemed “essential.”

The WHO has proven itself sorely inadequate to meet global health needs, particularly in a crisis. So what, if anything, is to be done?

The president has announced a pause on the nearly $500 million the U.S. provides to the WHO — most of it on a voluntary basis. The U.S. should not seriously contemplate returning these funds without significant reforms, including acceptance of Taiwan as a full member.

But given the makeup of the WHO — and dominance of the organization by the Chinese — such reforms are unlikely. Indeed, reforms instituted after the Ebola crisis have had minimal impact. So perhaps it is time for a different path.

The United States contributes $11 billion annually to global health needs throughout the world, a number that dwarfs its contribution to the WHO. Moreover, between our global health partners and domestic capacities at the Centers for Disease Control and the Office of Foreign Disaster Assistance at USAID, we have a tremendous capability to mobilize, prioritize and direct funding to health crises around the world.

The president should strategically prioritize the work the United States is already doing in this space, rather than rest the fate of a global health response in the hands of a corrupt and inept organization that would rather serve tyrants than the world’s sick.

COVID-19 has been a tragedy at a global scale — one that could have been avoided. But in crisis, there is opportunity. The U.S. should leave the WHO behind, and instead focus our existing capabilities on the global health partnerships we already have in place.

Rachel Bovard is the senior director of policy at the Conservative Partnership Institute.