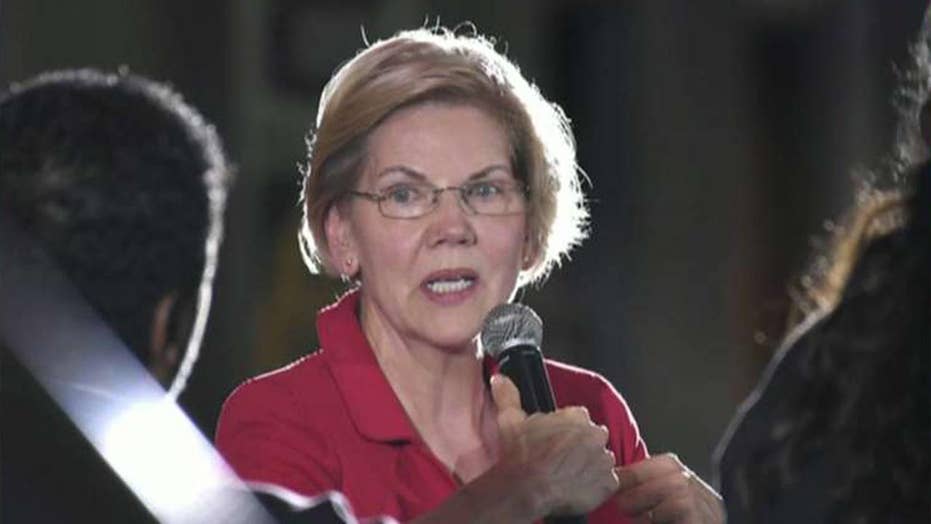 While opinions vary wildly on how the impeachment cookie will crumble, one thing is clear: Massachusetts Sen. Elizabeth Warren is the new frontrunner for the Democratic nomination. Don’t look now, but Warren was already well-positioned before impeachment added rocket fuel to her ascent.

The rise of the former Harvard Law professor was palpable all summer as she basked in an unceasing flow of fawning press coverage. Reporters marveled over the size of her crowds and selfie lines while applying little skepticism to her background or the price tag of her policy proposals. When the calendar turned to fall, polls in Iowa, New Hampshire and nationally all showed Warren pulling ahead of former Vice President Joe Biden, the erstwhile frontrunner in name only.

To those who think she’s too extreme, too divisive and too outside the mainstream to go the distance — we heard those same arguments four years ago amid the rise of another fire-breathing populist fueled by grievance politics. He currently calls the White House "home."

Yes, the brouhaha surrounding Ukraine will dominate the headlines for the foreseeable future, diverting attention from Warren’s momentum. But it also helps her in two separate ways. For one, the press will be distracted from diving into Warren’s past. At some point, even admiring news rooms will be forced to apply a modicum of scrutiny.

Secondly, Warren’s chief adversary, Joe Biden, resides in the blast zone of impeachment. Any discussion of Hunter Biden raking in $50,000 a month by Ukraine’s largest energy company is a loser for Team Biden. Voters inherently understand that Hunter wasn’t getting rich for his energy expertise — of which he has none. He was being paid for access to his father.

It reeks of the same charges of crony capitalism that sunk Hillary Clinton. Huge sums of foreign money flowing through the Clinton Foundation while Hillary was running the State Department led to the creation of a private email server — and the rest is presidential history.

Warren, on the other hand, can weave the Ukraine episode into her core campaign messaging railing about how "corruption is breaking our democracy." She can claim the barb is directed at Trump, but it has the added benefit of wounding Biden. Two birds, one stone. A true political gift.

So who is the best equipped to slow Warren’s roll? It’s not Trump — at least right now. He’s got his hands full with impeachment. Besides, any barb he throws Warren’s way elevates her frontrunner status with left wing voters who despise him.

It’s not the mainstream press — they are enraptured by Warren and her message. The only hard questions thrown Warren’s way came from a late-night comic when Stephen Colbert pressed her on the middle-class tax hikes she refuses to admit she’s pushing as part of her government takeover of health care.

It’s certainly not Biden. His lackluster quarter three fundraising numbers raised eyebrows about the health of his campaign. With Bernie Sanders sidelined after a heart procedure, there are new questions about the prospect of a commander-in-chief pushing 80 years old.

That leaves the rest of the winnowing Democratic field to do the heavy lifting. The clock is ticking. If they’re serious about breaking into the top tier, they need to start grabbing votes from those ahead in the polls. It will take work to chip into Warren’s base of support.

Both are steps in the right direction, but they are not going to sink Warren’s ship. Her greatest vulnerability lies in questions about her character. In particular, her past as a highly-paid corporate attorney — instances when she sided with the special interests and not the aggrieved middle class. It cuts at the core of who she claims to be. It is an episode in her life that has not yet been fully litigated.

There’s no more lethal political arrow than the one soaked in hypocrisy — and that’s what Warren’s corporate work exposes.

The next, best chance to educate the broader public about this issue comes at next month’s debate. Time will tell if any of Warren’s opponents seize the moment before it’s too late.