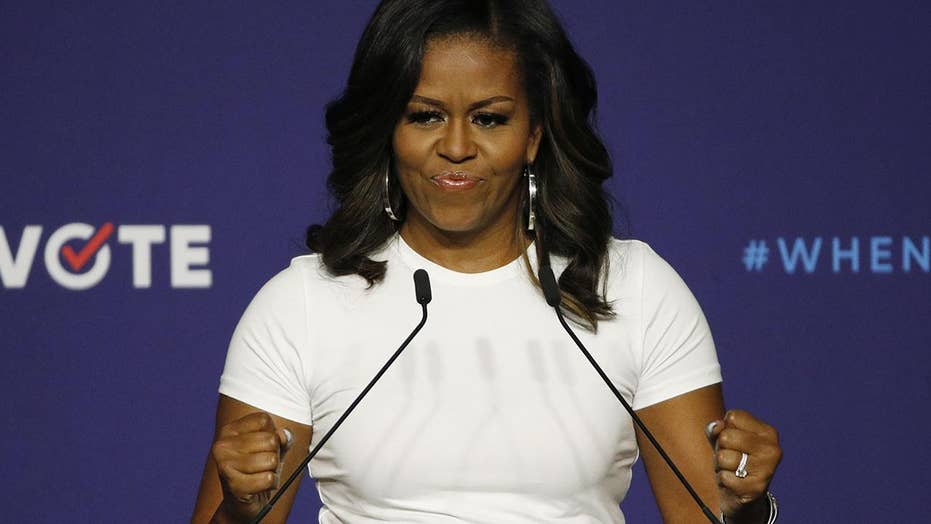 Liz Peek: Worried Democrats looking to Michelle Obama to run in 2020 - but why would she?

Earlier this year, left-wing filmmaker Michael Moore begged Michelle Obama to run for president in 2020; apparently, he is not alone.

Washington insiders report that Democratic Party officials are also urging the former first lady to enter the race. They see Joe Biden’s campaign in free-fall, with polling and donations dropping, and they are panicked that Massachusetts Senator Elizabeth Warren grows more inevitable by the day. Warren, they think, is way too liberal to win a national election. (They are correct.)

MICHELLE OBAMA SAYS THERE'S 'ZERO CHANCE' SHE'LL RUN FOR PRESIDENT: 'IT'S JUST NOT FOR ME'

It must be tempting for DNC apparatchiks to look for a new Super Candidate. Notwithstanding the unprecedented number of 2020 contenders, the herd has thinned; the leaders today are no lock to beat President Trump.

Former Vice President Joe Biden is struggling. His money-raise in the third quarter was a pitiful $15 million, nearly $10 million behind Elizabeth Warren. In the RealClearPolitics average of polls, Biden’s line trends downward like a stock you don’t want to own.  https://www.realclearpolitics.com/epolls/2020/president/sc/south_carolina_democratic_presidential_primary-6824.html

Joe’s problems mounted (as I predicted) when Democrats jumped into full-impeachment mode. Their focus on Trump’s push to investigate Biden for corruption in Ukraine of course also brought scrutiny to his son Hunter’s lucrative job with Burisma, a local gas company.

That the younger Biden was paid $50,000 per month by a company whose founder had been under investigation for tax evasion and money laundering and that he won that post when his father was the Obama administration’s point person in Ukraine raises reasonable questions. There may have been no wrongdoing, but the episode is an unpleasant reminder that Biden has been a swamp dweller for decades, and swamp mud tends to cling.

Biden’s worst problem, however, is that he has not batted down Trump’s accusations more convincingly. In a recent front-page piece, the New York Times quotes Democrats who bemoan Biden’s response as tepid and worrisome; they see it as evidence he may not be up to the task of confronting Trump on the campaign trail.

David Plouffe, Obama’s former campaign manager, is reportedly “mystified” by Biden’s hesitance, saying the former vice president should “use this moment and become Trump’s opponent.” But, he has not.

Meanwhile, Warren barrels ahead, much to the dismay of moderate Democrats who admire her zeal but worry that with her far-left agenda she cannot win a national election. Warren’s appeal is strong among women, college-educated whites and young people, but she has yet to bring minority voters on board, and she also trails with whites without a college degree. She recently rolled out a lengthy pro-union program aimed at attracting blue-collar workers, but her embrace of “Medicare-for-all” and the Green New Deal has to date not won over that important Democrat cohort.

Hence, the search for a miracle outsider. But would Michelle Obama want to run? And, would she win?

The Obamas are enjoying life in the post-presidential fast lane, frolicking with billionaires and celebrities like Bruce Springsteen, Oprah, David Geffen and Richard Branson, celebrating their new-found freedom on yachts in Tahiti and elsewhere.

They are also celebrating their new-found wealth. Each has reportedly signed book deals worth $60 million, and signed a “high ten-figure” contract to help Netflix produce films. They recently plunked down $15 million for a beachfront home in Martha’s Vineyard; their net worth has been estimated https://www.businessinsider.com/barack-obama-michelle-obama-net-worth-2018-7 to be between at $40 million and $135 million.

Would Michelle give that up?  She says no; she has twice declared publicly she would not run. She must know that campaigning against Trump would be ugly, no matter her credentials or popularity.

Past controversies will dog her, like this remark in 2008: “For the first time in my adult life, I am really proud of my country…” Critics will again scrutinize her Princeton thesis; her kids will once more be thrust on the national stage. Running for president is a dirty business.

But there’s a bigger problem awaiting any last-minute entrant into the 2020 race. Bernie Sanders’ supporters are already angry, convinced they were cheated out of victory by the DNC in 2016.

Hillary Clinton blames Bernie (along with scads of other villains) for her 2016 loss, saying he did not campaign hard enough on her behalf. As a result, she claims, some offended Sanders supporters simply stayed home.

The same will be true in 2020 should the party try an end-run – only this time it will be both Sanders’ army and Warren’s fans who will be furious. Combined, those progressives are attracting 41 percent of Democratic primary voters. That large group will be loath to give up their crusade. Sure, Michelle is popular, but will she adopt their favored policies like the Green New Deal or open borders?

Also, it has been clear in recent months that President Obama’s star has faded.  Numerous Democrat candidates have been quick to blast his TPP trade deal and even his signature Affordable Care Act, clearly convinced the Obama imprimatur no longer carries much weight with voters. As much as Biden clings to his relationship with the former president, the less it seems to matter.

Maybe that’s because Democrats now concede that the former president demolished their party; under his leadership, Democrats lost 18 governorships and 816 state legislative seats, 12 seats in the U.S. Senate seats and 64 in the House. Obama left the party politically and financially bankrupt.

Because of those Obama-era losses, President Trump has been able to enact tax and regulation reforms, and appoint hundreds of judges and two Associate Justices of the Supreme Court. Do Democrats really want to travel down that road again?