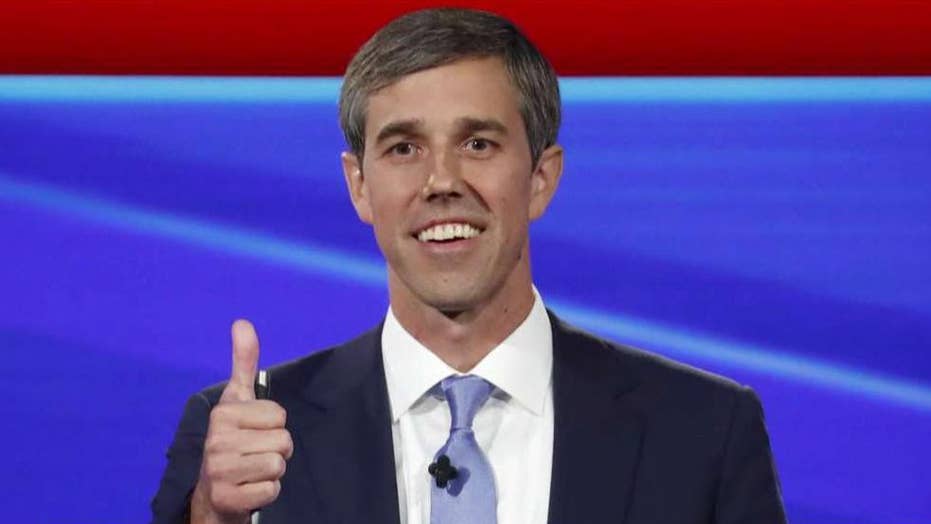 Former Texas congressman and failed Senate candidate Robert Francis “Beto” O’Rourke finally acknowledged the obvious Friday when he threw in the towel on his struggling campaign for the Democratic presidential nomination that never really got off the ground.

Attention immediately turned to what’s next for the one-time phenom, who has no cushy day job to fall back on. But bowing to reality, an O'Rourke spokesperson told Fox News that O’Rourke has ruled out running for the Senate next year against Sen. John Cornyn, R-Texas.

While O’Rourke’s stock is at rock bottom right now, it was only a year ago he was smashing fundraising records with his $80 million haul in his failed Senate campaign against Sen. Ted Cruz, R-Texas.

Political prognosticators speculate about whether Texas – a GOP stronghold for the last generation – will turn blue. If that happens, it would give whoever Democrats nominate for president a major boost because Texas has 38 electoral votes – more than any other state except California.

A shift of Texas from red to blue would also have a major impact in determining which political party has majority control in the U.S. House and Senate.

The argument about the Lone Star State’s changing political winds goes like this: In 2016, Donald Trump carried the state by a smaller margin than recent Republican presidential candidates. In 2018, Cruz barely eked out a re-election win over O’Rourke. And Democrats knocked off entrenched GOP incumbents in the growing Dallas and Houston suburbs.

This year, half a dozen Republican House members have opted not to seek reelection rather than face voters in a deteriorating political climate. The retirements have been so numerous that people refer to them as the Texodus.

To be sure, Republicans are wise to keep an eye on Texas. The changing demographics are indisputable.

But one thing is certain – the next Democrat to win statewide in Texas will not be O’Rourke. Assuming he sticks with plans to not challenge Cornyn, O’Rourke has apparently accepted the fact that his far-left presidential platform has slammed the door shut on his future political prospects in his home state.

This year O’Rourke parlayed his national profile toward the White House, ignoring those who would have rather seen him take on Sen. Cornyn, a genial and well-liked Republican.

O’Rourke spent much of his presidential campaign apologizing – including for his braggadocio about being “born to be in” the presidential race, for his “white privilege” and for other things.

Along the way, as he moved further and further to the left, O’Rourke championed radical Democratic policies like the Green New Deal and “Medicare-for-all.”

After tragedy struck his hometown of El Paso with a mass shooting Aug. 3, O’Rourke became more outspoken on the issue of gun control.

Taking a position that is very unpopular in Texas, where support for gun rights under the Second Amendment is strong, O’Rourke said he favored confiscation of what are commonly (but incorrectly) known as “assault weapons.”

"Hell yes, we are going to take your AR-15," O’Rourke said in the September presidential debate.

The statement marked a dramatic reversal of O’Rourke’s pledge during his Senate run, when he said that “if you purchased that AR-15, if you own it, keep it, continue to use it responsibly.”

With his headline-grabbing debate statement favoring confiscation of firearms, O’Rourke confirmed what Republicans have long accused Democrats of wanting to do.

Sen. Chris Coons, D-Del., predicted the moment “will be played for years” by Second Amendment advocates and hurt the cause of those seeking less drastic gun controls – a sentiment echoed by South Bend., Ind. Mayor Pete Buttigieg, another Democratic presidential candidate.

A Houston Chronicle editorial over the summer begged O’Rourke to “come home” and take on Cornyn. But O’Rourke’s radical positions on gun confiscation and other issues that he staked out in his failed presidential bid have ensured he will not be able to win any statewide political race in Texas.

There may yet be a day that Texas becomes more competitive, but it won’t be as soon as the left would like you to believe. And moderate Democrats will have a better chance of election than those on the far-left fringe like O’Rourke.

Come next November, Abbott’s name will be on the top of the ticket again as he seeks re-election. He is likely to win his race.

O’Rourke will be off the ballot and – as losers like to say – he will be able to spend more time with his family.