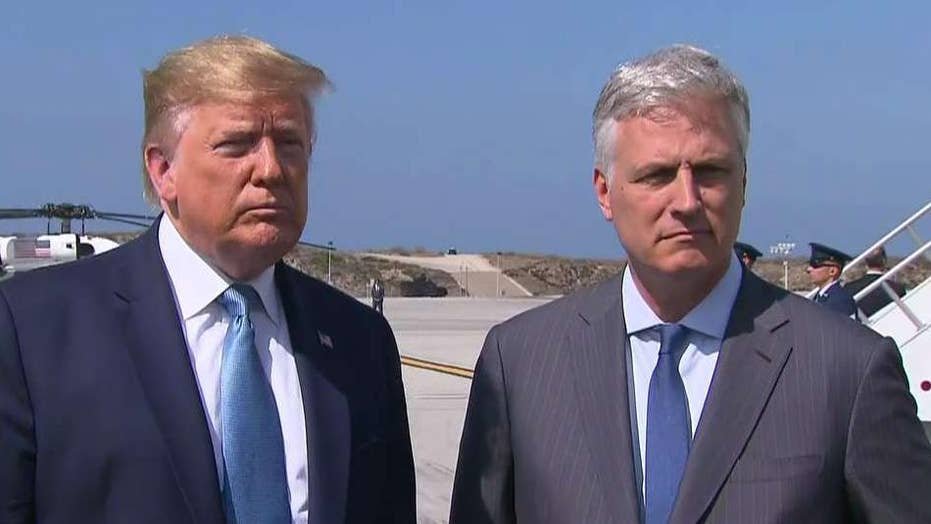 President Trump’s appointment of Robert O’Brien as national security adviser Wednesday is good news for Americans who believe in peace through strength. It’s bad news for America’s foes — and for those who hope the Trump presidency will fail.

At first glance, O’Brien’s appointment looks unusual. He is not an admiral or general, nor has he climbed the typical civilian rungs of the national security ladder. He doesn’t have a foreign policy degree from the Harvard Kennedy School or the Georgetown School of Foreign Service. While he has a distinct approach to our national interests, he is not instantly recognized as a member of any particular policy faction.

But such an assessment would miss O'Brien’s acumen for grasping what matters about foreign developments, and what Trump likely wants and needs for the role of national security adviser.

Unlike many of the legions of Washingtonians who hold office for the sake of holding office, O’Brien has a record of accomplishment, including serving with distinction as the U.S. special presidential envoy for hostage affairs. He helped bring home more than a dozen hostages and detainees since he was appointed earlier in the Trump administration, fulfilling a key facet of Trump’s "America First” foreign policy.

The job involved not only diplomacy, but close coordination of activity between the State Department and our intelligence bureaucracies as well as the military — skills that will come in handy for O’Brien’s new job.

O’Brien was most recently in the news for helping bring home the American celebrity rapper A$AP Rocky from Sweden, where the rapper was held on trumped-up charges after being targeted and harassed by Afghan asylum seekers.

O’Brien’s involvement led to snickers among the foreign policy elite, but O’Brien, like Trump, understood that Washington could not look the other way while a supposedly friendly European government blamed a prominent American victim of a crime rather than the perpetrators of the crime.

O’Brien also was a major in the Army’s Judge Advocate General Corps, and was one of the most successful litigators in California. He attended UCLA and obtained a law degree from the University of California at Berkeley. The fact that he did so and remained a conservative who believes that a strong America is good for the world is a testament to his character.

It's better to have someone who has been through the left-wing crucible and stayed true to course than someone who is untested and looking to become popular among the Washington elite.

O’Brien also backed Trump for president when other denizens of the Republican foreign policy elite opportunistically vowed to support Hillary Clinton, despite her disastrous track record on foreign affairs.

O’Brien also advocated “peace through strength” and getting tough with China before those positions were popular. O’Brien’s book, "While America Slept," is a compilation of his criticisms of the Obama-era hollowing out of the U.S. military and weakness in dealing with Iran and China. The book foreshadowed some of the arguments Trump used during his campaign and while in office.

Perhaps more important than his positions is the way O’Brien is likely to run the National Security Council. The job is often done best not by creatures of the military establishment — like now-retired Army Lt. Gen. H.R. McMaster, who held the job earlier in the Trump administration — or by gunslingers like John Bolton.

The job is done best by those who offer private counsel to the president, arbitrate fairly in the unruly national security bureaucracy, and privately press that bureaucracy to execute the president’s vision.

In that sense, O’Brien’s role as an affable but determined litigator and negotiator should serve Trump well. Trump has reversed disastrous Bush-Obama policies on trade, appeasing China and Iran, ignoring Islamists, underfunding the military, sideshow wars, and pretending natural climate change is a national security issue.

The job now is managing the implementation of Trump’s tougher alternatives to those policies during the time it will take a new, safer world to emerge.

We are in the equivalent of the mid-1980s gap between when President Reagan began that era’s version of peace through strength and the later, resulting collapse of the Soviet empire. Our turbulent transition may resemble that one at times, especially as a new world emerges with alliances and power dynamics that will be very different than the status quo so far in this century.

By appointing O'Brien, Trump has demonstrated confidence in his own vision, and his grasp of how he wants to run the White House and the larger national security apparatus. Trump is doubling down on his own winning strategy.