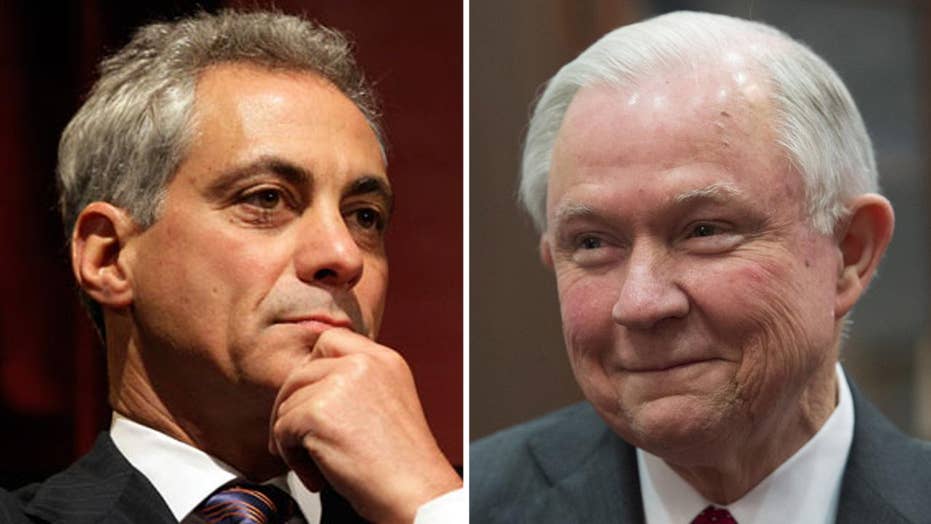 Kelly Wright has the details

The song Chicago, made famous by Old Blue Eyes himself, Frank Sinatra, refers to Chicago as a “toddlin’ town.”  Sadly today, thanks to decades of dreadful leadership, Chicago more resembles a “tottering” town, as in a place nearing collapse.

Let me preface my indictment of Chicago and particularly Mayor Rahm Emanuel with the important disclaimer that I love this city and I’ve raised a family here for two decades.  If cut, I would bleed the orange and navy of the Monsters of the Midway, my beloved Chicago Bears.

But no amount of hometown affinity can color the reality of a city in systemic decline. The U.S. Census Bureau reports that from 2015 to 2016, Cook County – where Chicago is located – lost more people than any county in America.  A U-Haul rental from Chicago to Texas can cost as much as six times more than the return trip, an indicator of the heavy outward flow of people.  It’s no wonder people vote with their feet and escape the endemic corruption, escalating taxes, and rampant crime. As I’ve argued repeatedly on Fox News, Chicago is certainly the most dangerous place in the developed world, with over 2,200 shootings already this year.

So what is Mayor Emanuel doing to address this migration out of our city?  How is he ameliorating the mammoth $838 million property tax increase that’s crushing disposable incomes in our city?  Is he searching for solutions for the most under-funded pension system in America, obligations that will cripple our budget in just a few years?  Is Rahm empowering police to stem the bloody carnage that afflicts the streets, especially in predominantly black neighborhoods?

Chicago, like other blue cities, has pursued a so-called “sanctuary city” policy, whereby police are forbidden from alerting federal authorities when they arrest someone for a crime and that perpetrator is also in the United States without permission.

No.  Instead, Mayor Emanuel is wasting time and focus and resources on suing the Department of Justice for daring to enforce federal law.  Chicago, like other blue cities, has pursued a so-called “sanctuary city” policy, whereby police are forbidden from alerting federal authorities when they arrest someone for a crime and that perpetrator is also in the United States without permission.  I prefer the term “Renegade Cities” because such politically correct nonsense hardly provides “sanctuary” to the victims and cops forced to deal with criminal aliens who are allowed to hide in plain sight.

The real world ramifications of such willful disregard for federal protections can prove horrible, as evidenced just last week in Portland, Oregon, where local police ignored an ICE deportation order for a 20-times deported illegal immigrant, who was then released and committed a brutal sexual assault on a 65-year-old woman sleeping in her own home.

Chicago is a tottering town – a fiscal and public safety implosion.  Mayor Emanuel would do well to address our very real and imminent problems rather than posturing for liberal elites and trying to turn the Justice Department and federal law enforcement into the bad guys.