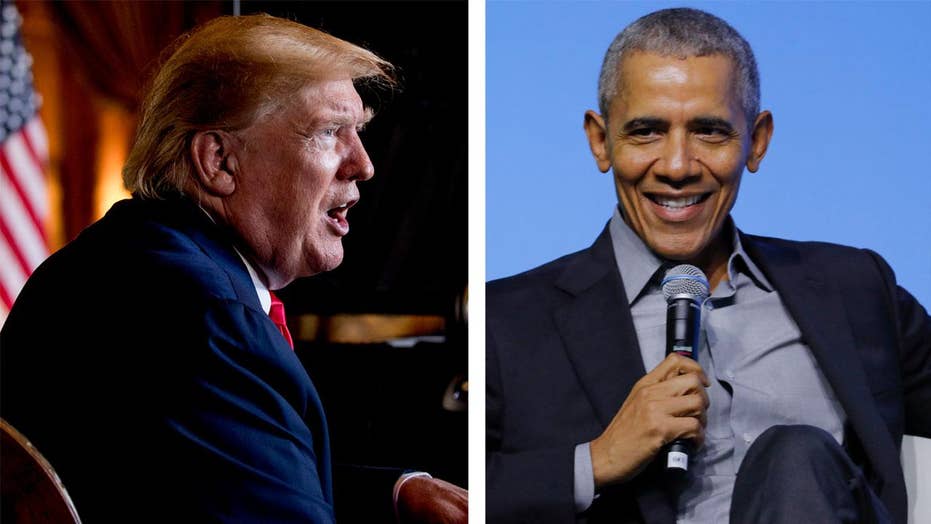 It's the first time at the top of the Gallup poll for Trump and Obama's 12th time.

His every move is monitored and documented by the media. Audiences follow the most popular and famous man in the world 24/7. He’s the ultimate reality star.

You probably think I’m referring to President Trump. I am – and I’m not.

THE MOST MEMORABLE POLITICAL GAFFES OF 2019

In the film, Truman is adopted by a corporation as a baby and raised in a giant TV studio made to look like a seaside town, with 5,000 cameras capturing his every move for a round-the-clock reality show.

Everyone in the town is an actor or actress hired to play a part. Only Truman doesn’t know he’s living in a simulated reality show. His entire life is documented by a manipulative producer showcasing his every move to capture TV ratings.

“The Trump Show” also has secrets, a cast of diverse characters and drama. Lots of drama.

A major difference between these two shows is that one was fictional with an unwilling protagonist who had no idea the world was watching him; the other is real with a star who desperately craves the world’s attention around the clock.

Another key difference is that Truman didn’t tweet, since Twitter wasn’t launched until 2006. Trump has tweeted more than 47,000 times since 2010 and now has over 68 million followers. Between tweeting, playing golf and making “perfect” phone calls with foreign leaders in which “there was no quid pro quo” it’s a wonder he finds time to eat and sleep.

January 2019 began as the year ended: with a battle between Trump and his longtime adversary, House Speaker Nancy Pelosi, D-Calif. If you’re a Republican, you probably believe Trump is Superman and the hero of this battle of the pols. If you’re a Democrat, you probably see Pelosi as Wonder Woman battling a dastardly villain.

With the many events that occurred in the last 12 months, it’s hard to believe that we had the longest government shutdown in history at the beginning of the year, spanning 35 days.

The shutdown was about Trump’s desire to build a wall along our border with Mexico, using taxpayer dollars (from American taxpayers, not Mexican ones as he claimed dozens of times when he ran for president).

I think Trump wanted to show the Chinese he could build a big beautiful wall even greater than their old decrepit one. Will our great wall be lined with Trump golf courses, resorts and towers?

While the government shutdown was in progress, Pelosi made history by not allowing Trump to give his State of the Union address in the House chamber. She’s no dummy. She knows denying Trump the chance to appear before a big TV audience is the worst punishment you can possibly inflict on him. Who knows, if she let him give the speech before the government reopened the shutdown might still be going on.

Then came the resignations and firings. I can’t remember who left when without getting dizzy, but over the course of the Trump presidency the departures have included: Secretary of Defense James Mattis, Secretary of State Rex Tillerson, White House Chiefs of Staff Reince Preibus and John Kelly, White House Communications Director Anthony Scaramucci, Press Secretaries Sean Spicer and Sarah Sanders, U.N. Ambassador Nikki Haley, FBI Director James Comey, Attorney General Jeff Sessions … oh, forget it, there are too many to name over three years. I should have started listing those who didn’t leave, to save space.

A big focus of “The Trump Show” was immigration. The president – who married two immigrants (but not at the same time), had an immigrant mother and immigrant grandparents – tried to make us believe our country has no more room for new arrivals and wanted us to be terrified of dangerous criminals invading our homeland.

We saw images of children in cages, and Trump still demanding funds for a wall – which he finally took from other parts of the federal budget. We still don’t have comprehensive immigration reform, but we had to move on.

Trump tweeted, and this time it was about an evil witch hunter: former FBI Director and Special Counsel Robert Mueller.

In March, the long-awaited summary of the Mueller Report came out. Remember? Me neither. It was supposed to lead to many investigations, arrests, and proof of Trump-Russia collusion. Attorney General William Barr gave a summary of a summary, and a 400-plus page report was released. Mueller testified before Congress and America fell asleep.

A few investigations were launched by Pelosi, Senate Minority Leader Chuck Schumer, D-N.Y., and the House; some arrests were made and some people were convicted of crimes and then we moved on.

“The Trump Show,” if you haven’t noticed by now, is an action-packed thriller with a rapidly changing cast.

By summer, Trump became the first sitting U.S. president to step into North Korea and met with dictator Kim Jong Un. According to a Trump tweet, his visit with “Rocket Man” – as Trump affectionately once called Kim – was “amazing.”

At one point, Trump even said he and Kim “fell in love.” But now Trump’s newest love interest is threatening to resume testing missiles and maybe even nuclear weapons. Ah well, love doesn’t always last.

Then Trump started a trade war with China, Mexico and Canada, and started criticizing our NATO allies. But thankfully, he kept up good relations with his best buddy, Russian President Vladimir Putin.

In other news … Trump, tried to buy Greenland, I think. He could’ve changed its name to Trumpland, put up some golf courses and resorts and casinos, and made it a world-class tourist mecca like the world has never seen. It would’ve been something really special. But those silly Danes refused to sell.

The leader of the free world visited with the great Kanye West, went to Mar-a-Lago over and over again at the cost of millions of dollars to taxpayers (U.S. taxpayers, not Mexican ones) and held rallies before adoring crowds. Ah yes, the rallies. The end of 2019 has led us to the end of “The Trump Show” for the year as we head into a new season of a spinoff: “The Candidate.”

Oh wait, I almost forgot. We have the battle of impeachment. According to the president, this is another witch hunt led by unhinged Democrats and he’s done nothing wrong. House Democrats didn’t buy that plotline and voted to impeach him.

But never fear for the hero of our reality show. Trump Chief Defense Attorney Mitch McConnell, R-Ky. – who also holds a second job as Senate majority leader – has guaranteed that the Senate will acquit Trump in a trial, no matter what. Evidence, schmevidence. Witnesses? Who needs them? McConnell knows Trump can do no wrong. After all, the president himself told us that “I am the chosen one.”

“The Trump Show” has had so many plot twists, characters and settings that I know I’ve left out quite a lot.

What lies ahead? The biggest cliffhanger of all time. What is Nancy Pelosi going to do with those articles of impeachment adopted by the House? Remember what they are? Me neither!

And the plot thickens on the most popular reality show and soap opera in history … far, far more interesting than “The Truman Show” ever was.