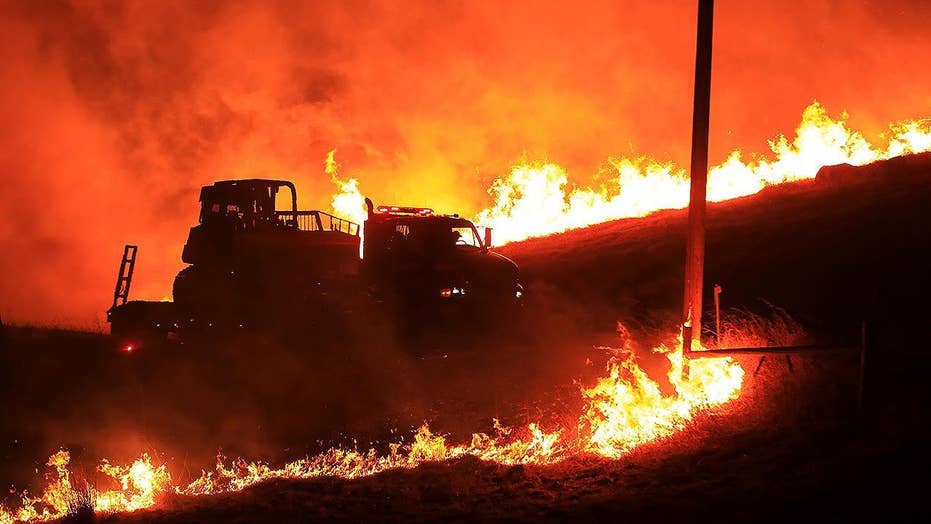 Geyserville, California under evacuation as wildfire burns out of control

A wildfire in Sonoma County, California has tripled in size from strong winds and dry conditions; Claudia Cowan reports from the scene.

It’s fall in California and with it comes changing weather and winds. For millions of Californians, it also heralds a stark new reality: no electrical power to go with seasonal fires. This is the reality of California in 2019 and, also, what I have called the “failed social justice state.”

We all know California is called the Golden State. For decades upon decades, to many around the world, it was a land of great beauty and opportunity. "Go West" meant reaching its beautiful shores or pursuing a fortune from its bountiful resources and people.

Now the streets of its major cities feature the homeless, litter and used drug needles to go along with high taxes and uncertain water supplies.

Millions of people have left California for opportunity in other states along with countless businesses. Meanwhile, California and its cities arrogantly pass laws refusing to do business with other states that fail to live up to the liberal social justice ideals of California politicians.

All of which brings us to PG&E - the financially and legally bankrupt gas and electric provider for most of California. Founded in 1905, PG&E rose to unprecedented heights for a utility providing service to over 16 million people - or  over three million more than the total population of Pennsylvania let alone the 45 other states smaller than Pennsylvania.

Friday, for the second time in a month, PG&E preemptively turned off the power to customers around the state causing economic damage in the untold billions. The first time PG&E did this, earlier this month, Morgan Hill, an affluent San Francisco suburb, had a curfew that was imposed to deter crimes during the power outage. 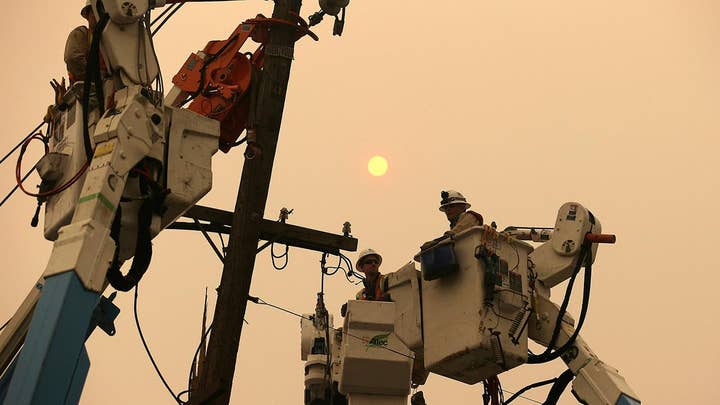 Among other consequences, massive power outages across California pose a life-threatening risk to people dependent on electric-powered medical devices. This has led to at least one reported death and has also caused widespread food spoilage in stores.

All in all, PG&E’s drastic measures have resulted in billions lost – just in October alone.

If you don’t live in California you may think this is all irrelevant – but you’d be wrong.

Democrats seeking their party’s 2020 presidential nomination have already embraced some of the same Big Government and radical environmental policies that have brought blackouts to California – and could bring power outages and shortages to our entire nation should one of them become the next president. 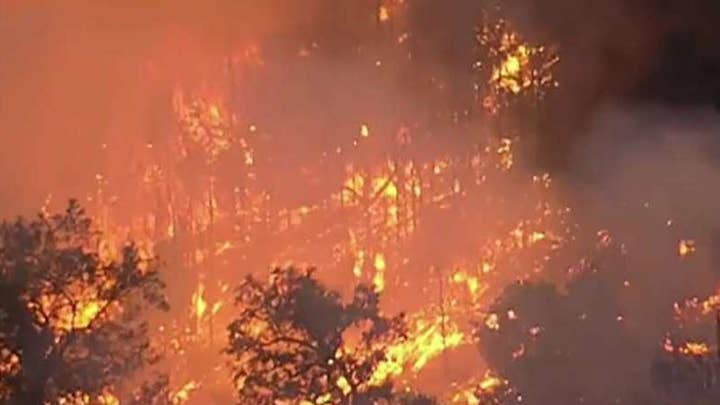 Meanwhile, a federal bailout of PG&E and California might also be blowing in the wind.

Some history from this wacky state that is the darling of the green left is in order.

First, keep in mind that PG&E is a public utility, meaning it is a highly regulated monopoly and has to get government approval for its yearly budget and activities. It is regulated by the California Public Utilities Commission, a virtually unaccountable government agency.

As a monopoly, PG&E has no real incentive to please customers. Tens of millions of people have no choice but to get their electricity from PG&E and the regulators guarantee PG&E a rate of return. Absent market forces, PG&E is predictably poorly run.

Two decades ago, PG&E changed its business model and brought in a banker to run its business, change its operations and now, we know, its fortunes.

As a monopoly, PG&E has no real incentive to please customers. Tens of millions of people have no choice but to get their electricity from PG&E and the regulators guarantee PG&E a rate of return. Absent market forces, PG&E is predictably poorly run.

Shareholder return was emphasized and routine maintenance was deemphasized. Rather than diligence, a “Just in Time” maintenance regime was put in place resulting in deferred maintenance.

So much was deferred that PG&E recently had to hire an outside firm to conduct an audit of power lines and facilities to determine the true state of its affairs – a clear admission of its failed policies and lack of confidence in its electrical grid.

Second, for decades environmentalist groups have successfully fought the thinning of forests and other wooded areas in the name of saving animal species. The result has been to create tinderboxes around the state.

Third, always remember that the state of California gets almost no rain from April to November – year after year. By itself, these conditions create a “fire season” each fall at the same time that Mother Nature picks up her winds.

The final piece in this puzzle is that California is one of only two states in the country (Montana is the other) with something called inverse condemnation for utility companies. That law, “exposes California utilities to liabilities from wildfires regardless of their negligence, as long as their equipment is involved.”

All of those factors combined have resulted in recent fires that have saddled PG&E with over $30 billion dollars in potential liabilities. At this writing, a new fire, potentially started by the negligence of PG&E, could make that figure jump up again. In plain truth, there is simply no way for its ratepayers to make up those losses.

The worst wildfire caused by this bad forest management was the Camp Fire in Northern California in November 2018, which claimed 85 lives – making it the deadliest wildfire in California history and deadliest in the U.S. since 1918.

The Camp Fire destroyed almost 14,000 homes, more than 500 businesses and nearly 4,300 other buildings as it raged for over two weeks.

So, who is at fault for this deadly mess?

Well, following the Camp Fire, California legislators saw the deadly error of their ways and eased forest management rules to allow for the necessary thinning of forests.

For years PG&E tried to have it otherwise. Over the last decade, PG&E has spent over $78 million of ratepayer money lobbying Democrats who control the California legislature.
All was fine for PG&E with the Democrats until a natural gas pipeline operated by the utility in San Bruno, south of San Francisco, exploded in 2010 and killed eight people and destroyed a neighborhood. That was followed by the more recent wildfires.

The Democrats abandoned PG&E and rejected the utility’s request for a taxpayer bailout. Faced with astronomical bills, PG&E declared bankruptcy for the second time this century.

Without legislative help, PG&E has now preemptively been forced to shut off power to minimize its risk for paying for future disasters when seasonal winds and dryness come calling.

Ratepayers and industry insiders will tell you it was a big power play by PG&E to force legal changes by holding ratepayers hostage.

Not long ago, PG&E announced that there could be rolling blackouts for a decade to come.

In the one-party state that is California, it is a safe bet that the Sacramento Democrats won't do much given the state's existing problems which include trillions in public employee pension debt and infrastructure debt.

So, Californians can expect more wildfires, more power outages, and higher electric bills for at least a decade.

When all of that fails, the state will undoubtedly turn to the federal government to bail out its functionally bankrupt utility.

Looking farther into the future, California Democratic Gov. Gavin Newsom is expected to run for president in 2024 or later. Should he ever move into the Oval Office, expect him to do his best to bring the craziness of California’s far-left policy disasters to our entire nation.