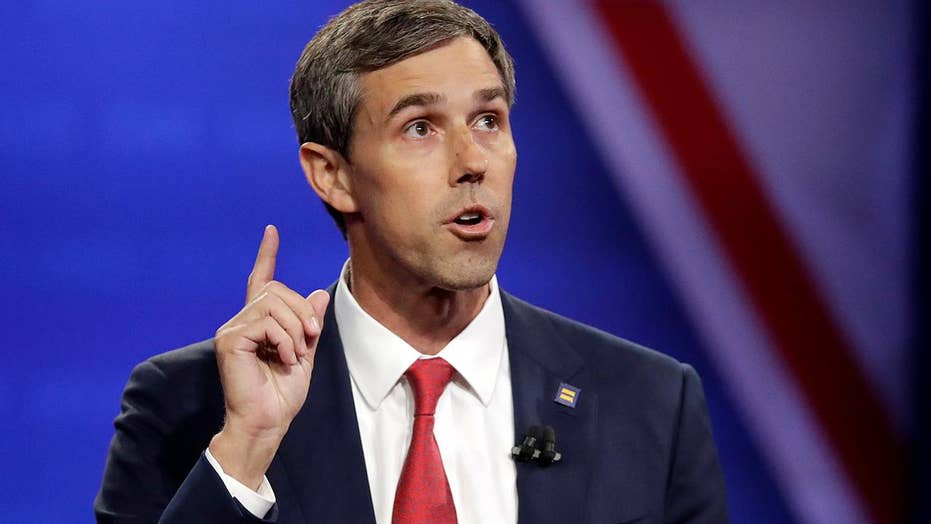 Robin Biro and Gianno Caldwell debate the impact of Beto O'Rourke's call for the removal of tax-exempt status for churches who don't support same-sex marriage on the 2020 election cycle.

Democratic presidential candidates have spent the last few months introducing a rucksack of new policy proposals, some of which, if implemented, would be incredibly harmful.

One of those proposals came from former Texas Congressman Beto O’Rourke, who argued that religious institutions must be stripped of their tax-exempt status if they oppose same-sex marriage.

This is, sadly, not the first time that people of faith have been alerted to the punishment that some on the political Left wish to mete out to dissenters.

In a statement attached to the document “Peaceful Coexistence,” Martin Castro, chairman of the U.S. Commission on Civil Rights, argued that religious believers use phrases such as religious liberty as “code words for discrimination, intolerance, racism, sexism, homophobia, Islamophobia [and] Christian supremacy.”

The message from O’Rourke and Castro is clear, and it is shared by many Democratic progressives: Religious liberty has got to go.

The underlying assumption here is that a Christian’s disagreement about marriage or sexuality necessarily represents hatred, fear or bigotry. Sadly, too many religious people have expressed hatred toward LGBT people, giving credence to this assumption. We Christians must oppose this bigotry wherever we find it.

The result of a genuinely Christian view of marriage and sexuality, however, is not bigotry, but wholeness. And Christianity disallows any type of hatred or disrespect.

O’Rourke and Castro seem uninterested in this distinction. And if their ilk win the day, Christians will be punished for their beliefs.

Supreme Court Justice Samuel Alito saw this coming. In his dissenting opinion to Obergefell v. Hodges, he wrote, “I assume that those who cling to old beliefs will be able to whisper their thoughts in the recesses of their homes, but if they repeat those views in public, they will risk being labeled as bigots and treated as such by governments, employers, and schools.”

What is wrong with progressive proposals such as O’Rourke’s? At least four things.

First, they violate the First Amendment and the many court opinions which make clear that groups cannot be denied tax-exemption based upon their viewpoints.

The First Amendment to the U.S. Constitution declares, “Congress shall make no law respecting an establishment of religion, or prohibiting the free exercise thereof.” Significantly, the First Amendment does not confine religious liberty to privately held beliefs or semi-public worship services. The Constitution is clear: Religious freedom extends to public actions.

Second, proposals such as O’Rourke’s threaten not only religious freedom but other freedoms as well.

Religious liberty is called the “first freedom” because it gets to the heart of what it means to be human. It declares each person is free to hold his or her own convictions about ultimate reality, to align his or her life with those convictions, and to do so openly and without fear.

Third, O’Rourke’s view would create negative repercussions not only for churches, but also for other institutions.

For example, consider the implications for religiously conservative institutions of higher education. Many of these colleges and seminaries have confessional statements that conflict with the reigning progressive prejudices concerning, for example, sexual behavior or abortifacient contraceptives.

Were progressive restrictions on religious liberty take hold, the stripping of tax-exempt status would only be the start. Eventually, these institutions would be forced to forfeit their regional accreditation and will lose enormous amounts of additional revenue because of the “donor stigma” associated with giving to conservative causes.

Fourth, and most importantly, when religious liberty is restricted, the entire nation suffers.

O’Rourke thinks he is promoting a world in which he would like to live. He is not. He is, in fact, promoting one version of one religious worldview — the unique secular progressivism of 2019. He would like this worldview to have a hearing in the public square, while other competing worldviews are censured or silenced.

An attack on liberty always harms more than those who are immediately involved. For that reason, Americans on the Left and Right should reject any and every threat to religious liberty.

And we must support every American’s right to hold his or her own convictions about ultimate reality, to align his or her life with those convictions, and to do so openly and without fear.

Bruce Ashford is the Provost and Professor of Theology & Culture at Southeastern Baptist Theological Seminary. He co-authored the recently-released "One Nation Under God: A Christian Hope for American Politics" with Chris Pappalardo. Follow him on Twitter @BruceAshford.