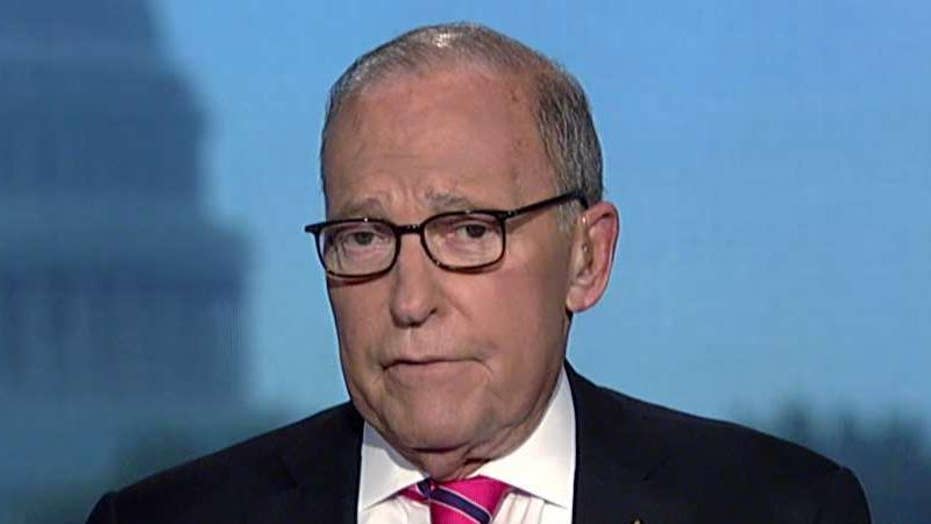 Larry Kudlow says he hopes that the work done by the U.S. during the United Nations General Assembly is not overshadowed by the Democrats' formal impeachment inquiry announcement and the whistleblower complaint.

Buried beneath the impeachment headlines this week was some good news for our economy: The U.S. and Japan have agreed to a trade deal that takes down barriers affecting U.S. farmers and digital commerce.

If this is followed by ratification of the United States-Mexico-Canada Agreement (USMCA) and a trade deal with China, the result would be a trifecta of historic trade agreements that would boost business confidence and send the economy soaring in 2020. It’s all within reach, even in the midst of an impeachment-obsessed D.C., but it’s going to require President Trump to go on offense with Congress.

It’s been a nearly a year since Trump and his counterparts in Canada and Mexico signed the USMCA, and yet Congress has stalled on ratifying the agreement. Democrats object that the deal doesn’t go far enough to raise labor standards and environmental protections. But failing to get the USMCA passed has been much more about politics than economics.

AMB. ROYA RAHMANI: ELECTIONS IN AFGHANISTAN ARE CRITICAL — THEY NEED US SUPPORT ON THE PATH TOWARD PEACE

Between the probe by Special Counsel Robert Mueller and now the Ukraine controversy, Democrats have found convenient excuses for inaction and distraction, pushing USMCA to the back burner.

But whatever political advantage Democrats think they’ve gotten from delay has come at the cost of American businesses and workers, who have been left to deal with the uncertainty of not knowing on what terms they can invest in growing their businesses and selling their products.

The American people are aware of that cost and have made it clear in polls taken before revelations of Trump’s call with the president of Ukraine that they don’t support impeachment efforts.

The USMCA isn’t a perfect deal — no trade agreement is — but it makes important updates on issues like intellectual property and provides clarity on rules and regulations so that businesses can once again think about long-term investment.

As Americans grow weary with probes, investigations and overblown political posturing in Washington, they’re looking for action on issues that affect their daily lives. Democrats have controlled the House for the better part of a year and don’t have much policy to show for it. It’s an ideal moment for Trump to refocus on the economy and relentlessly push Congress to do its job on the USMCA.

Trade deals with Japan and China, and a ratified USMCA, would provide a powerful confidence boost to workers, businesses and investors heading into 2020.

The best way for the president to turn up the heat on Congress would be to get results with China. He’s hinted that a trade agreement could happen “sooner than you think.” That would be welcome news for U.S. businesses that have suffered from economy-stalling uncertainty caused by delays on the USMCA and escalating tariffs and tension with China.

A trade deal with China, on the heels of the latest one with Japan, would allow the president to credibly claim that he’s doing his job and that it’s time for Democrats in the House to do the same.

In the glaring spotlight that would turn back on Congress, thin political excuses for inaction would quickly evaporate, setting up the president to enter an election year with the wind of three economy-boosting trade deals at his back.

As talk of investigation and impeachment dominates headlines, the margin for meaningful action on pocketbook issues seems to be shrinking. But the truth is, growing frustration with Washington and its inability to focus on issues that affect voters’ lives is creating an opportunity for leadership.

The initiative and leverage lie with the president. A trade deal with Japan, followed closely by a new deal with China and a ratified USMCA before year-end, would provide a powerful confidence boost to workers, businesses and investors heading into 2020.

Democrats surely aren’t eager to give Trump that kind of economic momentum before the 2020 election. But if the president plays his cards right, they may not have a choice.