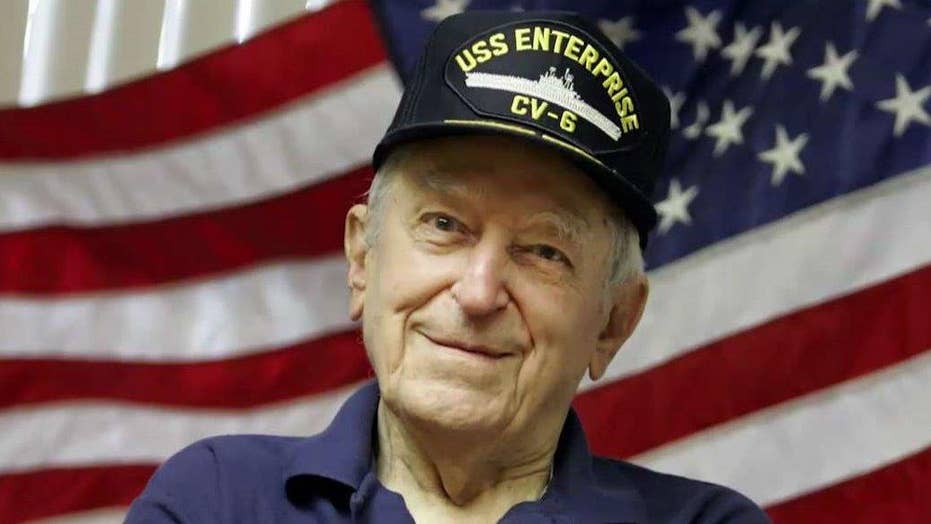 'Never Call Me a Hero' tells the story of 'Dusty' Kleiss's role in the Battle of Midway; Lucas Tomlinson shares the story on 'Special Report'

Seventy-five years ago this week, American pilot "Dusty" Kleiss began a near-vertical dive aimed the Japanese aircraft carrier Kaga, 20,000 feet below. Seconds later, the smoldering Kaga was crippled by Dusty’s perfectly-placed bomb; at that moment—almost six months after the tragedy of Pearl Harbor--the course of World War II began to change. Now, Kleiss has published his memoirs, Never Call Me a Hero, co-written with Timothy and Laura Orr, who reflect here on the Battle of Midway and their collaboration with one the battle’s decisive participants.

On June 4-7, 1942, two U.S. Navy task forces won an unexpected victory in the waters near Midway Atoll, sinking four Japanese aircraft carriers and turning the tide of the Pacific War. America’s aviators paid a high price for that victory. When the echoes of combat subsided, American forces counted up 189 missing aviators. Lieutenant (junior grade) Norman Jack Kleiss, a dive bomber pilot attached to USS Enterprise’s Scouting Squadron Six (VS-6), was one of the lucky few to survive. Known as “Dusty” to his friends, the twenty-six-year-old Kansas pilot had quite a story to tell. He had participated in every air operation launched by his carrier and he had helped sink two aircraft carriers and one cruiser. Dusty was one of the few Battle of Midway veterans to live into the twenty-first-century. Toward the end of his life, he felt the urge to tell his tale in full and leave behind his account for future generations.

For six months before the Battle of Midway, Dusty and his comrades trained relentlessly, preparing for the possibility of war with the Empire of Japan. When the Imperial Japanese Navy attacked Pearl Harbor on December 7, 1941, Dusty’s squadron was caught in the fray, losing four pilots and six gunners. For the next three months, USS Enterprise’s air group battled above tiny enemy-held islands: the Marshall Islands, Wake Island, and Marcus Island. These battles were filled with close calls, steep dives over enemy ships, hostile antiaircraft fire, and intimidating Japanese fighter planes.

Dusty’s greatest challenge came on the morning of June 4, 1942, when his squadron searched for Japanese carriers sailing northwest of Midway Atoll. After an exhaustive five-hour search, at 10:20 A.M., thirty-one dive bombers belonging to Scouting Six and its sister squadron, Bombing Six, dived on the Japanese carriers Kaga and Akagi. Dusty’s bomb was one of four to strike Kaga that morning, sending it to the bottom of the Pacific Ocean along with 811 of its crew.

On the afternoon of June 4, Dusty accompanied a force of 24 dive bomber crews on a mission to sink another enemy carrier, IJN Hiryu. At 5:00 P.M., Enterprise’s dive bomber pilots reprised their success, putting five bombs into this carrier. Dusty scored the second hit, which ultimately sent this, the fourth Japanese aircraft carrier in a single day, to the bottom. He flew on two more missions over the next two days, and on June 6, he made another direct hit, this time on the cruiser Mikuma. Dusty was the only American pilot during the Battle of Midway to score three direct hits.

The Battle of Midway was Dusty’s last battle. After his carrier returned to Pearl Harbor, the Navy sent him home to train dive bomber pilots. In November, the Secretary of the Navy awarded him the Navy Cross for his actions at Midway. Dusty spent another twenty years in the Navy, serving as a member of the Bureau of Aeronautics and a staff officer for the Atlantic Fleet before retiring as a captain in 1962. He lived a full century, leaving this world on April 22, 2016.

In his later years, Dusty often pondered his role in the Battle of Midway. He disliked being called a hero. In his opinion, he only did what he had trained to do, nothing more. However, he hoped that Americans would remember the service rendered by his squadron and the other dive bomber pilots who fought during those dark days in early 1942. Dusty often said his comrades—particularly those who died—delivered the crucial victory in the Navy’s hour of need: “Each one of them, I know, did their best. Some of them won medals, some of them were not really known at all. But each one of them did it for their country.”

When we first met Dusty years ago, he wasn’t sure he wanted to share his story with the world. But after much soul-searching, he agreed, saying he owed it to his friends—those who died in the war—to tell their story on their behalf. He insisted that he was no hero himself, but simply a regular person doing the tasks for which he had been trained.

We titled the book “Never Call Me a Hero” because Dusty wanted to be remembered as an ordinary man, even if he accomplished extraordinary things. He spent the final five years of his life working closely with us, editing chapters and adding stories, making his account personal and reflective. He focused not only on his time in battle, but also on the story of his love with Jean, his girlfriend, whom he married one month after Midway. He told us about the friends he lost, the mistakes he made, and the many successes for which he held enormous pride.

With Dusty’s book – and on this important historic milestone – we hope readers will remember the sacrifices made by him and the other daring carrier aviators who fought in the Pacific War and appreciate their amazing deeds.

Timothy Orr is an associate professor of military history at Old Dominion University in Norfolk, Virginia. He is author/editor of Last to Leave the Field and Cities at War.