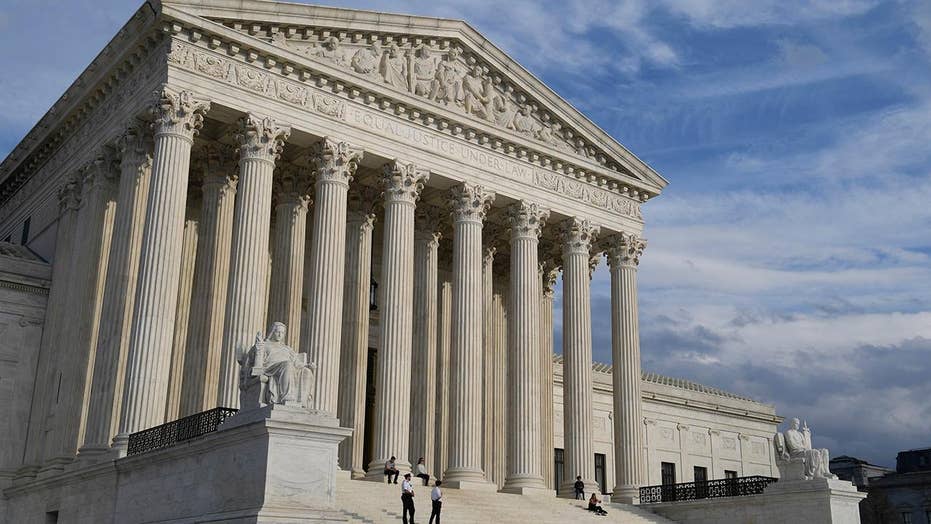 Why should the Supreme Court stay at 9 justices?

A history lesson on the number of justices found in the U.S. Supreme Court on 'Fox &amp; Friends First.'

Several Democrats seeking their party’s 2020 presidential nomination are calling for increasing the number of Supreme Court justices – set at nine under a law enacted in 1869 – to shift the court’s ideological balance leftward.

The scheme is worthy of President Franklin Delano Roosevelt, who attempted to pack the Supreme Court in 1937 with new justices who he believed would uphold the constitutionality of his New Deal policies.

Roosevelt suffered setbacks when the high court ruled that some New Deal legislation he had signed into law was unconstitutional, overturning the laws.

TRUMP FIRES BACK AT DEMS' COURT-PACKING PUSH: ‘IT WILL NEVER HAPPEN’

Since the Constitution does not set the number of Supreme Court justices, Roosevelt asked Congress to allow the president to appoint up to six additional justices – one new justice for each sitting justice over the age of 70.

FDR’s actions were widely criticized – even by members of his own party – and the idea ultimately died.

Now, however, leading Democratic presidential hopefuls – including former Rep. Beto O’Rourke of Texas and Sens. Elizabeth Warren of Massachusetts, Kirsten Gillibrand New York and Kamala Harris of California – are attempting to bring the court-packing proposal back to life.

These Democrats couch their support of court-packing as a means of “saving” the Supreme Court.

While we can speculate on the motives for each of these candidates’ stance on the issue, one is more obvious than the others. Harris, who has deep ties to public employee unions, wants to pack the Supreme Court bench to overturn a landmark case that threatens to topple the political power unions have held for decades.

Referring to court packing, Harris recently warned: “We are on the verge of a crisis of confidence in the Supreme Court. We have to take this challenge head on, and everything is on the table to do that.”

The list of cases that those on the left believe the Supreme Court has decided incorrectly – though not necessarily unconstitutionally, since their concern for the Constitution is roughly nil – is quite lengthy. Citizens United v. the Federal Election Commission, a case that protected free speech rights in the political system, would be in the crosshairs.

But even more pressing, from the point of view of those on the left, is the need to overturn the Janus v. AFSCME decision, in which the court ruled last summer that mandatory union dues or so-called “agency fees” were a violation of government employees’ First Amendment rights.

Almost before the ink was dry on the decision, government employees – with the help of organizations like the Freedom Foundation – began exercising their rights and leaving their unions, giving themselves more money in their paychecks.

On the West Coast alone, approximately 45,000 public employees have said farewell to their union.

Harris has long been an ally of labor unions in her home state of California.

Harris’s inner circle is intimately connected to the labor movement. In addition to taking hundreds of thousands of dollars from labor PACs during her relatively short political career, one of the senator’s top aides, Laphonza Butler, is the former president of the Service Employees International Union (SEIU).

Butler led California’s largest union for a decade, was the SEIU president when it endorsed Harris in her Senate bid, and now pulls her strings from the inside.

Butler said in a recent interview: “I had to choose how to best continue the work that I’ve been doing as an advocate for workers and a voice for workers – and working for Sen. Harris is a continuation of that.”

No doubt. How better to constantly remind Harris of her massive obligation to organized labor than by demanding a seat in her inner circle?

In fact, the investment is already paying dividends. Just this past weekend, Harris floated the idea of using federal funds to supplement the wages of unionized teachers who she characterized as underpaid.

There would certainly be many court cases that could be overturned or revisited if the left were able to seize control of the Supreme Court – but maybe none so quickly as the Janus ruling.

What unions want, the left gladly gives. And unions want nothing so much as to be rid of the decision in the Janus case.