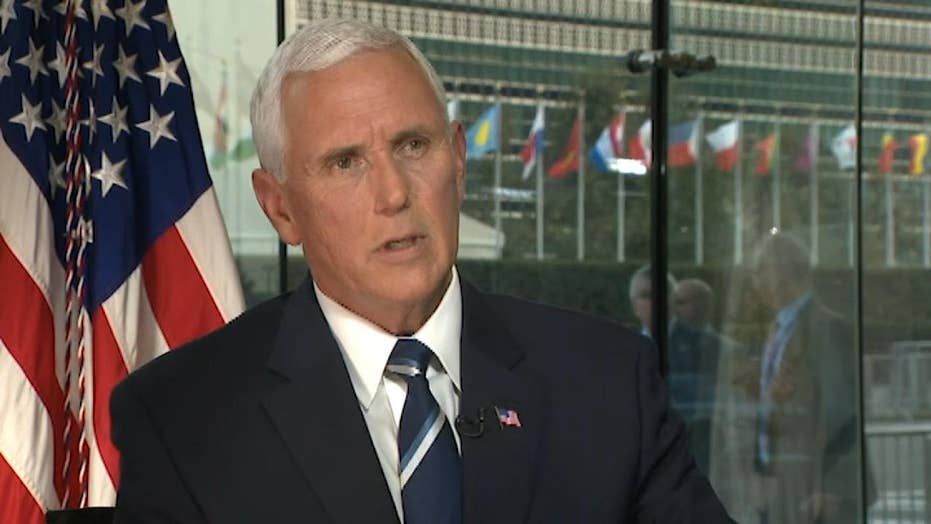 Pence on the Ukraine controversy and Joe Biden

Vice President Mike Pence sits down for an exclusive interview on 'Hannity.'

Editor’s Note: The following is an excerpt from Andrew C. McCarthy’s new bestselling book, "Ball of Collusion: The Plot to Rig and Election and Destroy a Presidency." The footnotes have been omitted.

It is in connection with Paul Manafort that we encounter some genuine collusion targeting the 2016 campaign: willful collaboration among foreign governments, the Obama administration, and the Clinton campaign.

Just a week after the campaign introduced Carter Page as a Trump foreign policy adviser, it announced that Manafort had been brought on board, too. The consultant was an old political hand, experienced managing the rough-and-tumble of a convention fight.

Manafort had longstanding, lucrative political consulting (and other business) arrangements with Ukrainian and Russian oligarchs who had Kremlin ties. These arrangements had already been spun into a narrative of political corruption in 2007 and 2008 by Glenn Simpson — then a Wall Street Journal scribe. In 2016, as the Fusion GPS impresario, Simpson would pull these articles off the shelf to help weave the Russia-gate tale.

In February 2014, the Ukrainian Euromaidan uprising finally forced the flight to Moscow of Manafort’s client, Ukrainian President Viktor Yanukovych. With American attention intensifying as tensions boiled over in Kiev, Manafort reentered the FBI’s investigative cross-hairs, as did other American political consultants who did work that benefitted the Party of Regions.

Yanukovych’s abdication delighted the Obama administration, which was quick to back the new administration of President Petro Poroshenko. Kiev became so dependent on Washington for desperately needed financial support that, by threatening to withhold funds, Vice President Joe Biden pressured Poroshenko into firing Viktor Shokin, one of his top prosecutors. Shokin just happened to be investigating a natural gas company called Burisma, which just happened to have placed Hunter Biden, the vice president’s son, on its board of directors.

While the Veep pushed the International Monetary Fund to grant Ukraine a $17.5 billion loan package, Burisma lavishly compensated Hunter’s law firm, to the tune of more than $3 million over an eighteen-month span. A lot of money? Sure, but it’s chump change compared to the Chinese government’s $1.5 billion infusion in a joint investment fund with Hunter Biden while Vice President Biden, administration point-man on China issue, turned a blind eye to Beijing’s aggression in the South China Sea.

Under the circumstances, it may seem ironic that the Obama administration prodded Ukraine to establish a National Anti-Corruption Bureau (NABU) — but the IMF, like most progressive institutions, is duly impressed by such Orwellian titles. Naturally, the fledgling NABU developed a close-knit relationship with the FBI.

In 2014, NABU alerted the bureau to a ledger said to have belonged to Yanukovych, bête noire of the new Ukrainian government. The ledger purports to show $12.7 million in cash payments to Manafort. The FBI used the information to interview Manafort, but the authenticity of the ledger has not been established. Manafort dismisses it as fake, contending that the Party of Regions paid him by wire transfer, not cash. Ukrainian officials have conceded that they cannot prove the payments reflected in the ledger were made. The case was thus reportedly closed with no charges. (Perhaps not coincidental to the Obama Justice Department’s decision not to pursue the case: Manafort had brought influential Democrats into his Ukrainian work, such as former Obama White House Counsel Greg Craig and the consulting firm started by Obama and Clinton adviser John Podesta — a firm that is still run by Podesta’s brother.)

But then came 2016, and sudden renewed interest in the Manafort- Ukraine investigation … just as the U.S. presidential campaign kicked into high gear.

Contrary to the media-Democrat collusion narrative, Manafort had pleaded with Yanukovych to chart Ukraine’s course toward the EU rather than Russia. It was the Ukrainian president’s rejection of this advice that sparked the protests and his flight to Moscow. Afterwards, Manafort busied himself by propping up a new Ukrainian political organization, the Opposition Bloc, to supplant the Party of Regions.

That put Manafort on the radar screen of Alexandra Chalupa, a Ukrainian-American and a DNC consultant who was all in for Hillary. Chalupa is said to have had an inkling that Manafort would become involved in the Trump campaign. Why she did is an interesting and thus far unanswered question.

To be sure, if it was conjecture, it would have been sensible conjecture: a Ukrainian keeping tabs on Manafort would know he was a friend and former political consulting business partner of Roger Stone, who was himself vigorously supporting Trump’s bid. Manafort was itching to get back into the American political arena, and Trump’s steamrolling campaign would be a logical landing place.

Chalupa also had good sources in Kiev who were focused on Manafort. These included Serhiy Leshchenko, a Ukrainian legislator opposed to Yanukovych’s Party of Regions and the Opposition Bloc, and Artem Sytnyk, NABU’s director. It was Sytnyk who took over and quietly closed the investigation of Burisma after Vice President Biden got Poroshenko to pink-slip the prosecutor.

Leshchenko just happens to be a vassal of Victor Pinchuk, a Ukrainian billionaire who just happens to give millions of dollars to the Clinton Foundation. Wonder of wonders, Leshchenko took a public, strident anti-Trump position during the U.S. campaign — highly unusual for a foreign parliamentarian. “A Trump presidency would change the pro-Ukrainian agenda in American foreign policy,” he told the Financial Times, so it was “important to show not only the corruption aspect” of the mogul, but also that Trump was “a pro-Russian candidate who can break the geopo- litical balance in the world.” That, he added, was why most Ukrainian politicians were “on Hillary Clinton’s side.” (I’m sure she was thrilled about the enthusiasm in Kiev, but enthusiasm in Wisconsin might have been more helpful.)

During the same early 2016 weeks when Chalupa was tapping her Ukrainian sources and giving Democrats a heads-up about a potential Manafort-Trump alliance, NABU investigators and Ukrainian prosecutors journeyed to Washington. There, the Obama administration arranged for them to huddle with the FBI, the Justice Department, the State Department, and the White House’s National Security Council (agencies that coordinated frequently throughout the collusion caper). Andrii Telizhenko, a political officer at Ukraine’s embassy in Washington, later told The Hill’s John Solomon that the U.S. officials uniformly stressed “how important it was that all of our anti-corruption efforts be united.” The officials also indicated to their Ukrainian counterparts that they were keen to revive the investigation of payments by Yanukovych’s ousted Party of Regions government to an American political consultant — i.e., the FBI’s Paul Manafort probe. I know this may be hard to believe, but the Obama officials seem to have been less interested in Greg Craig than in Manafort.

Nazar Kholodnitskiy, Ukraine’s chief anti-corruption prosecutor, told Solomon that soon after the January 2016 Washington meetings, he found that Ukrainian officials were effectively meddling in the American presidential election. Another top Ukrainian lawman, Kostiantyn Kulyk, recalled that after the Kiev contingent’s return home from the United States, there was lots of buzz about helping the Americans with the Party of Regions investigation.

Which brings us back to Serhiy Leshchenko, Ukraine’s unabashed Clinton backer. And whaddya know — besides serving the government in Kiev and providing scintillating geopolitical analysis, Leshchenko had a side job: he was a source for...wait for it...Fusion GPS — the Clinton campaign-opposition arm, led by Glenn Simpson, which later dreamed up the Steele dossier.

Turns out it was Leshchenko (along with NABU chief Sytnyk) who leaked the unverified Yanukovych ledger to the media in May 2016, just after it was announced that Trump had made Manafort his campaign chairman. There is also a pending investigation into whether Leshchenko attempted to blackmail Manafort by sending text messages to the consultant and his daughter, threatening to give NABU, the FBI, and the media “bulletproof” evidence of Manafort’s financial dealings with Yanukovych.

The ledger’s exposure, of course, is what led to Manafort’s ouster as Donald Trump’s campaign chairman. The Ukrainian payments became an important strand of the Russia-gate narrative. The wealth that Manafort’s Ukrainian work generated formed the foundation of his prosecution by Special Counsel Mueller for tax, money laundering, and unregistered foreign-agent offenses.

Can anyone say "Clinton campaign collusion with Ukraine"? The Ukrainian courts can: In December 2018, one such tribunal ruled that Leshchenko and Sytnyk had violated Ukrainian law by leaking the ledger. The infraction, the court added, “led to interference in the electoral processes of the United States in 2016 and harmed the interests of Ukraine as a state.