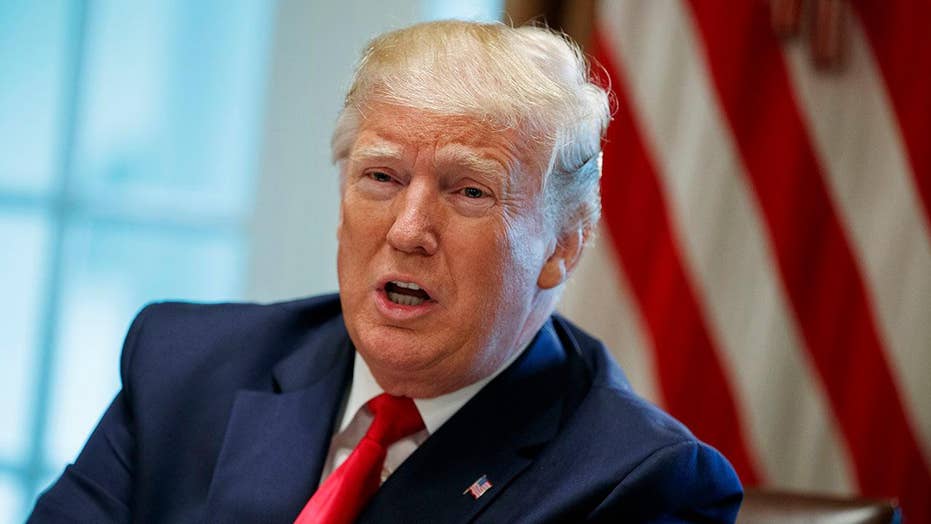 Republicans are accusing Democrats of not wanting President Trump to get a win as the White House ramps up efforts to address the border crisis; Mike Emanuel reports.

In a dramatic and unwise escalation of his crackdown on unauthorized immigration, President Trump has tweeted that the Immigration and Customs Enforcement Agency will begin “removing millions of illegal aliens who have illicitly found their way into the U.S.” next week.

If the Trump administration follows through on this pledge, the action would mark a very dark turn that would permanently alter America’s moral standing on the world stage.

America is better than this.

Our country is already dealing with a significant challenge at our southern border: a large increase in migrants primarily from Guatemala, El Salvador and Honduras who are seeking refuge in the United States as they flee violence and poverty.

We need more resources – not fewer – dedicated to managing the men, women, and children who are arriving daily, in order to ensure that they are able to pursue their asylum claims in a fair and efficient manner.

If the president orders Immigration and Customs Enforcement officers to move away from that critical mission in order to focus on the detention and deportation of people who are -- in the vast majority of cases -- not public safety threats, the humanitarian crisis will only worsen.

In fact, such a large-scale enforcement operation, targeting more than 1 million undocumented immigrants with final deportation orders, would create a humanitarian crisis of its own.

An action of this scale would make last summer’s family separation efforts look tame in comparison.

Children – many of whom are U.S. citizens – would be separated from their parents in big cities and small towns across the nation. The resulting videos and images would shake the conscience of our country and inject fear and chaos into American life, the likes of which we haven’t known in a very long time.

For the mothers and fathers suddenly deported, the administration would need to dedicate substantial resources to ensure children in school, day care, summer camp, and at a friend’s house when their parents are taken away are cared for safely and humanely.

Already, Customs and Border Protection is struggling to care for children in its custody and the Department of Health and Human Services is relying on military bases to house children.

As we learned last summer, there is no compelling reason to separate families and torment children. That’s not who we are as Americans.

It’s also not how we keep our communities safe. Sending undocumented immigrants further into the shadows in fear of law enforcement makes it easier for criminals to commit crimes. It silences witnesses and victims alike and would further exacerbate the challenges law enforcement officials face.

Already fewer immigrants are reporting domestic abuse. In the words of Houston Police Chief Art Acevedo: “Undocumented immigrants and even lawful immigrants are afraid to report crime” as a result of headlines about deportations.

Yes, we need to attract and retain skilled engineers. We also need skilled farmworkers – and at least 50 percent of farm laborers are undocumented, according to the American Farm Bureau Federation’s estimate.,

Storm Lake, Iowa, Police Chief Mark Prosser tweeted Tuesday morning in response to the president’s threat: “Such strategy will damage the efforts of local (law enforcement) agencies in building partnerships in order to make our cities safer. There is a better way.”

The president could be entering his re-election campaign touting a strong economy – but his promised mass deportations threaten our economic competitiveness. An aging population and labor shortages will make it harder for new businesses to launch and existing business to grow.

Yes, we need to attract and retain skilled engineers. We also need skilled farmworkers – and at least 50 percent of farm laborers are undocumented, according to the American Farm Bureau Federation’s estimate. Farm jobs contribute to millions of jobs in food processing, trucking and distribution that are filled by American citizens.

The data is clear: We need more workers, not fewer. If we send a dark message that the U.S. is closed to immigrants and their children, talent will flow to China, Germany, Canada and India – not to our factories, farms, and tech hubs.

Finally, threatening to remove millions of immigrants might fire up the president’s base, but it won’t help him win in re-election in November 2020. According to a recent Fox News poll, half of voters already say the administration’s immigration enforcement “has gone too far.”

Just wait until we see the images of children coming home to find that their parents have been taken away. This hard turn on immigration will not sit well with anyone beyond the president’s most dedicated supporters. Most Americans will realize how profoundly the Trump administration has failed when it comes to immigration policy.

But there’s also no denying that America became the most prosperous and powerful country on the planet because we opened our doors to people born elsewhere who have come in and contributed, even though some lack legal status.

Slamming those doors shut, especially by means that separate families and tear apart communities, would be a tragic mistake.