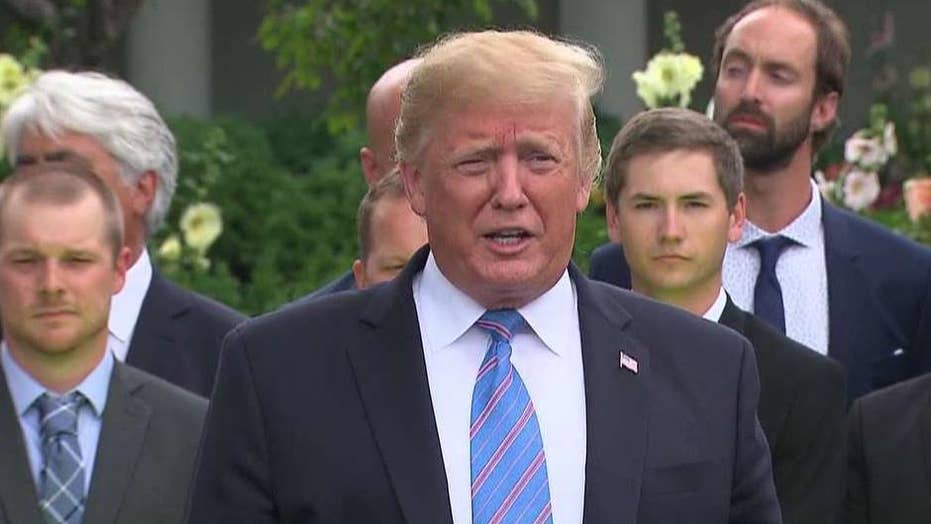 Fifty-seven percent of voters feel optimistic about the economy. That’s down from 66 percent who felt that way when President Trump was inaugurated in early 2017, and from 63 percent who were optimistic in February.

In addition, a new Fox News Poll finds 31 percent feel everyone has benefitted under Trump’s economic policies, but 48 percent think only “people with more money” have benefitted -- and just 5 percent of voters feel “people like me” are better off.

More than twice as many Republicans as Democrats feel optimistic about the economy today, and Republicans (65 percent) are more than 10 times as likely as Democrats (6 percent) to think “everyone” has benefitted under Trump’s economic policies.

On tariffs, voters say they hurt (45 percent) rather than help the U.S. economy (33 percent) and nearly 8 in 10 have concerns tariffs will hit home by making things they buy more expensive.

Majorities favor giving legal status after a background check to illegal immigrants under age 30 brought to the U.S. as children (73 percent favor), increasing the number of agents along the southern border (69 percent favor), and increasing spending on security measures other than the wall (67 percent favor).

"Border wall aside, what's fascinating about immigration attitudes is that Americans are with the Republicans when it comes to wanting stronger border security, but with the Democrats on wanting a pathway to citizenship,” says Republican pollster Daron Shaw, who conducts the Fox News Poll with Democratic counterpart Chris Anderson.  “In the old days, that would be the basis for a compromise."

There is growing talk from Democratic presidential candidates and President Trump about cracking down on the power of tech giants.

For voters, Facebook is the biggest tech concern, as 61 percent say the technology company has too much power.  That drops to 48 percent for Google, 45 percent for Amazon, and 43 percent for Apple.

For government agencies, 60 percent say the IRS has too much power, while 43 percent feel that way about the NSA and 40 percent about the FBI.

Conducted June 9-12, 2019 under the joint direction of Beacon Research (D) and Shaw & Company (R), this Fox News Poll includes interviews with 1,001 randomly chosen registered voters nationwide who spoke with live interviewers on both landlines and cellphones.  The poll has a margin of sampling error of plus or minus three percentage points for all registered voters.