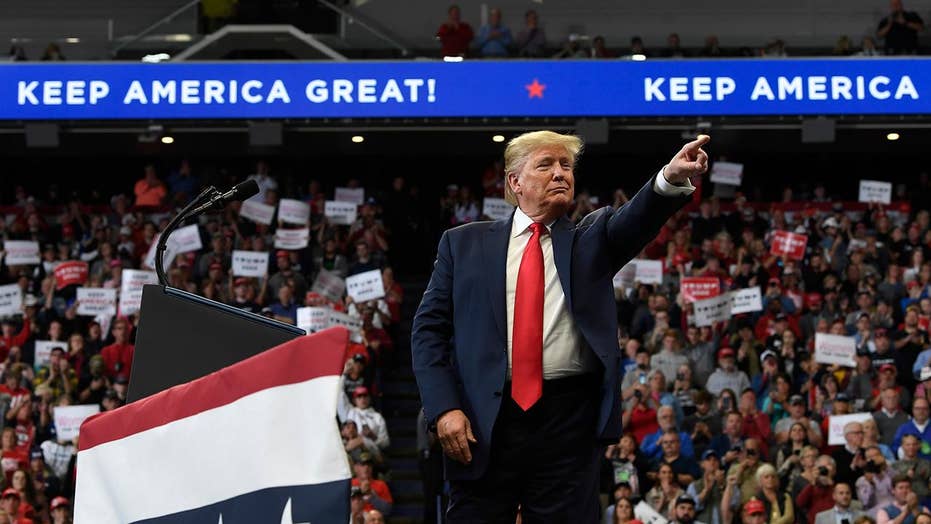 President Trump talks about how his tariffs helped the farmers, how his administration is replacing NAFTA with USMCA. 'Democrats need to pass the USMCA,' Trump said.

This month 399 years ago, brave Pilgrims crossed the treacherous Atlantic Ocean and journeyed to the New World in search of a new start, freedom and a better life. They landed at Plymouth Rock in Massachusetts – a new and strange place where they knew no one, had no shelter, and lacked basic necessities like food and clean water.

In the face of all of this, they did not give up. If it weren’t for the genuine compassion of the Native Americans who helped the Pilgrims plant crops and taught them about the New World, the Pilgrims would have come to a disastrous end. Once the cold hard winter broke to spring, the first thing they did was break bread and give thanks with their families, friends, loved ones, and fellow travelers who embarked on this mission for freedom.

As the leaves change, the days get shorter, and we join loved ones for Thanksgiving dinner, let us not forget those who put this bounty on the table: America’s farmers.

NEWT GINGRICH: FIRST THANKSGIVING WASN’T LIKE WHAT YOU WERE TAUGHT IN SCHOOL – HERE’S THE TRUE STORY

Because of our farmers, Americans are blessed with an abundance of nutritious and affordable food. In 1950, almost 20 percent of disposable personal income was spent on food. Today, at-home food consumption spending is just 6.4 percent of household expenditures – the lowest of any nation in the world.

There are over 3.4 million farmers in the U.S., producing enough food to feed, fuel and clothe America and much of the world. While this is no easy job and farmers have had a tough year, we still have a lot to be grateful for. North, South, East and West, their practices may be a little different, their crops varied, but the core American spirit is still alive and well in our farmers.

When you sit at the table this Thanksgiving and take a slice of turkey, a scoop of sweet potatoes, a piece of pumpkin pie, and a serving of cranberry sauce, remember the families of farmers who toiled the land for your meal.

Over 118 million American families are expected to feast this Thanksgiving. The sweet potatoes on the table most likely came from North Carolina where the Scott family has been farming for six generations.

The pumpkin in your pie was probably grown in the Land of Lincoln – Illinois farms 11,000 acres for pumpkins, the nation’s largest producer.

Your cranberries most likely came from a bog in Wisconsin, where $143 million in cranberries are grown every year.

Finally, your turkey was likely raised in Minnesota, the largest producer of turkeys in the country. In fact, America’s turkey producers are the most productive in the world. Roughly 1,900 family farms raise approximately 198 million turkeys each year.

This Thanksgiving, American families will roast nearly 46 million turkeys and eat over 50 million pumpkin pies, all while stimulating the rural economy and impacting the lives of thousands of food industry professionals, small business owners, and farmers.

Thanksgiving has always been about connecting with our fellow Americans, family members and loved ones. President Abraham Lincoln proclaimed this holiday in 1863 during great conflict. He saw the bindings that hold us together were fraying in the onslaught of the Civil War, so he proclaimed a day of thanks and reflection.

Lincoln said: “They are the gracious gifts of the Most High God…. It has seemed to me fit and proper that they should be solemnly, reverently and gratefully acknowledged as with one heart and one voice by the whole American People.”

President Lincoln understood that in the midst of a terrible war, we still had so much to be grateful for, including our freedom and our faith.

The holidays give us a chance to take a moment and reflect on our blessings and how grateful we are to live in this extraordinary country. While things aren’t always easy, we must remember what’s important: family, friends, and those who sacrifice so we can spend the day feasting with our loved ones.

So, when you sit down at the dinner table this Thanksgiving, remember to thank the American farmers and the compassion and perseverance of our forebears. Be thankful you are an American and among those who love you.

Sonny Perdue has served as the United States Secretary of Agriculture since 2017. He served as the 81st governor of Georgia from 2003 to 2011.