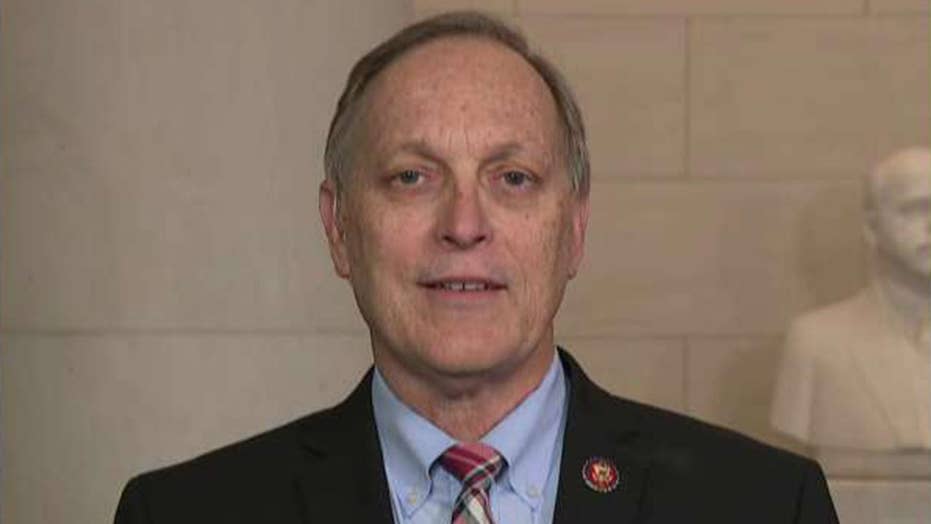 Bad-faith Democrats pushing the impeachment hoax on the heels of one illegitimate investigation of the president after the next are destroying our democracy as we know it.

What separates America from a banana republic is the peaceful transition of power – something Democrats have steadfastly refused to honor, as they've never accepted the results of the 2016 presidential election.

Instead, they've been trying to derail President Trump from doing the job he was elected to do, by subjecting his administration and the American people to a never-ending barrage of partisan-fueled investigations – built on sand.

TUCKER CARLSON: IG REPORT IS A BIG, BIG PROBLEM FOR CNN, OTHERS – THEY ARE EXPOSED AS LIARS AND KNOW-NOTHINGS

First there was the Russian collusion hoax concocted by Hillary Clinton; the Democratic National Committee; and chief conspiracy theorist Rep. Adam Schiff, D-Calif., a documented liar who told us for the past three years that Trump colluded with Russia to steal the 2016 election.

This massive lie and disinformation campaign Democrats waged with a helping hand from complicit #FakeNewsMedia not only harmed our country; it sowed corrosive distrust in U.S. elections.

This was a win for communist nations and rogue regimes that seek to weaken America – the greatest democracy on Earth. They can now send a thank-you note to the left for having done their unscrupulous work for them.

The inspector general report has now confirmed the FBI engaged in 17 falsehoods and omissions including obtaining deceptive Foreign Intelligence Surveillance Act (FISA) warrants, doctored evidence by an FBI official and withheld exculpatory evidence. All of which led to a highly divisive special counsel investigation by Robert Mueller to take down the president of the United States.

If this isn't a clear-cut case of election meddling, what is, exactly?

"Is it worse to have a foreign government trying to meddle in our elections, or is it worse to have our own government meddling in the election?" Sen. Josh Hawley, R-Mo., asked Inspector General Michael Horowitz during Wednesday's Senate Judiciary Committee hearing. "Because that's I think exactly what this report shows. It shows that our government, the most powerful law enforcement agency in the nation, the FBI, effectively meddled in an ongoing presidential campaign."

A conspiracy took place at the highest echelons of our government to try to stop Trump from getting elected, and when that collapsed, Comey admitted to having leaked sensitive memos to initiate the special counsel investigation, which ultimately found no evidence of Russian collusion or criminal wrongdoing by the president.

That was Democrats' first serious attempt to block America's time-honored tradition of transferring power peacefully from one party to the next following an election. This failed coup d'etat will forever tarnish the annals of history.

But instead of accepting the findings of multiple congressional investigations and the Mueller probe, Democrats just pivoted to their next hoax: impeachment.

Over the past several weeks, voters have witnessed desperate Democrats use a "pin the tail on the donkey" approach to finding cause for impeachment.

First they tried to pin allegations of a quid pro quo on the president following his July phone call with Ukrainian President Volodymyr Zelensky. When that didn't stick, lacking evidence, liberal lawmakers tried to pin bribery on our commander in chief. Finding no proof of yet another baseless allegation, Democrats settled on a generic abuse of power and obstruction of Congress.

These allegations are ambiguous to where even Democratic Rep. Stephen Lynch of Massachusetts called them "nebulous" during a TV interview this week.

It's no wonder that when House Speaker Nancy Pelosi, D-Calif., House Judiciary Committee Chairman Jerrold Nadler, D-N.Y., and company unveiled two questionable articles of impeachment this week, they simultaneously announced they'll bring the United States-Mexico-Canada Agreement forward for a vote – stepping on their own impeachment narrative.

Why? Because Pelosi knows how weak their case for impeachment is, so Democrats are deliberately trying to change the subject.

Given what we've seen so far, the president is 100 percent correct. Democrats' case for impeachment is predicated on partisan bureaucrats who only possess hearsay and presumptions –not evidence.

This is yet another failed coup attempt by the left to block the peaceful transition of power.

The question now becomes: When will voters say "enough"?