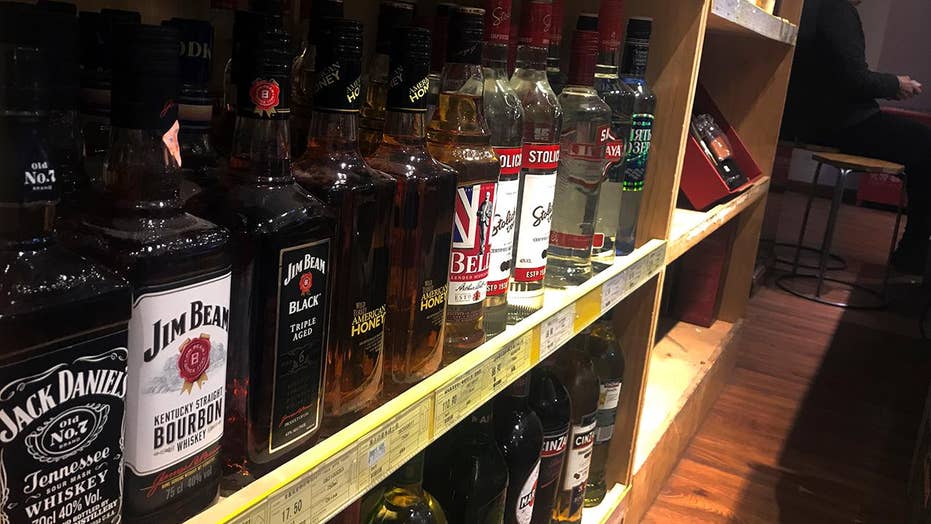 China responded to President Trump's new tariffs by firing back with its own import taxes on 106 U.S. products, including planes, cars and soybeans Deirdre Bolton has the latest.

The U.S. and China are not in a trade war yet – but they are in a rapidly escalating war of words that poses a danger to them both.

President Trump’s new threat Thursday to consider imposing tariffs on an additional $100 billion worth of Chinese products gives him leverage to negotiate a peace settlement that will avert economic warfare and benefit the U.S. But achieving this will not be easy.

You might call this challenge – if I may borrow a phrase from the president – the art of the deal.

President Trump’s new threat comes on top of a threat he made Tuesday to slap tariffs on $50 billion of goods imported from China, in addition to tariffs he imposed last month on Chinese steel and aluminum exports coming to the U.S. That brings the total amount of Chinese products imported into the U.S. each year that President Trump has threatened with tariffs to $153 billion.

What’s needed now are tough and serious negotiations between China and the U.S. to reach a reasonable and fair compromise that gives each nation some of what it wants.

Unsurprisingly, China matched the earlier tariffs President Trump floated with threats to impose its own tariffs on $53 billion worth of U.S. crops and products it imports annually.

However, China would have a hard time matching the new round of tariffs proposed by President Trump because it purchased only $130.4 billion worth of goods from the U.S. in 2017. In contrast, America imported $505.6 billion in Chinese goods last year.

President Trump pushes back on trade war with China

How will Americans be affected? Investment strategist Lindsey Bell shares her perspective on 'Fox & Friends First.'

China’s Ministry of Commerce responded to President Trump’s latest threat with a statement Friday that said: “If the United States disregards the opposition of China and the international community, insisting on unilateralism and trade protectionism, the Chinese side will follow suit and fight at any cost.”

But even if a deal is struck to prevent most of the new tariffs from taking effect, we have crossed an important milestone in the U.S.-China relationship. Both sides now realize the nature of their ongoing geopolitical struggle. It is not out of the question to wonder whether ties between these countries with the two largest economies in the world are entering a heated, almost Cold War atmosphere.

As I noted in an op-ed for Fox News this week, clearly China is no friend of America. Our two nations have very different trade as well as diplomatic, economic and geopolitical goals that will naturally create tensions for perhaps decades to come. And as President Trump pointed out Thursday, each nation is understandably seeking to come out on top in any deal the two work out.

What’s needed now are tough and serious negotiations between China and the U.S. to reach a reasonable and fair compromise that gives each nation some of what it wants. But this is now a matter for diplomacy – not tweets or off-the-cuff comments. It would be a strategic mistake for the U.S. and China to engage in a tit-for-tat war of words in the media, simply adding gasoline to the fire of their trade dispute.

This is especially true because there are some indications that Beijing may be ready to blink – for strategic reasons.

Thursday night I spoke with several top-tier Chinese academics, scholars, and economists – all close to the government, all with good insights into Beijing’s thinking on escalating trade tensions with Washington. They all echoed a very similar opinion: there is a possibility of a deal with America, even despite Beijing’s comments that no negotiations are likely, for very clear reasons.

The experts I spoke with talked to me on the condition that I not identify them by name, so they could speak candidly.

“China was not ready for the sheer magnitude of President Trump coming after us on the so-called trade imbalance,” a senior Chinese economist with close ties to the government told me. “However, there is a deal that could be struck, as both sides have a lot to lose, especially China, as we are not ready for economic warfare with such a big power as America.”

The economist continued: “What scares me, and many government officials, is the rhetoric is heating up very quickly, leaving both sides very little room to work out a deal. Both sides are making a big mistake, as trying to score quick points for their own domestic political audiences is a big error. Now is the time to get both sides in a room, lock the doors, and work towards a deal that is fair to everyone.”

A Chinese scholar, also with close ties to the Beijing government, agreed with that sentiment, but with a twist.

“Chinese officials will likely offer some strong concessions to make sure we avoid a trade battle with Washington,” the scholar told me. “At the moment, we aren’t fully ready to take America on, and must continue to grow our economic and military power. This confrontation is not in our interest, and must be, at least for the moment delayed, until we are in a more powerful position.”

This scholar explained that it might even be in China’s interest to “fold” on this issue, because Beijing has much bigger issues that it must confront in the coming years.

President Trump: We are not in trade war with China

Fears of another trade war spooking the stock market; Greg Palkot with the latest from London.

“China must think correctly on all of this trade discussion,” the scholar said. “Our goal is to ensure our rise is not halted. We have greater strategic goals in mind. Winning a trade skirmish with America could come at the highest of prices – and turning America into an enemy that we can’t hope to defeat, at least not yet. We must delay that day for as long as we can.”

A White House official, who spoke to me Friday on condition that I not name him, also expressed hope that a deal could be worked.

“President Trump has always said he was willing to negotiate with Beijing, that is nothing new,” the U.S. official said. “But we are done being suckers to China. We want fair, reciprocal trade. I think we can get there.” However, the official expressed some caution, stating quite clearly that “the ball is now in China’s court.”

What happens now is really anyone’s guess. I would argue that a deal is most likely possible, with both sides making some concessions, especially China on intellectual property and access for U.S. products to its massive domestic markets in the years ahead.

But, at the same time, we should be cautious. The Trump administration has invested precious political capital in making sure China not only understands our intent but understands that we will defend our interests – even if that requires America to take an economic hit.

The U.S. must make sure that any agreement protects American workers, our technological base and other vital national priorities. Such a negotiation could take some time and cause us some economic pain, but would protect our long-term economic interests.

There is, however, a much bigger challenge looming just over the horizon: China’s changing strategic outlook.

Beijing is adjusting its gaze across the globe, seeing America as a very real strategic threat – and posing an increasing threat to America. Just this week, Chinese defense officials offered words of support to Russia, forging ties that are looking more and more like a straight-up alliance.

Washington must be prepared for the long haul and be ready to confront Chinese power in the months and years to come.

A Chinese economist, based out of Hong Kong, who I have known for a long time now, put it bluntly: “Washington and Beijing are set to clash. It’s just a matter of when and how.”