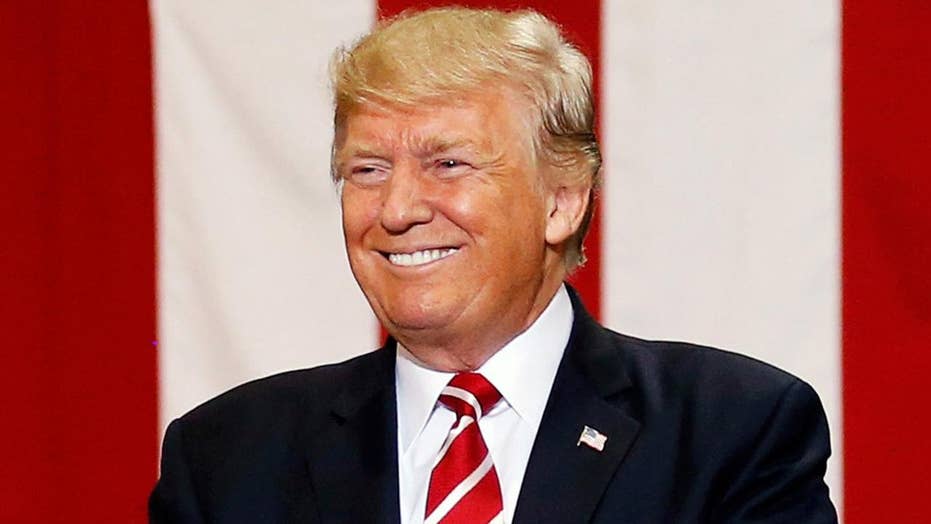 Does Trump deserve Nobel Prize for efforts with North Korea?

This past week, 18 Republican members of Congress nominated President Trump for the Nobel Peace Prize for his work to “end the Korean War, denuclearize the Korean peninsula, and bring peace to the region.” You’d think the media would applaud this potential honor – right?

CNN clearly was not pleased.

Neither was Washington Post columnist Dana Milbank, doing his impression of the better Dana – Carvey. Milbank wrote up his version of the Trump acceptance speech, but delivered it via column, without the same voice or wit. “I love Norwegians!” he wrote. “I want more immigrants from Norway and others who have the same merit-based complexion that Norwegians have.”

Everyone wanted a piece of the joke. Conan O'Brien told his TV audience: “A group of House Republicans has nominated president Trump for a Nobel Peace Prize. Yeah. As evidence they pointed out that Trump has managed to avoid an all-out war with North Korea and Melania.”

Of course, all of this quasi-news and comedy downplays a very real fact – President Trump accomplished something important.

South Korean President Moon Jae-in was among those who supported the idea of the peace prize for President Trump, saying: “It’s really President Trump who should receive it; we can just take peace,” The New York Times reported.

Back when President Obama won the 2009 Nobel Peace Prize, even some in the media were stunned. “Today” Co-Host Matt Lauer (pre-scandal) called it out: “We’re less than a year into the first term of this president and there are no – I'm not trying to be, you know, rude here – no major foreign policy achievements, to date.”

Lauer was right. Obama won the Peace Prize shortly after taking office. The reason? The prize was for something he hadn’t done, "for his extraordinary efforts to strengthen international diplomacy and cooperation between peoples." He was the fourth U.S. president to receive the award. Presidential wannabe Al Gore also won in 2007.

2. Brokaw Story Gets Worse: Sexual misconduct allegations escalated against former NBC anchor and current Special Correspondent Tom Brokaw. First he denied the allegations in a letter that “couldn’t be stronger,” according to The Washington Post’s Erik Wemple.

But Wemple followed by detailing the disturbing charges. He noted: “The 20-plus-year anchor of ‘NBC Nightly News’ isn’t on trial here.” Then he added, “NBC News, however, enjoys no such casual luxury.”

NBC has a major problem with transparency, a word often demanded from politicians by journalists. It had the same problem with the demotion of anchor Brian Williams. There is an identical issue involving the disastrous Joy Reid investigation at sister network MSNBC.

Brokaw was hit with back-to-back exclusives about the alleged support he received from women.

Variety broke its own story about the support letter. Headlined: “NBC News Urged Its Anchors to Report on Supportive Tom Brokaw Letter.” The combination undercut any support Brokaw received from it. A third woman also said Brokaw “gave her an unwanted ‘French kiss’ some 50 years ago.”

It was like watching reruns of “The Daily Show with Trevor Noah.” (Heaven help you.) For three years running, the so-called neutral White House Correspondents Association plucked its comedians from Comedy Central, the land of little-known, anti-conservative comics. Wolf was deservedly obscure, so much so that the journalist association that hired her apparently didn’t even do a background check and missed numerous offensive tweets.

When she hit the stage, journalists realized she went too far. Her attacks on White House women seemed particularly tone deaf for the #MeToo era. ABC Chief White House Correspondent Jonathan Karl was critical. Karl is the 2019 president of the association and he called the jokes “mean-spirited.”

But this is 2018 and anti-Trump comments always have media supporters. Seth Meyers and Noah soon chimed in on Wolf’s side. Stephen Colbert joined them.

A common theme of the defense of Wolf was echoed by NBC’s “Today” Co-host Savannah Guthrie, who quoted defenders arguing that “the president has said much worse.” Of course, the president is also a partisan and Wolf was hired by so-called neutral journalists.

The CNN reporter team rained 1,500 words and maybe a lot of dollar bills in pursuit of their “journalism.” “Screens around the club advertised Daniels' performance with revealing photos and the slogan ‘#MAGA – Make Adult Great Again,’” said reporter Hadas Gold.

If Daniels raked in the cash performing, her lawyer Michael Avenatti raked in the media coverage. Avenatti appeared on March 7 for the first time and has visited the supportive CNN team 59 times total – in just about two months. Anderson Cooper’s program accounted for 19 of those appearances.

CNN Editor-at-large Chris Cillizza followed up the Thursday press conference by saying President Trump “is a boss no one should be willing to work for. That includes Sarah Sanders.” His piece was headlined: “Why Sarah Sanders should quit.”

As a side note about how the media really work: Avenatti isn’t shy in the self-promotion department, allegedly pushing MSNBC for a job after the court battle is over. Interestingly, he’s had eight appearances on MSNBC in just four days.

5. Harassing a High School Student: One of the most idiotic stories of the week came courtesy of a Twitter war. Utah teen Keziah Daum was criticized for “cultural appropriation” for wearing a Chinese-style dress to her high school prom.

Twitter user Jeremy Lam gathered more than 40,000 retweets and 176,000 likes for his whine about what she wore. “My culture is NOT your g------ prom dress,” he posted. That set in motion a mob frenzy of attacks and stories, many of which got the most basic elements of the issue wrong.

The New York Times wrote: “Teenager’s Prom Dress Stirs Furor in U.S. – but Not in China.” Like many media outlets, The Times seemed to blame Daum for wearing the dress rather than Lam for his bullying reaction to what a high school student wore to prom. Yahoo wrote a similar headline: “Teen defends Chinese prom dress that sparked cultural appropriation debate: 'I would wear it again.'”

The dress didn’t “stir” or “spark” anything. That’s victim-blaming.

Cosmo, theoretically a pro-women site but really a pro-loon site, was worse. “Girl Slammed on Twitter for Culturally Appropriating Her Prom Dress Says She Would Wear it Again.” Even the Chinese admit it was “cultural appreciation, not appropriation.”

That was a point so clear that ABC’s lefty Anchor George Stephanopoulos got it right, saying: “It seems like, to me, I don’t know, on the right side of the line.”

When George thinks the left has gone too far, it’s hard to argue otherwise.