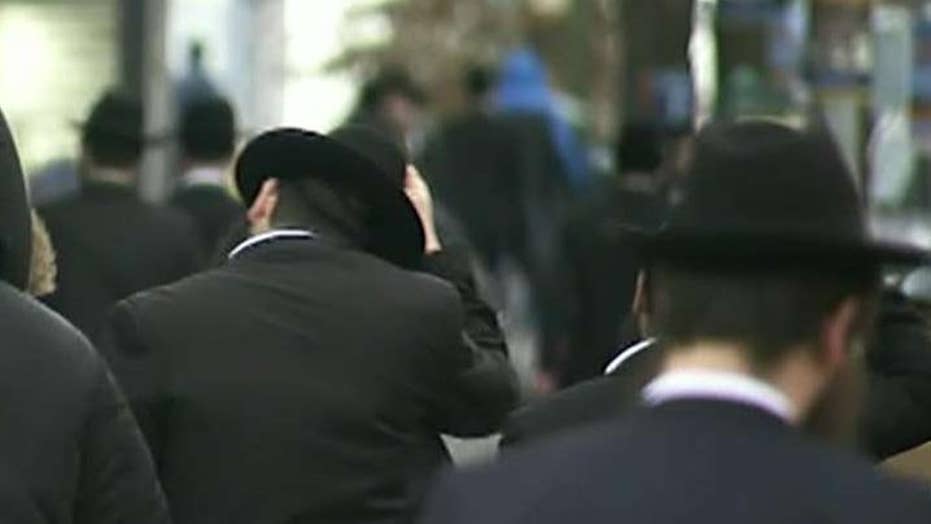 New York Gov. Andrew Cuomo made a statement saying hate crimes will not be tolerated; Rep. Lee Zeldin weighs in.

Rep. Lee Zeldin, R-N.Y., is blaming New York Mayor Bill de Blasio for a string of anti-Semitic attacks, including one on Friday.

There have been at least nine alleged anti-Semitic attacks in less than a week, much of it occurring during Hanukkah, according to authorities.

"It needs to happen more, and there needs to be some level of burden-sharing here. You need to see -- on all levels of government -- elected officials and community leaders going all in to confront this and crush it," Zeldin added, while appearing on "Fox & Friends."

De Blasio announced Friday that the NYPD would beef up its police presence in response to the attacks. "Hate doesn't have a home in our city," he tweeted.

NYPD INVESTIGATING WAVE OF ANTI-SEMITIC ATTACKS SINCE START OF HANUKKAH

"In light of recent anti-Semitic attacks, the NYPD will increase their presence in Boro Park, Crown Heights and Williamsburg. Anyone who terrorizes our Jewish community WILL face justice," he added.

The victim of the most recent attack was a man wearing Orthodox Jewish attire, 6ABC reported.  Another man punched him in the face while walking through Brooklyn's Borough Park neighborhood. Police have not yet classified it as a hate crime.

In another incident, a man threatened to shoot people after approaching a member of Brooklyn's Hasidic community.

Zeldin told "Fox & Friends" that the city's "feckless leadership is greatly concerning, and these people are being victimized and it's only getting worse until you see more people stepping up to confront it."

The congressman believes the apparent hate crimes stemmed from an eroding quality of life in the city, a lack of education and negative cultural influences.

The fifth night of Hanukkah was marred by the sixth reported anti-Semitic attack in the city this week. The attack unfolded Thursday in Brooklyn, where police said they arrested a woman who allegedly assaulted another woman, calling her an "[expletive] Jew."

The string of incidents began Monday, when a 28-year-old man allegedly punched and kicked a 65-year-old man in Manhattan while screaming, "[Expletive] you, Jew," the NYPD said. The victim suffered cuts to his face and hand.