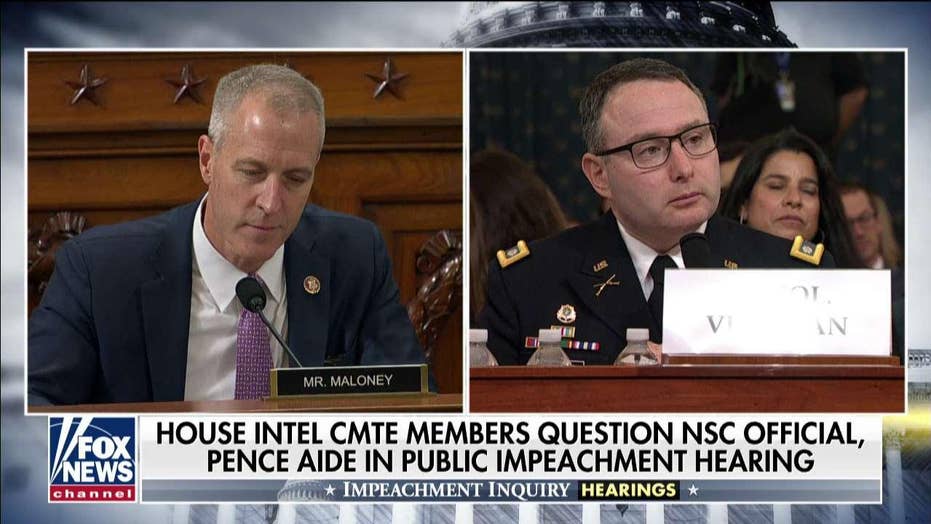 National Security Council official Lt. Col.&nbsp;Alexander Vindman drew applause during his congressional testimony Tuesday after he expressed his love for America before the House Intelligence Committee.

National Security Council official Lt. Col. Alexander Vindman drew applause from spectators during his congressional testimony Tuesday after he expressed his love for America before the House Intelligence Committee.

Rep. Sean Maloney, D-N.Y., was questioning Vindman and asked him to read a quote from his opening statement about his father, and his sense of duty. Vindman told his dad not to worry about possible backlash from his testimony, prompting Maloney to ask how he overcame his fear of reprisal.

"Congressman, because this is America. This is the country I have served and defended, that all of my brothers have served. And here, right matters," Vindman answered.

"Dad, my sitting here today in the U.S. Capitol talking to our elected officials, is proof that you made the right decision 40 years ago to leave the Soviet Union and come here to the United States of America in search of a better life for our family," Vindman's earlier statement said. "Do not worry — I'll be fine for telling the truth."

Vindman also acknowledged he was putting himself in the spotlight by coming forward, but said his faith in American values gave him the confidence to proceed.

"I knew I was assuming a lot of risk," he said. "[My father] deeply worried about [my testimony]. Because in his context, it was the ultimate risk."

“We have learned nothing new in today’s illegitimate ‘impeachment’ proceedings," White House press secretary Stephanie Grisham wrote in a statement. "However, buried among the witnesses’ personal opinions and conjecture about a call the White House long ago released to the public, both witnesses testified the July 25 transcript was ‘accurate’ and nothing President Trump has done or said amounts to ‘bribery’ or any other crime.

"Today’s hearing only further exposes that Chairman Schiff and the Democrats are simply blinded by their hatred for Donald Trump and rabid desire to overturn the outcome of a free and fair election," she added.