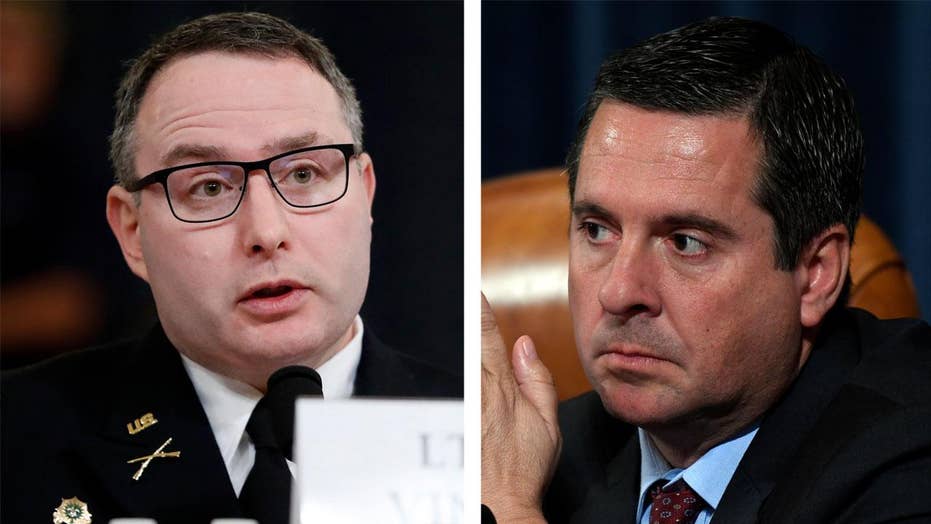 The moment came amid a back-and-forth over the identity of the anonymous whistleblower whose complaint about President Trump's July 25 phone call with Ukrainian President Volodymyr Zelensky led to the impeachment proceedings.

"Mr. Vindman, you testified in your deposition that you did not know the whistleblower," Nunes stated.

Nunes corrected himself and repeated the statement, which followed questions regarding who Vindman had spoken with about Trump's phone call. More than once, Committee Chairman Rep. Adam Schiff, D-Calif., interjected to advise Vindman that the purpose of the hearing was not to expose the identity of the whistleblower, who is afforded legal protection.

Vindman did say he spoke to two individuals regarding a readout of the call, and that both were government employees with a need to know. Nunes asked which agencies they were with, to which Vindman said he spoke to State Department official George Kent, and "an individual in the intelligence community."

Nunes pressed for which agency in the intelligence community that the individual worked for, which prompted Schiff to intervene.

"If the witness has a good faith belief that this may reveal the identity of the whistleblower, that is not the purpose that we are here for, and I want to advise the witness accordingly," Schiff said.

The controversy over this line of questioning is what led Nunes to remind Vindman of his previous testimony in which he said he did not know the whistleblower.

"I do not know who the whistleblower is, that is correct," Vindman said.

When asked how these questions could expose the whistleblower if Vindman does not know who they are, Vindman replied, "Per the advice of my counsel I've been advised not to answer specific questions about members of the intelligence community."