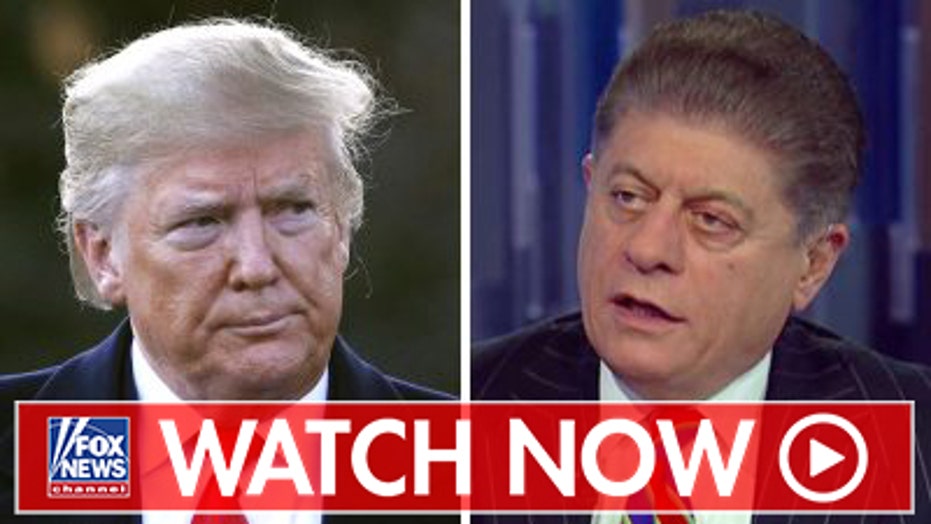 If a New York City prosecutor finds evidence of an alleged crime in President Trump's tax returns and is able to convince a grand jury, it would be unprecedented for America's courts, according to Judge Andrew Napolitano.

Napolitano claimed Monday on "Your World" that much was true because the 2nd Circuit Court of Appeals only ruled that Trump can be investigated by a state court -- and did not offer a ruling on whether he could be prosecuted by one.

"So, if District Attorney Vance persuades a grand jury that Donald Trump -- the private citizen before he was president -- committed a crime and he should be indicted, then we're in virgin territory -- that has never been resolved by any court whatsoever," he said.

Regarding Trump's request for a stay by the Supreme Court -- which would put the process on hold until the justices decide whether to hear the president's case -- Napolitano said that decision lies with Justice Ruth Bader Ginsburg -- who is tasked with ruling on such requests from New York State.

Napolitano said Ginsburg can decide whether to allow Vance's subpoena against Trump's accounting firm, Mazars USA, can go forward while the Supreme Court makes their decision to hear the case or not.

He said the circuit court ruled presidential privileges do not apply because the subpoena seeks documents from before Trump entered office -- and the fact the documents would not come from him but from his accountants and therefore the subpoena would not interfere with White House business.

"[It's] a perfectly rational opinion," he said.

Earlier Monday, Trump attorney Jay Sekulow pledged to appeal the 2nd Circuit's ruling to the Supreme Court, saying in a statement the, "The issue raised in this case goes to the heart of our Republic. The constitutional issues are significant.”

In addition, Trump has argued that the subpoena is unenforceable because a sitting president should not be subject to a state criminal process. The 2nd Circuit disagreed.

“We hold, however, that any presidential immunity from state criminal process does not extend to investigative steps like the grand jury subpoena at issue here,” the ruling written by Chief Circut Judge Robert Katzmann said.

The subpoena, issued Aug. 29, 2019, requested a variety of documents pertaining to Trump and his businesses, including “[t]ax returns and related schedules, in draft, as‐filed, and amended form” that Mazars possesses. Trump challenged it, arguing that he is not subject to the state criminal process while in office, and asked a federal District Court to declare the subpoena unenforceable during Trump’s presidency.