"The Five" panelists responded Wednesday to reports that CNN has settled a multimillion-dollar defamation lawsuit filed by Covington Catholic High School student Nick Sandmann over the network's botched coverage of a viral confrontation between Sandmann and a Native American elder that portrayed the Kentucky teen as the aggressor.

"This is really good news for everybody on the planet because it's a turning point," co-host Greg Gutfeld said. "Before, there were not any consequences to social media mobbery and the cancel culture ... "

Sandmann was swept up in controversy after a video clip depicted the "MAGA" hat-wearing student smiling at Nathan Phillips, who was beating a drum and chanting while surrounded by Sandmann's peers, who all had joined in on the chant in front of the steps of the Lincoln Memorial.

Several mainstream media outlets, including CNN, portrayed Sandmann and the other teens as being racially charged aggressors in the encounter. However, additional footage later surfaced confirming that a group of Black Hebrew Israelites had provoked the confrontation by slinging racial slurs at the Covington students as they were waiting for their bus following last year's March For Life event in Washington D.C.

Footage then showed Phillips, who was in town for the Indigenous Peoples March, approaching the students as tensions rose between the two groups.

Last March, Sandmann's attorneys filed a suit against CNN for its coverage of the incident, with the teen seeking a whopping $800 million in damages from CNN, NBC, and The Washington Post.

Fox 19 first reported that CNN settled with Sandmann on Tuesday for an undisclosed amount. The $250 million defamation suit sought damages for the "emotional distress Nicholas and his family suffered" in the fallout of the network's reporting.

"Now, if you know somebody can sue you, that changes your behavior. If you don't have deep pockets then your company has to be worried. I think this could put an end to the swarm," Gutfeld said.

Guest host and attorney Shannon Bream discussed the implications of the settlement. 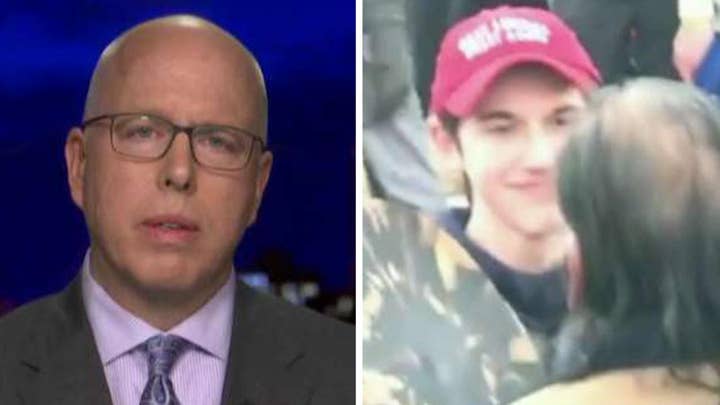 "CNN had to make calculations beyond the legal issues," she said. "When you go into discovery...some people say 'We don't want all of this stuff out there, we will pay.' Other clients say we are not paying a dime ... because if we pay this person, the next one will want it and the next one and the next one."

Brian Kilmeade said he hoped Sandmann was awarded a large amount in the settlement to use towards a college education and noted Sandmann's initial request from the network.

"This kid asked for an apology. If they said 'I blew it,' it would be over," Kilmeade said.

Sandmann’s attorney, Todd McMurtry, told Fox News that lawsuits against “as many as 13 other defendants will be filed in 30 to 40 days.”