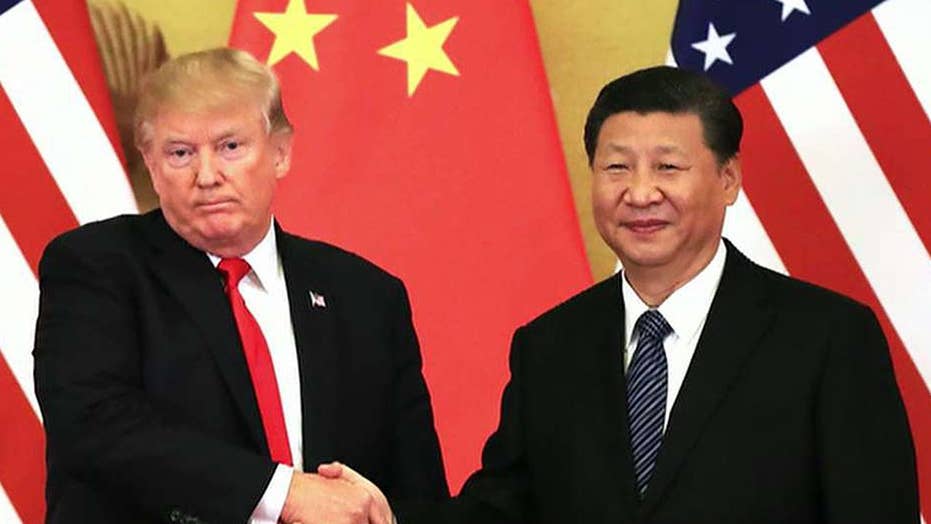 President Trump touts phase one of his trade deal with China as Beijing moves to cut tariffs on U.S. products; insight from Kansas Congressman Roger Marshall, Republican member of the House Agriculture Committee.

Rep. Roger Marshall, R-Kan., reacted on Monday to U.S. and China’s agreement to a “Phase One” trade deal last week saying, “President Trump has now made it possible for long-term success for our families.”

Marshall, a member of the House Agriculture Committee, made the comment on “America’s Newsroom” on Monday, the same day the Chinese Ministry of Finance announced tariff cuts effective Jan. 1 on frozen pork, asthma and diabetes medications, integrated circuit boards and about 850 other products.

While Marshall acknowledged “there was a record number of bankruptcies over the past several years,” he said, “This started over five years ago when we were going nowhere until President Trump got in the middle of this.”

“By the time China is done, he will have renegotiated over 50 percent of the United States’ trade agreements, giving us long-term certainty for all of our future generations of farmers.”

When asked if the relief is coming soon enough, Marshall answered, “Yes.”

“We have mountains of grain from two years ago sitting in Kansas with nowhere to go,” Marshall said. “But between the Japanese trade agreement, the president’s [United States-Mexico-Canada Agreement] USMCA trade agreement and now China getting closer, we’ve made it.”

The USMCA passed the House of Representatives on Thursday after both the Trump administration and House Democrats took credit for the $1.2 trillion deal they say will be better for Americans compared to the North American Free Trade Agreement that President Trump has referred to in the past as "NAFTA the disaster."

The bill now heads to the Senate, where Majority Leader Mitch McConnell has said he will take it up after an impeachment trial for President Trump.

“We’ve made it through the hard past five years, actually, and between the president’s help with some of the trade mitigation money and these contracts, these trade agreements going forward, yes, we are going to make it,” Marshall said on “America’s Newsroom” on Monday.

He acknowledged that the details of the “Phase One” deal with China are vague but said, “It’ll start influencing the price of crops and gives us long-term certainty.”

He added that the president “gave us some trade mitigation money, some market facilitation payments to help get us through these hard times because we were the tip of the spear.”

“Every time I go back to Kansas, people tell me, ‘thank the president for this mitigation money,’” Marshall said.