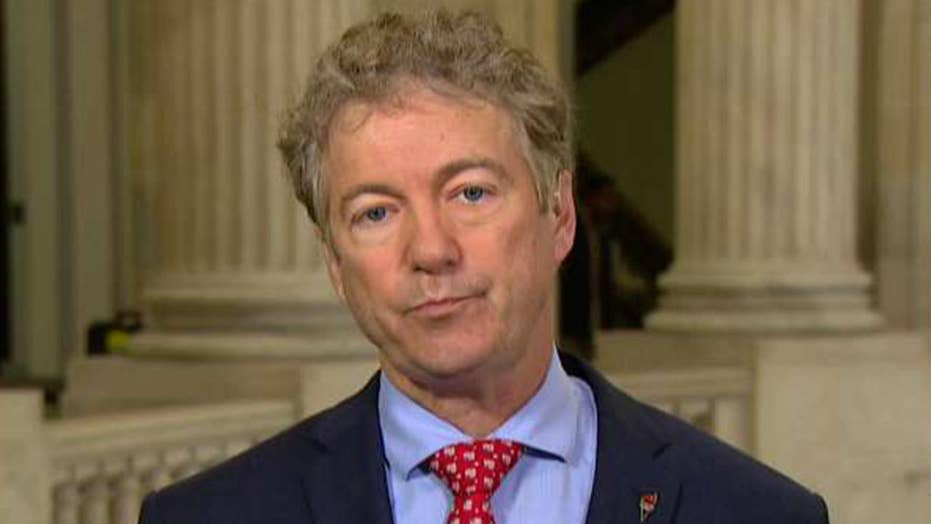 Paul on Tuesday responded to Rep. Liz Cheney, R-Wyo., the daughter of former Vice President Dick Cheney, who had told Fox News earlier Tuesday that it is "crucially important that [the U.S.] does not walk away" from Afghanistan.

"We know what happens when we walk away," the younger Cheney warned on "The Daily Briefing." "We are now in a situation where we've got a sufficient number of troops on the ground to prevent safe havens and people have got to remember that Afghanistan is a place from which the terrorists planned and plotted and trained and attacked us on 9/11 -- We cannot let that happen again."

Cheney's father was also a staunch supporter of the War on Terror when he served under President George W. Bush.

Reacting to a Washington Post report that top U.S. officials painted an optimistic public picture of the war in Afghanistan's progress while privately grousing that the conflict was unwinnable, Paul told Neil Cavuto it is another reason the Cheneys should fade into the political background.

"I think the Cheneys are unrepentant warmongers. They still won't admit that the Iraq War was a mistake," he said.

"What they need to realize that when we topple regimes -- when we topple strongmen that may not be the best of leaders -- what we get is a vacuum and we get more terrorism. So ostensibly, they want to go overseas to fight them over there and to wipe out terrorism, but it turns out we go over there and we end up having chaos when we depose regimes and have no government."

He claimed the Cheneys' foreign policy does the opposite of what they intend, remarking that continued war results in "more terrorism."

"America needs to quit listening to them. They need to fade into obscurity," he said.

Paul told Cavuto it is time for Congress to be able to exercise its Constitutionally-delineated ability to declare war or to not do so, as America's military has been operated under a Congressional Authorization for Use of Military Force since 2001.

"If the Cheneys want to advocate for staying forever in Afghanistan, I'm very happy to stand up to them and say 'no, it's time our boys and young women come home'," he said.

Earlier this year, Paul and the younger Cheney sparred in the wake of the successful U.S. mission to kill ISIS leader Abu Bakr al-Baghdadi.

"If you want to stop the endless wars, you actually have to leave. The U.S. guarding oil in Syria will only prolong the war & bring Kurds into conflict with [Syrian President Bashar al-Assad]. Mr. President: don't listen to [Senators] Lindsey Graham and Chuck Schumer and others who’ve been wrong for so long," he tweeted at the time.

Cheney later responded by claiming that Paul's policy of withdrawing troops from the region would have left al-Baghdadi alive "to behead more Americans."

"We should be proud of our troops and never surrender," she said.

In September, the two lawmakers again sparred, with Paul accusing her of "NeverTrump warmongering," and Cheney suggesting Paul was still upset he lost the 2016 Republican presidential primary race -- sharing a past tweet by President Trump that accused the Kentuckian of being a "spoiled brat."