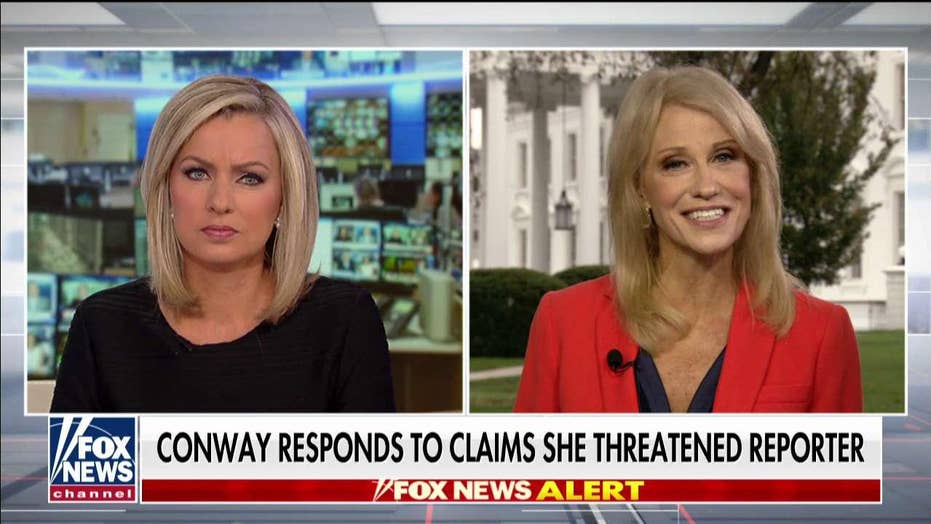 White House counselor Kellyanne Conway denied bullying a reporter Friday after the Washington Examiner released a recording of a phone call in which Conway ripped into one of their staffers.

Appearing on "America's Newsroom" with host Sandra Smith, Conway said that her comments to reporter Caitlin Yilek were not intended to be off-the-record and she "didn't much care" whether they became public.

"Everything I said in that phone call I've said publicly before," she said.

In the phone conversation, which occurred on Thursday, Conway ripped into Yilek, who had mentioned Conway's relationship with her husband, George, who has become an outspoken critic of President Trump on Twitter.

Conway has rarely commented on her relationship while serving in the White House, as her husband continues his pointed criticisms. The two appeared to have mostly avoided criticizing one another, although Conway did tell Fox News in July that she "totally disagreed" with an op-ed her husband had written.

Additionally, President Trump famously called George Conway the "husband from Hell" in March and claimed he was jealous of his wife's success.

"You're really going places," Conway told Yilek. "Let me tell you something, from a powerful woman -- don’t pull the crap where you’re trying to undercut another woman based on who she’s married to. He gets his power through me, if you haven’t noticed.

"So, listen," Conway continued, "if you’re going to cover my personal life...then we’re welcome to do the same around here. If it has nothing to do with my job, which it doesn’t, that’s obvious, then we’re either going to expect you to cover everybody’s personal life or we’re going to start covering them over here.

Conway told Smith in her Friday appearance on "America's Newsroom," "What I said is there for everybody to listen to and a lot of reporters, particularly old school reporters, have read it and contacted me. And, they have a very different opinion."

Part of the call included Conway asking about the way Yilek performed her job and questioning her title.

"When I was young and starting in my career, I was in the friend-making business," the White House adviser said on the call. "And I’ve worked super hard. You could have put that in paragraph two also. But I’m not caught in the middle of anything except trying to understand somebody whose title is breaking news reporter, what that means."

In a statement released Thursday, Editor-in-Chief Hugo Gurdon said "Off the record conversations are agreed in good faith and in advance between people known to be participating. They are not, and never have been, blanket coverage to shield people who pull a bait and switch, peremptorily enter the conversation, and then spend ten minutes abusing, bullying and threating a reporter. Other organizations may agree to be played for saps, but the Washington Examiner won't."

Yilek had repeatedly asked if Conway wanted to speak to her editor, but Conway said she didn't because it "wasn't important to me."

She urged viewers to "read her statement" about the interview on Twitter.

"The false tweet below makes my point about how dangerous it is to characterize someone else's intentions, feelings, or state of mind, even if it's for clicks and kicks," she wrote.

"I think that people constantly covering that is lazy, and it doesn't add to the conversation. So, that's all I asked," she added.