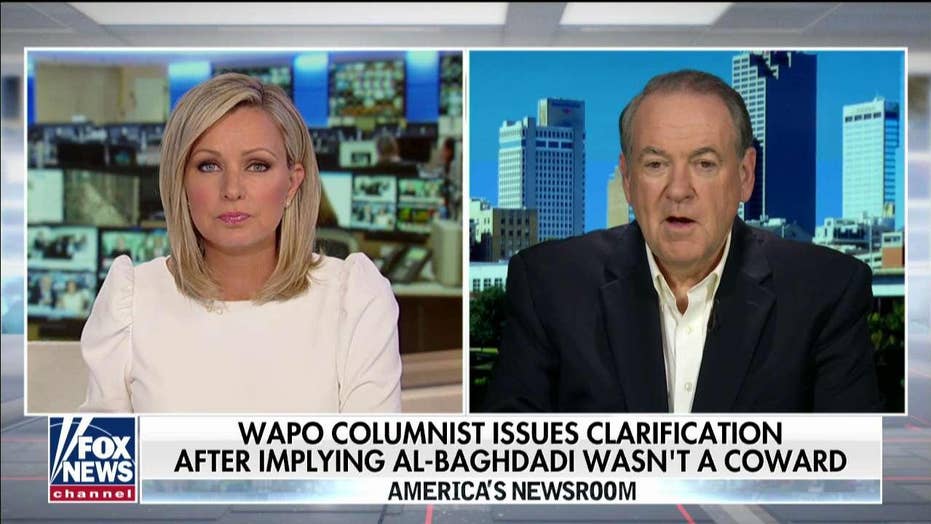 Fox News contributor Mike Huckabee reacted on "America's Newsroom" after The Washington Post columnist Max Boot issues a clarification in an article where he implied ISIS leader al-Baghdadi was not a coward.

The Washington Post faced an avalanche of criticism Sunday for initially describing Baghdadi as an "austere religious scholar" in the headline of a story about his death.

"The assertion that Baghdadi died as a coward was, in any case, contradicted by the fact that rather than be captured, he blew himself up,” Boot wrote.

Boot later printed a correction reading: “An earlier version of this column included a sentence questioning whether Trump was right to call Baghdadi a coward because he blew himself up. The line was removed because it unintentionally conveyed the impression that I considered Baghdadi courageous."

Huckabee told "America's Newsroom" host Sandra Smith that The Washington Post's corrections section is going to end up "bigger than the rest of the paper" and said that "the fact that [Boot] tried to defend Baghdadi is just stunning."

"Of course, Baghdadi is a coward," said Huckabee. "He took his children with him, ran into a tunnel, and then blew his own kids up. If that's not cowardly, then there's no definition of it."

"This is absurd," Huckabee added. "This guy was a rapist. He was a psychopathic murderer."

"He murdered and beheaded people in the press and even the press hate Trump so much they can't even recognize what a good thing it is to take Baghdadi off this planet and send him to Hell where he belongs," the former governor stated. "I'm just stunned by it."

"This is insane and the news media has shamed itself and they have disgraced themselves once again," Huckabee told Smith.