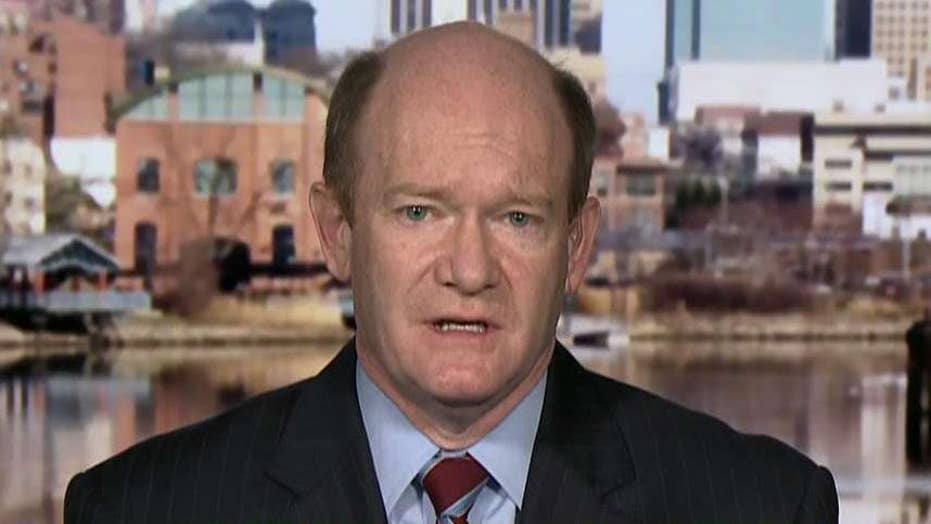 In an interview on "Fox & Friends," the Delaware senator said he was glad Trump denounced racism and white supremacy earlier in the week but was "puzzled" over Trump attacking Sen. Sherrod Brown, D-Ohio, and Dayton Mayor Nan Whaley after his visit to a hospital to meet with victims of the weekend mass shooting.

"We're in for a rough presidential season if there's more and more divisive rhetoric on both sides," he said, adding that the bigger issue is Democrats and Republicans working together, rather than attacking each other.

After the hospital visit, Trump took issue with comments Brown and Whaley made to reporters.

"Just left Dayton, Ohio, where I met with the Victims & families, Law Enforcement, Medical Staff & First Responders. It was a warm & wonderful visit. Tremendous enthusiasm & even Love. Then I saw failed Presidential Candidate (0%) Sherrod Brown & Mayor Whaley totally ... ....misrepresenting what took place inside of the hospital," he tweeted.

"Their news conference after I left for El Paso was a fraud. It bore no resemblance to what took place with those incredible people that I was so lucky to meet and spend time with. They were all amazing!"

"It's great to provide comfort and prayers, but it's more important that we take bipartisan action," said Coons, expressing optimism that action will be taken this time around.

Coons noted that Republicans in Ohio, like Gov. Mike DeWine, Sen. Rob Portman and Rep. Mike Turner, are calling for "decisive action" and there is bipartisan legislation that can be passed, like a bill from Sens. Pat Toomey and Joe Manchin to expand background checks and close loopholes.

He said the bill is supported broadly by Americans, including gun owners, because "it simply means there'd be one more layer of protection to ensure Americans exercising their Second Amendment right are doing so responsibly." Coons said "red-flag" laws should be enacted after prior warning signs were exhibited in high school by gunmen in Dayton and Parkland, Fla.

"We have to make it easier for families, for health care professions, for teachers and law enforcement, with due process, in those emergency situations to take action. ... This is going to take presidential leadership," he said.