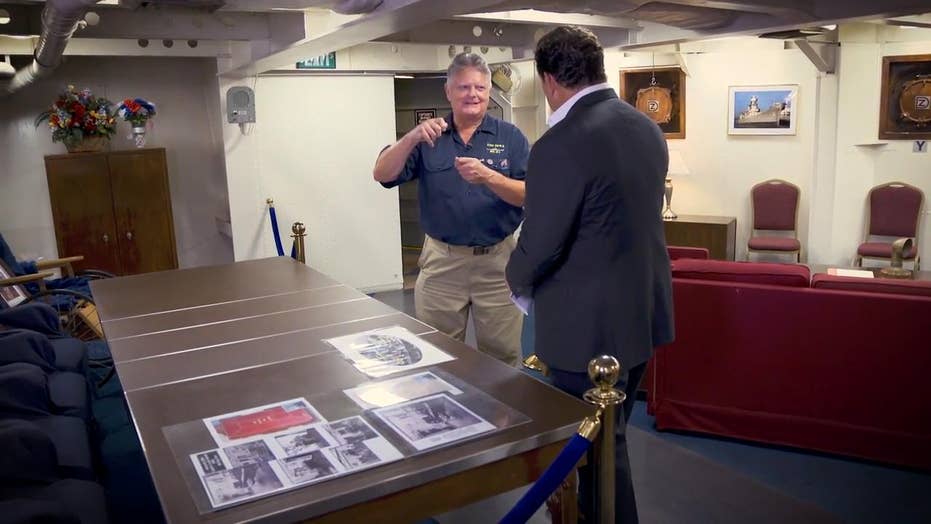 "On November 12th, 1943, under a veil of secrecy, President Roosevelt boarded the USS Iowa, from his presidential yacht at the mouth of the Potomac River, headed for arguably one of the most important meetings in the history of the world," Fox News chief political anchor Bret Baier told Fox Nation in a special edition of the new documentary, "Three Days At The Brink."

Little did FDR know, but in 48 hours, he would face one of the most serious and deadly threats to his life.

U.S. MARINE CRITICALLY WOUNDED AFTER JUMPING ON GRENADE HAS MESSAGE FOR AMERICANS

The special edition documentary details the 32nd president's trip across the Atlantic ocean to attend the secret Tehran Conference and meet with British Prime Minister Winston Churchill and Russian General Secretary Joseph Stalin to plot the D-Day invasion and the endgame of the worst conflict that the world had ever seen.

"Germany u-boats were everywhere in the Atlantic.  But it wasn't just the president... he had the entire war brain trust of World War II on one ship."

"The idea that the president of the United States would get on a ship and cross the Atlantic Ocean in the middle of World War II just seemed amazing to me," military historian and best-selling author Douglas Keeney told Fox Nation.

"Germany u-boats were everywhere in the Atlantic.  But it wasn't just the president. He had the head of the United States Air Force, the head and the commander-in-chief of the Navy, he had the head of the Army... he had 59 other generals, he had the entire war brain trust of World War II on one ship. And it was going to cross a sub-infested Atlantic Ocean and go all the way into the Mediterranean."

At the time it was launched, the USS Iowa was "the greatest warship of the United States Navy," according to Battleship Iowa curator Dave Way. The Iowa had a three-ship destroyer escort all the way across the Atlantic, but all of those precautions did not ensure the president's safety.

"The famous Porter incident, which was the second day out, Roosevelt and company... were all on the port side of the captain's cabin over by the admiral's veranda, actually watching a 40-millimeter firing demonstration against some balloons," recounted USS Iowa Museum volunteer Mike Hershman.

"The accompanying destroyer, the USS Porter, had decided on its own to have a torpedo drill," he continued.

"When you have a torpedo drill, you just simulate firing, you don't actually fire the torpedo and you pick out the nearest ship as your target. Well, they picked out [the USS Iowa].  They started to fire. Nothing happened... then boom. Here comes a live torpedo headed at the president of the United States."

"Initially, they didn't want to break radio silence," said Way.  "The signal lamp was used, but the sailor garbled the signal. Iowa didn't understand it. Porter finally broke radio silence and said, 'Hey, you have a life torpedo heading your way!'"

The USS Iowa immediately increased its speed and turned directly toward the incoming, armed torpedo. Despite the obvious concern on deck, FDR was apparently intrigued at the unforeseen adventure.

"[FDR] thought this was very entertaining," Way said of the wheelchair-bound president. "He asked the Secret Service folks to wheel him towards the edge of the railing and the Secret Service people -- they pulled their revolvers. They were going to shoot the torpedo."

In the confusion on the bridge of the USS Iowa, the admiral ordered the battleship's massive guns to be aimed at the USS Porter, suspecting that a potential assassination attempt was underway.

Luckily for the president and everyone onboard, the torpedo exploded about a thousand feet behind the battleship, where it was triggered by the wake.

When the USS Porter returned to port, they were ordered to the United States Naval Station in Bermuda. The whole crew was arrested and interrogated for three days until a sailor admitted that he accidentally left a live torpedo in the tube. The sailor was going to be sentenced to 14 years of hard labor when FDR intervened.

"The president stood in and said, 'We've all suffered enough. Let's just go on with the war,'" Way said.

To watch all of "Three Days at the Brink: FDR's Daring Voyage" FOR FREE go to Fox Nation.

Sunday, October 20 at 8 p.m. and 11 p.m. EDT Fox News will air the entire new special, “Three Days at the Brink”, where Bret Baier goes inside the Tehran Conference and FDR, Churchill, and Stalin’s risky plan to end WWII.  An exclusive director's cut will be available on Fox Nation.