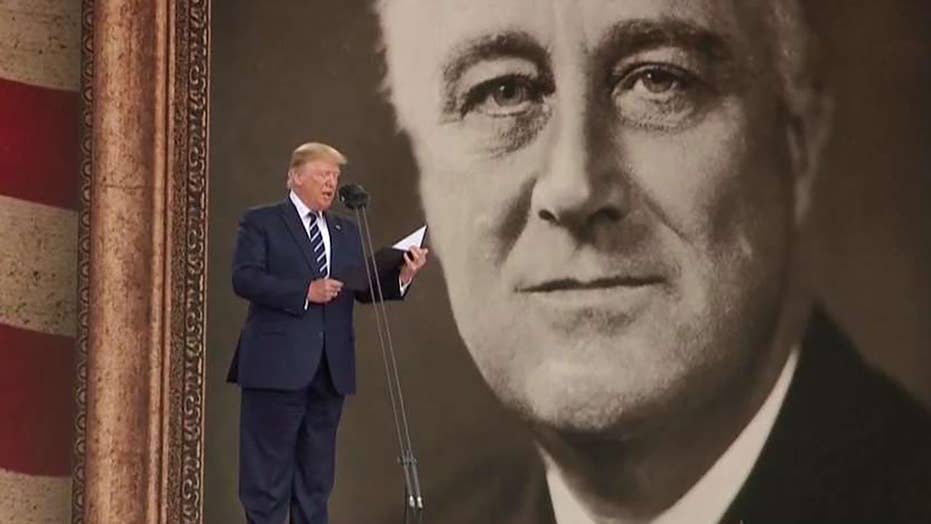 As we commemorate the 75th anniversary of D-Day, all generations should read and listen to President Franklin D. Roosevelt’s powerful D-Day prayer.

He didn’t call for a special “Day of Prayer.” He called for continued prayer. He knew that by God’s Grace, and the righteousness of our cause, that our sons would triumph. And he knew that with God’s blessing, we would prevail over the unholy forces of our enemy.

Roosevelt was a great communicator. And he knew how to use the power of radio to bypass the media and go straight to the American people.

In WWII, the very survival of western civilization was at stake. In freedom’s darkest hour, America’s Commander-in-Chief turned to the Almighty and understood the power of prayer. FDR had a letter printed in the Soldier’s Pocket Bible given to soldiers leaving for war in which he took pleasure “in commending the reading of the Bible to all who serve.” On the evening of D-Day, June 6th 1944, President Roosevelt went on radio to address the nation, but he did so by asking the American people to join him in prayer.

I am concerned that many of our younger generation don’t understand what it really means to be an American and don’t have an appreciation of what our men and women in uniform have done over the years to give us the freedom we enjoy today. Unfortunately, we don’t emphasize American history and civics in our schools like we used to. A recent study found that 22 percent of millennials weren’t sure if they knew what the Holocaust was. And 67 percent had not heard of Auschwitz, the Nazi death camp where more than 1 million Jews and others were murdered.

As we observe the 75th anniversary of D-Day, it was great to see President Trump read excerpts of FDR’s D-Day prayer in Portsmouth, England on Wednesday.

The great Anglican evangelist, Dr. John Guest, says that there is a “battle going on for the soul of America.” Guest, who spent many a night in a London air raid shelter as a boy, wonders what those who gave their lives on the beaches of Normandy would say if they saw what was going on today.

As we observe the 75th anniversary of D-Day, it was great to see President Trump read excerpts of FDR’s D-Day prayer in Portsmouth, England on Wednesday. Following congressional action a few years ago, there is currently an effort underway to have President Roosevelt’s D-Day prayer added to the National World War II Memorial. It should be. And it should be read and studied in our high schools and on our college campuses.

President Roosevelt’s D-Day prayer reminds us of what the “Greatest Generation” did to save the free world. And it reminds us, too, of the strength and humility of a U.S. president who understood the power of prayer and who asked the American people to join him in praying to God during freedom’s darkest hour.

"My fellow Americans: Last night, when I spoke with you about the fall of Rome, I knew at that moment that troops of the United States and our allies were crossing the Channel in another and greater operation. It has come to pass with success thus far.

And so, in this poignant hour, I ask you to join with me in prayer:

Almighty God: Our sons, pride of our Nation, this day have set upon a mighty endeavor, a struggle to preserve our Republic, our religion, and our civilization, and to set free a suffering humanity.

Lead them straight and true; give strength to their arms, stoutness to their hearts, steadfastness in their faith.

They will need Thy blessings. Their road will be long and hard. For the enemy is strong. He may hurl back our forces. Success may not come with rushing speed, but we shall return again and again; and we know that by Thy grace, and by the righteousness of our cause, our sons will triumph.

They will be sore tried, by night and by day, without rest-until the victory is won. The darkness will be rent by noise and flame. Men's souls will be shaken with the violences of war.

Some will never return. Embrace these, Father, and receive them, Thy heroic servants, into Thy kingdom.

And for us at home -- fathers, mothers, children, wives, sisters, and brothers of brave men overseas -- whose thoughts and prayers are ever with them--help us, Almighty God, to rededicate ourselves in renewed faith in Thee in this hour of great sacrifice.

Many people have urged that I call the Nation into a single day of special prayer. But because the road is long and the desire is great, I ask that our people devote themselves in a continuance of prayer. As we rise to each new day, and again when each day is spent, let words of prayer be on our lips, invoking Thy help to our efforts.

Give us strength, too -- strength in our daily tasks, to redouble the contributions we make in the physical and the material support of our armed forces.

And let our hearts be stout, to wait out the long travail, to bear sorrows that may come, to impart our courage unto our sons wheresoever they may be.

With Thy blessing, we shall prevail over the unholy forces of our enemy. Help us to conquer the apostles of greed and racial arrogancies. Lead us to the saving of our country, and with our sister Nations into a world unity that will spell a sure peace a peace invulnerable to the schemings of unworthy men. And a peace that will let all of men live in freedom, reaping the just rewards of their honest toil.

Thy will be done, Almighty God.