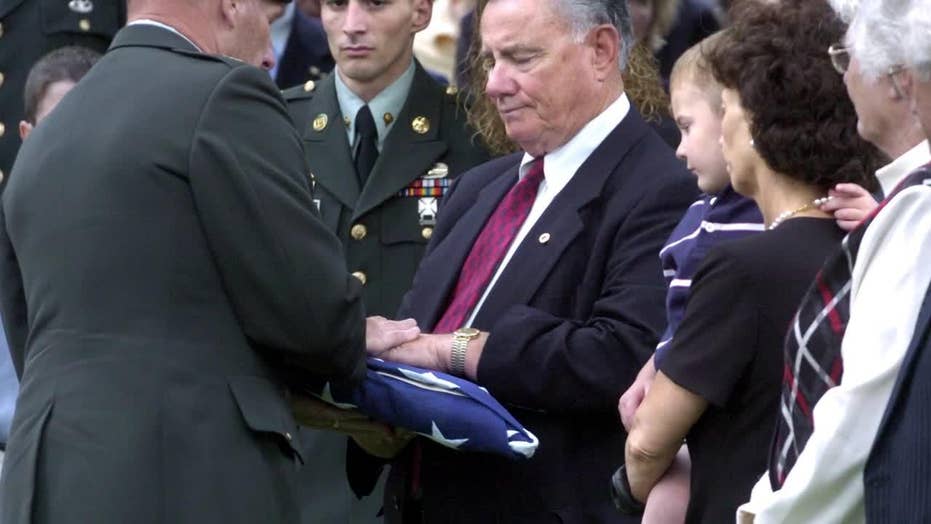 Air Force Lt. Col. Dan Rooney was returning from his second tour of duty in Iraq when he boarded a flight in Chicago and saw a young corporal sitting in first class.

It wasn’t until the flight landed around midnight in Grand Rapids, Mich. that Rooney realized that the soldier was the brother of another hero, whose remains were also onboard.  But it was the actions of his fellow passengers that drove Rooney to change the course of his life to help others.

In Fox Nation’s documentary “Godspeed: Folds of Honor Story,” Rooney told Fox Nation about the moment that he felt “the hand of God” and was inspired to start the Folds of Honor Foundation.

“I was living a very myopic life when God intervened and said ‘Hey, I’ve got a different plan,’” Rooney told “Fox and Friends” co-host Pete Hegseth.

"The captain comes over the PA and makes an announcement," Rooney remembered. “He says 'Ladies and Gentlemen, we have an American hero on board'… The captain continues his announcement very emotionally and says 'We’re carrying the remains of Corporal Brock Bucklin on this flight, who had been killed in Iraq, and his identical twin brother, Corporal Brad Bucklin is in First Class.'"

The captain encouraged everyone on the plane to stay in their seats until Cpl. Brock Bucklin's remains were removed from the plane.

“I watched the Bucklin family on the darkest night of their lives,” said Rooney. “Including Brock’s four-year-old son ... I still remember his eyes fixated on his dad’s American flag-draped coffin as it inched from the cargo hold and you realize this young boy is never going to play catch with his dad again.”

Rooney said he watched until the end of the ceremony – only to stand up and realize that more than half the flight's passengers had left, ignoring the captain’s request.

"I was so disappointed to be an American – this is what we’ve come to, right?  People can’t sit on a plane for 30 minutes to honor Brock’s ultimate sacrifice and in that moment of despair I felt a hand on my shoulder," said Rooney.

Rooney said he was inspired to found Folds of Honor, a nonprofit organization that provides educational scholarships to families of fallen or disabled military men and women.

“I was so disappointed to be an American – this is what we’ve come to right?  People can’t sit on a plane for 30 minutes to honor Brock’s ultimate sacrifice..."

In an exclusive interview with FoxNews.com, Rooney said that people sit up and take notice when they “realize that there are two million dependents of the veterans of the Iraq and Afghanistan wars and nine out of ten of them don’t get any federal education assistance.”

On Nov. 6, Fox Nation is hosting its inaugural Patriot Awards in St. Petersburg, Fla, with proceeds donated to the Folds of Honor Foundation.

“We’re very blessed when you look at something like the Patriot Awards," Rooney told FoxNews.com "There are few undertakings as patriotic as taking care of wounded service members and the families of the fallen veterans."

To watch all of "Godspeed: The Folds of Honor Story" go to Fox Nation and sign up today.