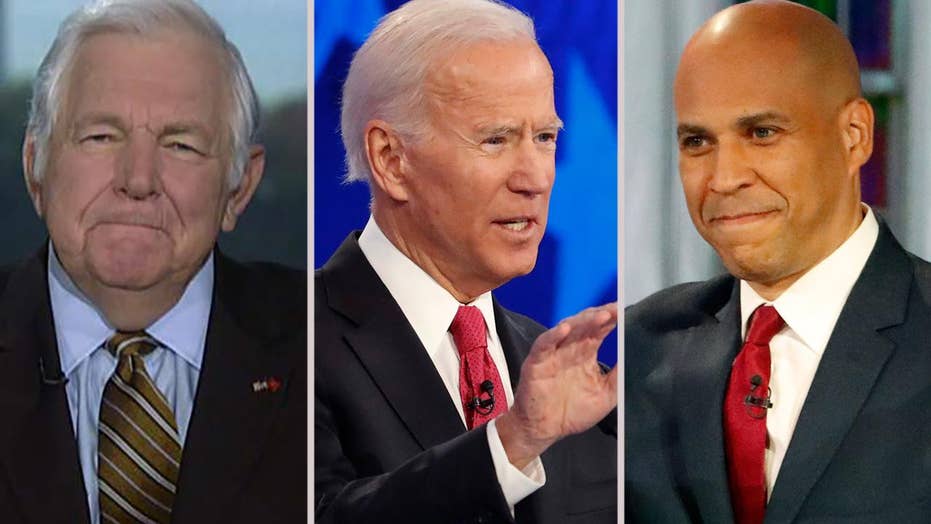 Sen. Cory Booker's campaign maintained on Friday that, despite lagging in polls, the candidate could win the Democratic nomination by uniting racial minorities and, in particular, undecided African-American voters.

"The top tier that we're focusing on right now -- we're seeing that the African-American voters, there's still a lot of undecideds within the community and so we believe that Cory has a real path to victory through those voters," National Press Secretary Sabrina Singh told CBS.

Her comments came just after a Democratic primary debate in which Booker, D-N.J., took on top-tier candidates like Sen. Elizabeth Warren, D-Mass., and former Vice President Joe Biden. Booker also touted his understanding of black voters, saying “I have a lifetime of experience with black voters. I’ve been one since I was 18."

According to RealClearPolitics' polling average, Booker has 1.3 percent of support for the Democratic nomination. He typically polls among the top 10 candidates but lags behind several other Democrats.

Singh, on Friday, touted her candidate as the only one who could win among a diverse group of voters.

"The only person in this race that we believe can build a multiracial coalition and actually win in the general election is Cory Booker.

She pointed to his efforts to work with Republicans on criminal justice reform.

“This is someone that has a proven record of getting things done, he reached out across the aisle to Republicans, Democrats, independents, as mayor of Newark and has gotten things done in the Senate as senator of New Jersey," she said.

"Criminal justice reform has gotten passed, or some parts of it, by this administration thanks to the leadership of Cory Booker and him reaching across the aisle to people like Lindsey Graham and Chuck Grassley who he has, you know, really nothing in common with," she added in reference to two leading Republican senators.