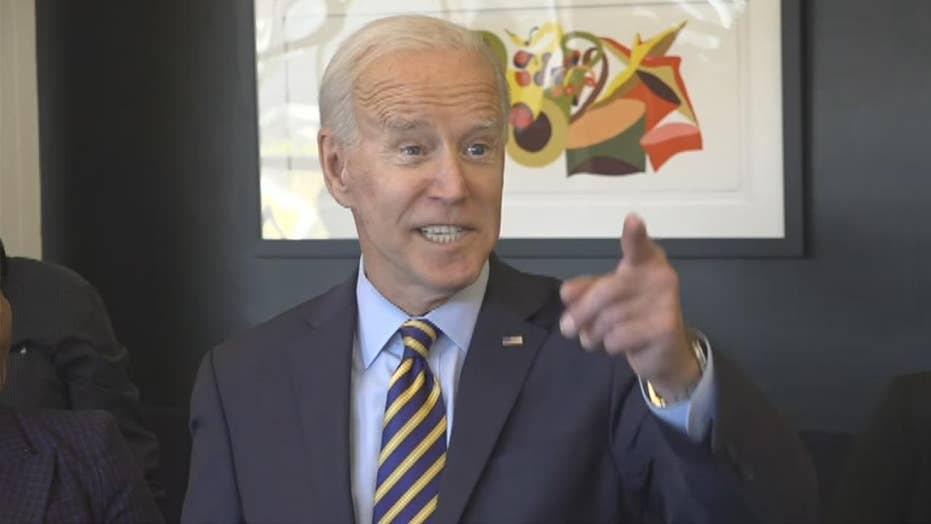 Joe Biden on son Hunter's paternity case: 'That's a private matter, I have no comment'

'Only you would ask that,' the 2020 Democrat presidential candidate says to Fox News correspondent Peter Doocy when asked about a court filing involving his son in Arkansas.

Democratic presidential hopeful Joe Biden tangled with a Fox News reporter on Thursday when the former vice president was asked about a recent report and court filing saying that his son Hunter is the biological father of a baby whose mother he initially denied having sex with.

DNA tests reportedly confirm "with scientific certainty" that Hunter Biden is the father, according to court documents filed in Arkansas on Wednesday.

In a motion to partially seal information about the baby from the public as part of an ongoing child support suit, an attorney for Lunden Alexis Roberts, the child's mom, asked that the name, sex and any other identifying information of the infant, referred to as Baby Doe in court documents, be withheld from public court records to protect the child from any attention associated with Joe Biden's prominency.

The attorney, Clinton Lancaster, informed the court in Independence County that because onetime Vice President Joe Biden "is considered by some to be the person most likely to win his party’s nomination and challenge President Trump on the ballot in 2020,” the child and those close to him or her should be entitled to the same protections afforded to Biden's other kin.

In July, Biden denied having sexual relations with Roberts, according to an article by The New Yorker. He agreed to submit to a paternity test in October. Wednesday's court filings said Biden "is not expected to challenge the results of the DNA test or the testing process."

This isn’t the first time Biden found an issue with Doocy’s questions on the campaign trail.

Back in August, Doocy issued a live fact check when Biden claimed to reporters that he drew larger crowds than other Democratic candidates.

"What I'm trying to do is go around from town to town and I'm drawing as big of crowds, or bigger than anybody," Biden said. "Have you seen anybody draw bigger crowds than me in this state?"

"Yes," Doocy responded before noting that he saw a bigger crowd for Sen. Elizabeth Warren when she visited Des Moines in January.

"The vice president didn't seem to like that because a few minutes later he singled me out," Doocy explained, saying Biden referred to himself as a “big boy” during an exchange.

In September, Biden stuck his finger in Doocy’s face and told him to “ask the right questions” when the reporter attempted to get a comment on Hunter Biden’s overseas business dealings.