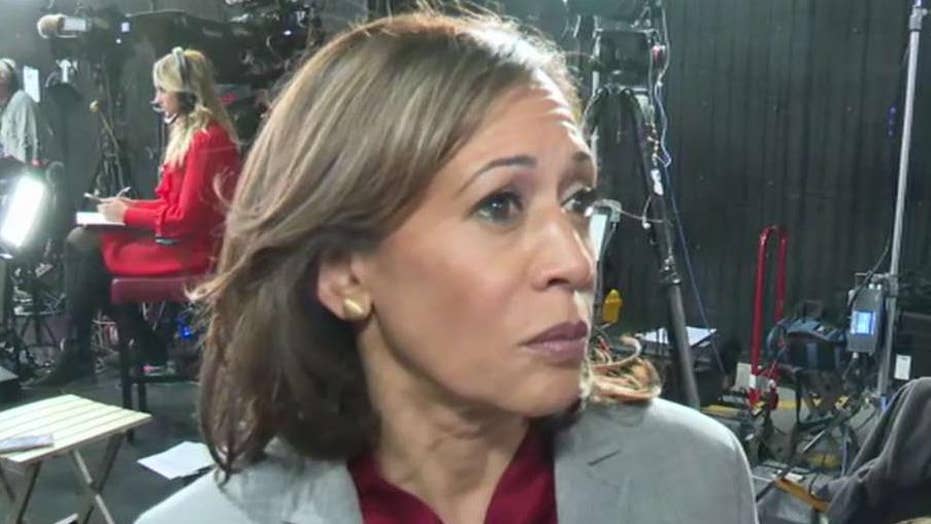 For Sen. Cory Booker of New Jersey, a strong debate performance is literally paying off.

And Sen. Kamala Harris of California -- who like Booker enjoyed praise from the pundits at the fifth-round Democratic primary debate -- is targeting 2020 nomination rival Pete Buttigieg for a second straight day, calling the South Bend mayor's comments at the Wednesday night showdown regarding civil rights "naive."

Harris – a one-time top-tier contender whose campaign’s been on a downward trajectory this autumn – took aim at Buttigieg over his struggles in connecting with black voters, who make up roughly a fifth of likely Democratic presidential primary voters.

After Harris highlighted that Buttigieg’s campaign had used stock photos of minorities on his website, Buttigieg – who if elected would become the nation’s first openly gay president – noted Wednesday that “while I do not have the experience of ever having been discriminated against because of the color of my skin, I do have the experience of sometimes feeling like a stranger in my own country, turning on the news and seeing my own rights come up for debate, and seeing my rights expanded by a coalition of people like me and people not at all like me, working side by side, shoulder to shoulder, making it possible for me to be standing here.”

Harris passed on rebutting Buttigieg on stage, but at a post-debate breakfast Thursday morning she took aim again.

Pointing to what she saw as Buttigieg’s comparison of the civil rights movement to the push for same-sex marriage, Harris emphasized that “it’s important that we not compare struggles. It is not productive. It is not smart. It works against what we need to do which is build coalitions.”

"We know that in our ongoing fight for civil rights, if any one of us starts to differentiate ourselves in a certain way, and in particular what he did on the stage, it's just not productive and I think it's a bit naive," she added.

Buttigieg's campaign says their candidate wasn't making a comparison. And responding to Harris' jab later Thursday morning, Buttigieg told reporters "I think this is a time for solidarity and anyone who has experienced whatever personal struggle we bring to this fight needs to reach into that motivation to help others."

The debate was held in Atlanta, home to a large and vibrant black community and considered the cradle of the country’s civil rights movement.

Buttigieg -- once the longest of long-shots for the nomination -- has seen his campaign soar to top-tier status this autumn as he's surged in the polls in Iowa and New Hampshire, the first two states to vote in the presidential primary and caucus calendar.

Despite the incoming fire he took at the debate, analysts generally gave Buttigieg a thumbs up for his debate performance.

His presidential campaign reported Thursday morning that they hauled in more than a half-million dollars in the nine hours following the end of the debate. They reported back later in the day that their post-debate fundraising total had reached $650,000. And they noted that 70 percent of contributions came from new donors.

Booker enjoyed what many pundits are characterizing as a forceful performance in taking on three of the top-tier contenders.

The senator questioned former Vice President Joe Biden on his opposition to legalizing marijuana, Sen. Elizabeth Warren of Massachusetts on her proposed wealth tax on the ultra-rich -- and brushed off recent efforts by Buttigieg to reach out to black voters, saying “I have a lifetime of experience with black voters. I’ve been one since I was 18” and adding he didn’t “need a focus group” to remind himself what black voters think.

Booker campaign manager Addisu Demissie said that “Cory’s message clearly struck a chord with Democratic voters who want to make sure his voice is a part of the next debate.”

Booker’s post-debate fundraising haul helped him in trying to reach the stage next month. The campaign said the candidate reached the donor threshold to qualify for the Dec. 19 debate, but Booker still remains far short of hitting the polling criteria.