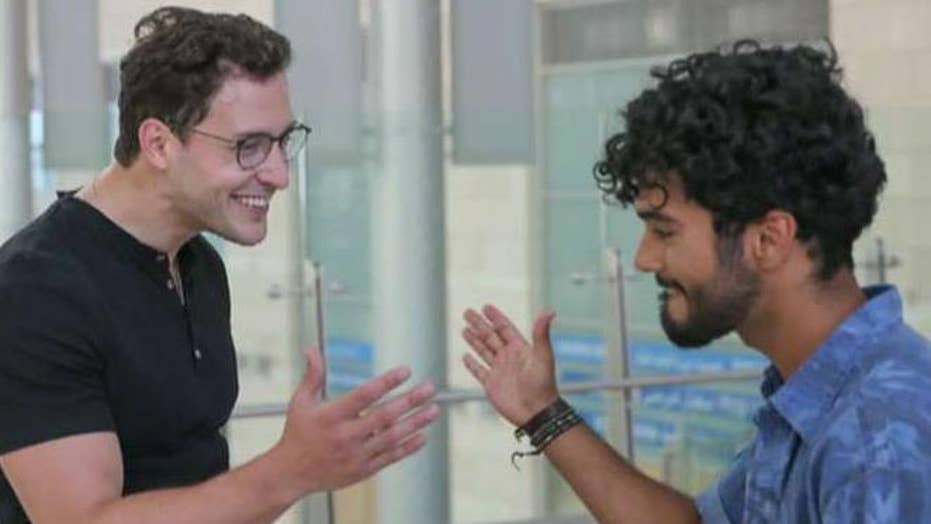 Dr. Mikhail Varshavski, better known as 'Doctor Mike,' comes to the rescue after an airline passenger has an allergic reaction and goes into anaphylactic shock on a flight to the Holy Land.

When a medical emergency erupted on a flight to the Holy Land, a celebrity doctor rose to the occasion and saved the life of a passenger who was traveling to Israel as part of the Birthright program.

Dr. Mikhail Varshavski, a 29-year-old New York physician better known as "Doctor Mike" – who was voted "America's Sexiest Doctor" by People magazine and is a regular on Fox Business – was aboard a Delta flight from New York City's JFK to Tel Aviv's Ben Gurion Airport when the incident occurred.

“I was on the plane, I actually hadn’t eaten anything, but I noticed my hands were swelling. I told the stewardess I was feeling unwell. The team on the plane asked for any doctors on board and Dr. Mike stepped forward," Faraco explained.

The celebrity doctor, who was traveling with America's Voices in Israel, a non-profit that sends high-profile personalities to the Holy Land with a mission to foster a greater understanding of Israel in the United States, jumped into action.

"I felt my throat start to close," Faraco said. "I don’t normally have allergies and there was no EpiPen on the plane. Dr. Mike was able to use what was on board to help me, and he stayed with me and monitored my vitals for the rest of the flight. All I can say is how thankful I am. He really saved me.”

The two reunited in Jerusalem on Thursday.

“We were facing a real dilemma, over the ocean with a patient in a life-threatening situation," Dr. Mike recounted. "While the plane was not equipped with an EpiPen, luckily the Delta team did have an advanced life support kit which included the Epinephrine. We needed to do some troubleshooting, adjusting the dosage and working out how to administer the medicine. We were able to work it out and administer it into his leg muscle - that for sure hurt but was the best option. Had we left the situation to deteriorate we would have risked having to open his airways with an incision."

He concluded: "Thankfully the drug worked and his airways opened. We had to monitor his heart and breathing and now it’s great to see him back to full health.”

Dr. Mike, who emigrated with his family from Saransk, Russia, to Brooklyn, New York, at the age of 6, shared a photo from Save a Child's Heart, a humanitarian organization that does pediatric cardiac care for children around the world who can't afford or get adequate medical care in their home countries, with his 3-million-plus Instagram followers as his trip to Israel continues. He completed his Family Medicine Residency in 2017.