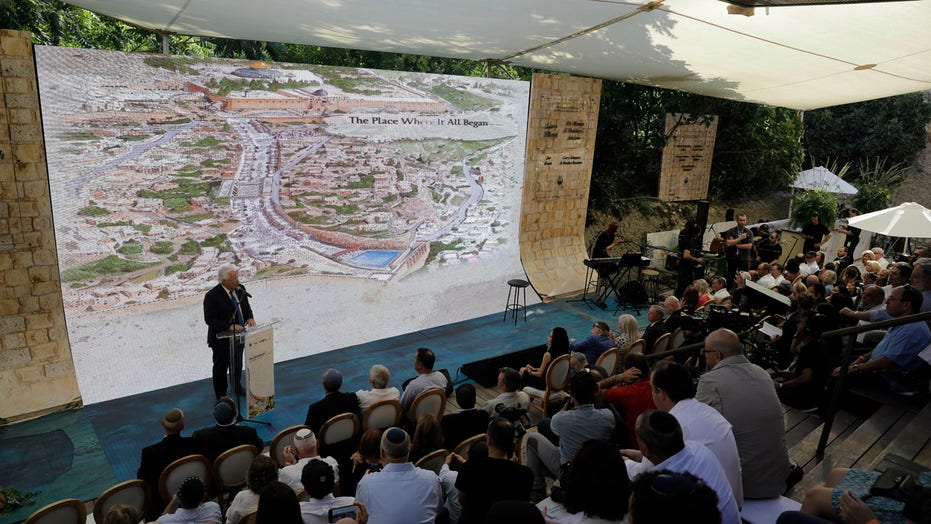 David Friedman, U.S. ambassador to Israel, weighs in on the finding of Pilgrimage Road.

Israel officially opened a stairway, known as "Pilgrim's Road," that Jesus is believed to have walked on in ancient Jerusalem as another place with the significance of "biblical proportions" to billions, especially for Judeo-Christian visitors to the Holy Land.

The City of David Foundation unveiled the 2,000-year-old main thoroughfare from Roman-era Jerusalem that it says served pilgrims ascending to the ancient Jewish Temple from the Pool of Siloam built by King Hezekiah. Until recently, it was hidden under a potato field and discovered by accident in 2004 after a pipe burst.

The Trump Administration celebrated the new unveiling that took place a little over a year after President Trump officially opened the U.S. embassy in Jerusalem with a ceremony Sunday attended by U.S. Ambassador to Israel David Friedman and three other visiting American ambassadors as well as Trump's Mideast negotiator, Jason Greenblatt, and Sen. Lindsey Graham, R-S.C.

"It brings the Bible back to life," Friedman told Pete Hegseth, who has a special on "Fox Nation" about the newly discovered road. "From a sewage pipe that burst 15 years ago came these excavations that resulted in the discovery of the Pool of Siloam, where all the Jewish pilgrims would come and cleanse themselves before ascending to the Temple and then an entire road, not a relic, not an antiquity, but an entire road intact from that pool ascending to the Temple.."

U.S. Ambassador to Israel David Friedman, left, White House Mideast envoy Jason Greenblatt, center, and Lindsey Graham, U.S. Senator from South Carolina, attend the opening of an ancient road at the City of David, a popular archaeological and tourist site in the Palestinian neighborhood of Silwan in east Jerusalem. The site is located on what many believe to be the ruins of the biblical King David's ancient capital and see as centerpieces of ancient Jewish civilization, but critics accuses the operators of pushing a nationalistic agenda at the expense of local Palestinian residents. (AP Photo/Tsafrir Abayov, Pool)

He added: "People can literally immerse themselves in that environment, where the great biblical figures of the time where Jesus walked, we know that Jesus took this road. We know His visits to the Temple are well-documented. So you really have the opportunity to immerse yourself in ancient history in this incredible, stunning discovery."

Friedman said as Americans celebrate the Fourth of July and look back at the Founding Fathers and the biblical language they infused in the United States' founding documents, that the Word of God read by the Founders came from Jerusalem.

"When we think of America and its beginnings, well the physical beginnings we could think about Plymouth Rock or we could think about Valley Forge...but the spiritual underpinning, the bedrock of our principles as a nation, comes from Jerusalem," Friedman added. "So this site is a heritage site for America as well as for Israel. It's one of the best examples of that unbreakable bond, that ancient bond between the people of the United States and the people of Israel."

People take selfies inside an ancient tunnel during the opening of an ancient road at the City of David, a popular archaeological and tourist site in the Palestinian neighborhood of Silwan in east Jerusalem. The site is located on what many believe to be the ruins of the biblical King David's ancient capital and see as centerpieces of ancient Jewish civilization, but critics accuses the operators of pushing a nationalistic agenda at the expense of local Palestinian residents. (AP Photo/Tsafrir Abayov, Pool)

Visitors will be able to "touch history" by walking in the footsteps of ancient pilgrims through a 350-yard stretch of tunnel along the ancient street that ran uphill to the Jewish temple, the City of David Foundation said.

“The discovery of the Pilgrimage Road was an unprecedented scientific feat of biblical proportions,” Doron Spielman, vice president of the City of David Foundation wrote in a Times of Israel op-ed. “Unlike most archaeological digs which begin from the ground down, this excavation was done subterraneously, beneath the hustle and bustle of modern Jerusalem. Dozens of fiber optic cable cameras were used to decipher where to excavate, while maps and diagrams made by archaeologists over the last century and a half paved the way forward.”