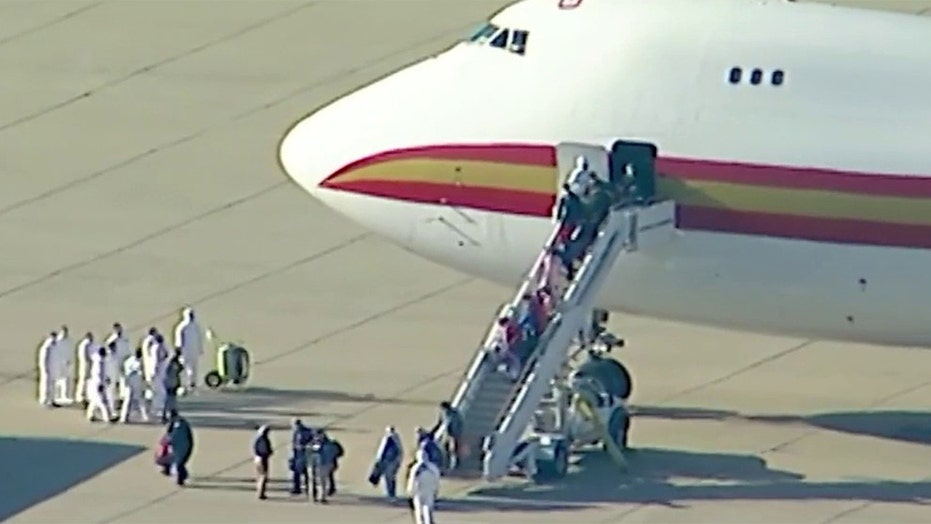 A flight carrying 110 British and foreign nationals who were evacuated out of China over the coronavirus landed at Royal Air Force Brize Norton in Oxfordshire shortly before 2 p.m. local time. The passengers, which included 83 British and 27 foreign nationals, were accompanied by a number of medics who were equipped to "provide support."

“We know how distressing the situation has been for those waiting to leave,” Britain’s Foreign Secretary Dominic Raab said in a notice on Friday. “We have been working round the clock to clear the way for a safe departure. The welfare of those trapped and public safety have been our overriding priorities."

The plane will then travel to Spain where the passenger's home countries will take responsibility for them, the notice said. Chinese officials had originally blocked the flight on Thursday morning, which expected to leave Wuhan with 200 people.

Travelers wear face masks as they prepare to board a train at the Beijing Railway Station in Beijing, Friday, Jan. 31, 2020.  (AP Photo/Mark Schiefelbein)

Meanwhile, people in China are defying a lockdown by leaving and entering a bridge over the Yangzte River in Hubei province -- the country's virus epicenter. It's been on lockdown for vehicles, but people could still get out in "special circumstances," according to Reuters.

Countries around the globe have increased travel restrictions to the infected mainland China and Hubei province -- with the U.S. State Department increasing its advisory to level 4: "Do Not Travel."

Coronavirus has now infected more people in China than were sickened during the SARS outbreak in the early 2000s. No deaths have been reported outside of the country.

The death toll from the virus has increased to 213 on Friday, with a total of 9,692 infected. The number of cases has increased more than tenfold in a week, with 43 new deaths reported on Friday, the most in a 24-hour-period.

Roughly 99 percent of new cases have appeared in China with the vast majority of the cases in Hubei province and its provincial capital, Wuhan. The virus has been reported in at least 16 countries globally.

The United States currently has six cases of the virus: two in California, one in Arizona, one in Washington and two in Illinois, health officials say. The sixth case was confirmed Thursday in a Chicago resident, who is the spouse of the first confirmed travel-related case in Illinois. The new case marks the first in the U.S. that occurred via person-to-person transmission, CDC officials said.

"Those currently in China should consider departing using commercial means. The Department of State has requested that all non-essential U.S. government personnel defer travel to China in light of the novel coronavirus,"  The advisory said.

The United Kingdom and New Zealand also advised their people against nonessential travel to China.

Italy suspended all flights to China

United Airlines, the largest U.S. airline to China suspended some flights to hub cities in China and reduced daily departures from 12 to four.

United's pilots, concerned for their safety, will be able to drop trips to China without pay, a union memo said, according to Reuters.

Lufthansa suspending flights to and from China until Feb. 9