Neither Texans nor Chick-fil-A should stand for such intolerance and bigotry by the government, the First Liberty Institute's Keisha Russell says.

Chick-fil-A is taking the high road in response to a handful of liberal critics alleging the popular fast food restaurant is hostile to LGBTQ individuals.

The executive director of the Chick-fil-A Foundation and Chick-fil-A's vice president of corporate social responsibility, Rodney Bullard, told Business Insider the Christian-owned company has "a much higher calling than any political or cultural war that's being waged."

The chain, which closes on Sundays and is known for its employees who respond "It's my pleasure" after serving chicken sandwiches and waffle fries, came under a lightning rod of controversy after CEO Dan Cathy supported "the biblical definition of the family unit" in 2012 and donated millions to the conservative and Christian groups.

New York City mayor and newly announced Democratic presidential candidate Bill de Blasio tried to ban Chick-fil-A from the city for Cathy's stance, which backfired as the Big Apple is now the home of the world's largest Chick-fil-A. 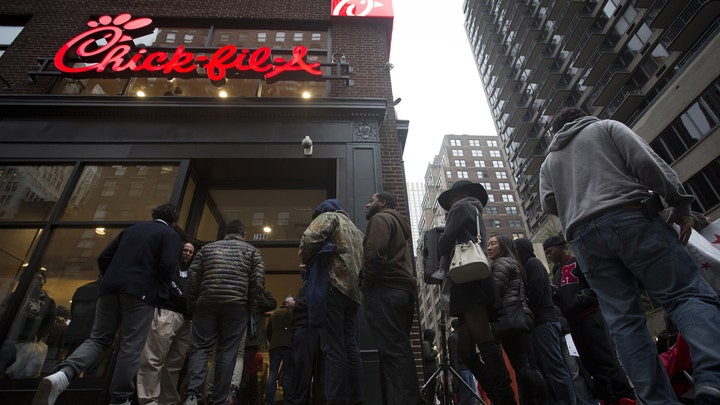 Liberal cities and college campuses are also now trying to ban Chick-fil-A because of its donations to groups like the Salvation Army and the Fellowship of Christian Athletes and because Cathy has espoused a traditional view of marriage.

The chain has over 300 partnerships, most of which are focused on helping low-income youth and economic inequality.

“We are proud of the impact we’ve been able to make so far, and we have a lot yet to do,” Bullard said in a press release on its website.

Bullard told Business Insider Chick-fil-A would consider donating to an LGBTQ organization if the partnership was "impactful" and "authentic."

The Chick-fil-A Foundation supports the Salvation Army's camps for kids and its Angel Tree Program, which gives underprivileged kids gifts during the holiday season.

The company's support of Fellowship of Christian Athletes goes toward summer sports camps the Chick-fil-A Foundation has hosted for years to introduce inner-city Atlanta youth to new sports, such as golf, tennis, and archery.

Chick-fil-A said its corporate purpose is to "glorify God by being a faithful steward of all that is entrusted to us. To have a positive influence on all who come in contact with Chick-fil-A."