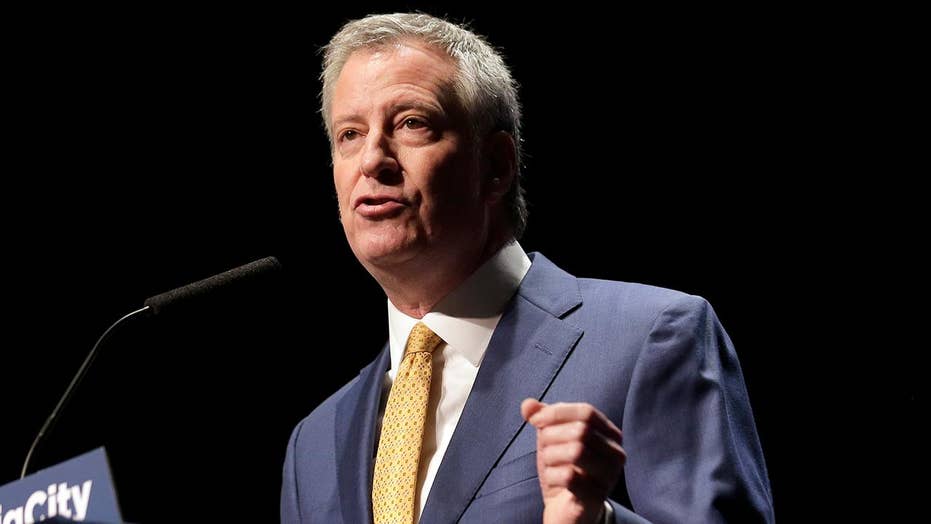 New York City Mayor Bill de Blasio announced Thursday morning that he will seek the Democratic nomination for president in 2020, saying President Trump "must be stopped."

De Blasio is the 23rd Democrat to officially announce a bid for the White House and the second this week following Montana Gov. Steve Bullock’s announcement on Tuesday.

The second-term mayor’s central platform will be “working people first.”

“Doesn’t matter if you live in a city or a rural area, a big state, small state. Doesn't matter what your ethnicity is. People in every part of this country felt stuck or even like they're going backwards,” he said in his announcement video posted online.

De Blasio took direct aim at Trump, calling him a “bully,” adding that “I know how to take him on.”

“Don’t back down in the face of a bully, confront him … Donald Trump must be stopped, I’ve beaten him before and I will do it again.”

De Blasio touted his experience as mayor as his qualifications, including raising the city’s minimum wage to $15 an hour, approving a legal guarantee for paid sick leave and a fully comprehensive guaranteed healthcare system.

“We built an agenda that puts working families first.”

De Blasio has already visited early-voting states, including visits to Iowa and New Hampshire. A spokesperson told Fox News on Wednesday that he plans to travel again to Iowa on Friday and South Carolina on Saturday.

De Blasio had teased his announcement for some time. Most recently, he appeared at a press conference in the lobby of Trump Tower in New York City on Monday. He appeared to be laying the groundwork for his announcement but was met by a crowd of protesters at a raucous rally promoting the city’s Green New Deal.

The mayor said in his video announcement on Thursday that if elected, he will look to counter many of the controversial policies of the Trump administration, including family separations and backing out of the Paris agreement.

“I will not rest until this government serves working people,” he said.

Republican National Committee Communications Director Michael Ahrens said the mayor's far-left positions were a symptom of the state of the Democratic Party.

"Bill de Blasio is a liberal extremist who wants the government to control everything from your health care to what you eat," Ahrens said in a statement. "Americans can rest assured that he won't win, but unfortunately his socialist policies fit right in with the rest of his comrades in the race."