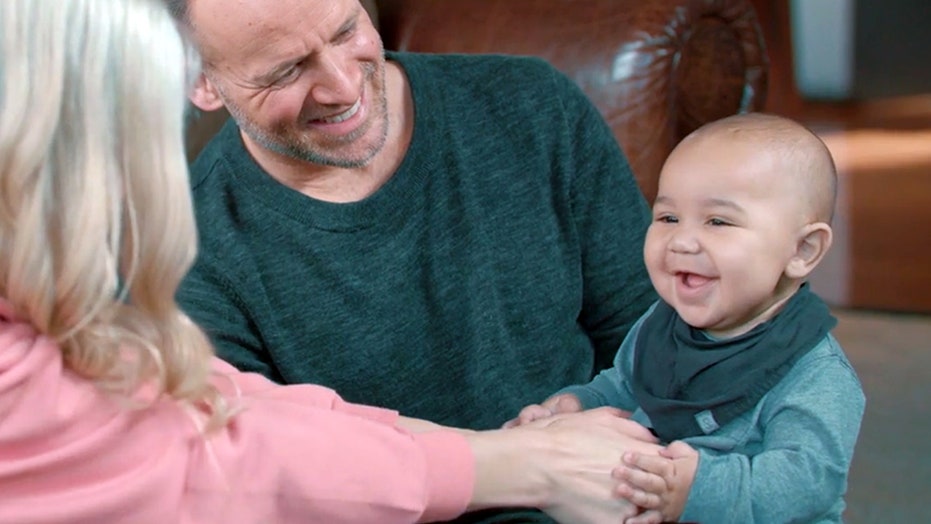 Worship leaders Brian and Jenn Johnson hope to inspire others to adopt, or at least support the adoption movement after their son Ryder Moses changed their lives.

The co-founders of Bethel Music in Redding, Calif., told Fox News their fourth child, whose name means "adopted deliverer," was a gift from God at just the right time.

2-YEAR-OLD’S 'MIRACLE' HEALING SPARKED WORSHIP ANTHEM: ‘WE BELIEVE IN THE POWER OF PRAISE’

"It was like heaven met our heart,” Jenn said between sessions of the Heaven Come conference that was held in Los Angeles and Dallas. "And I just felt like the Lord said 'I have this for you if you want this, like a gift, I have a present for you'...and it was like 'yes' before you even asked."

Jenn Johnson speaks on the opening night of "Heaven Come" in downtown Los Angeles May 23, 2019, holding her adopted son, Ryder Moses, and alongside her husband, Brian. (Courtesy: Mary Caroline Russell and Jordana Griffith)

A short time later, Jenn called her friend and fellow singer-songwriter, Rita Springer, who knew before Jenn even got the words out of her mouth: "The Lord told me years ago that you would [adopt], but I wasn't to tell you until He told you."

The next day, Jenn started the paperwork with Christian Adoption Consultants. In just one month, they had completed the process faster than anyone before them.

Christian Adoption Consultants matches couples with women who wish to put their children up for adoption. Both parties must agree before a match is made. The Johnsons were matched with a birth mother on just their third try.

Brian and Jenn Johnson with their two-year-old son, Ryder Moses.

And that bond shocked a judge of 45 years.

"She came to final closure ceremony in the courtroom and the judge said that’s the first time in his entire career he’d ever seen a birth mother come to the finalization of adoption," Johnson added. "It was just one thing after the next, just amazing."

During the adoption process, Jenn found herself driving on a long country road when she recorded a song on her phone about the "faithfulness" and "kindness of God." That impromptu recording session produced "Goodness of God."

The Johnsons, who brought Ryder on stage in front of thousands at the "Heaven Come" conference, said their adoption has inspired many others and they hope it will inspire even more.

"I just think to encourage people, ask the Holy Spirit how you apply the call that we are called to take care of widows and orphans, how are you doing that and how is God is asking [you] to do that?" Johnson said. "And maybe it’s not to adopt a child into your family, maybe it is, but maybe it’s to give to someone that wants to adopt but can’t afford it, but really to carry the heart of adoption and to make sure that we’re staying connected to it and sacrificing for it."